Why The Hermès Birkin Bag is a Better Investment Than Gold 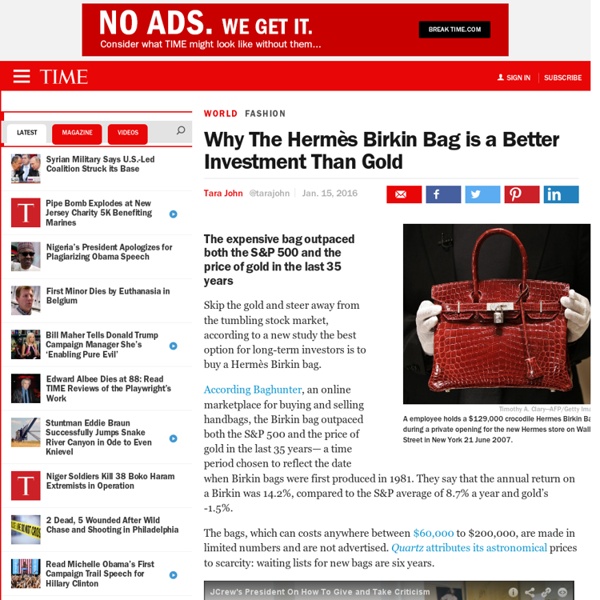 Economy Of Fashion: How Different Trends Reflect The Financial State It's common knowledge fashion is cyclical in nature. The concept of “newness” in fashion doesn't refer to the premiere of a trend, but rather its revival. Why fashion cycles in this manner, however, is less obvious. There are lots of factors at play: cultural trends, politics, celebrity influence. One one of the most surprising factors to influence the cycle of fashion, though, is the state of the global economy. If you think about it, it makes sense. Britain Now World's Cheapest Luxury Market LONDON, United Kingdom — In the wake of Britain's vote to leave the EU, which pushed down the value of the pound about 10 percent against the euro, the country has become the cheapest luxury goods market in the world, helping to buoy British luxury labels, at least in the short term, according to new research by Luca Solca, the head of luxury goods at Exane BNP Paribas. "The Brexit vote has made the UK the cheapest market in the world for luxury goods,” Solca told BoF. “A weak British pound will boost travel inflows to the UK, helping British luxury goods players like Burberry, Mulberry and Jimmy Choo." While luxury goods companies are not expected to raise prices in the UK in the coming months — at least until there is more clarity around exactly when and how the country might exit the EU — Britain should see a boost from tourist inflows and spending due to its weakened currency.

Brexit 'means economy faces 50/50 recession chance' Image copyright Reuters The UK has a 50/50 chance of falling into recession within the next 18 months following the Brexit vote, says a leading economic forecaster. The National Institute of Economic and Social Research (NIESR) says the country will go through a "marked economic slowdown" this year and next. It says inflation will also pick up, rising to 3% by the end of next year.

Rising costs pile on the agony for Britain’s fashion retailers From culottes to “cold shoulder” tops and woven loafers last seen in Miami Vice, many Britons have struggled with this summer’s fashions, but now there is an even more unpalatable trend on the horizon – in the shape of higher prices. The devaluation of sterling following the June Brexit vote has had major ramifications for store chiefs who pay in dollars for large quantities of imported goods. The first indication of where prices could be heading came last week from Next, one of the UK’s biggest clothing retailers, which pencilled in increases of up to 5% in 2017. “We have always taken the view that if our costs go up, our selling prices will go up,” said Next chief executive Lord Wolfson. But fashion retailers are already struggling to persuade shoppers to part with their cash as weak wage growth is compounded by a cyclical shift towards spending on eating out and other leisure activities. Kantar analyst Glen Tooke says its most recent reading shows the decline deepening.

Primark blames the weather for falling sales Image copyright Getty Images A warm winter and a cold spring has been blamed for a fall in sales at low-cost fashion retailer Primark. Shoppers left winter clothes on the rails in the run up to Christmas due to unusually warm weather, and a cold March and April depressed sales of summer clothes. As a result Primark, like other stores, had to cut the price tag to sell them. Mulberry luxury goods maker sees profit treble Image copyright Getty Images Luxury goods company Mulberry sees profits treble following switch to focus on more affordable products. The company, best known for its leather handbags, saw annual pre-tax profits in the year to 31 March jump from £1.9m to £6.2m. Sales rose by 5% to £155.9m. Mulberry has struggled in recent years as a result of the company's failed attempt to compete with higher end brands, such as Prada and Fendi. Chief executive Thierry Andretta said it had made "significant progress".

Luxury footwear brand Jimmy Choo boosted by weaker pound Celebrity-favourite footwear brand Jimmy Choo has posted rising profits and said it expects a weaker pound in the wake of Brexit to further boost revenues and profits. The luxury shoes and accessories firm, popular with the likes of Jennifer Lopez and Sandra Bullock, said that because only 9.5 per cent of its global revenues are in pounds compared to a larger 28 per cent of operating costs, a weaker sterling ‘will lead to a reported upside in business performance at a revenue and profit level’. The comment came as Jimmy Choo posted a 43 per cent rise in operating profits for the six months to the end of June to £25.3million boosted by a weak pound, as well as growth in China and in its men's coillection. Luxury appetite: Jimmy Choo said it saw ‘impressive’ growth in China, which has been a tough market for its competitors recently While being well-known for its skyscraper heels, Jimmy Choo's men’s line and handbags have also been doing well.

How Zara's founder became the richest man in the world - for two days Image copyright AFP/Getty Images Browsing the rails at Zara, you might not be aware of this: but there's an 80-year-old grandfather in northern Spain who helped pick out what you're taking to the till. Amancio Ortega stepped down as chief executive at Zara's owner, Inditex, five years ago.

Why Americans Aren't Shopping NEW YORK, United States — The US economy hasn’t looked as bright since before the dark days of the Great Recession. In April 2016, the unemployment rate held steady at 5 percent. The same month, 160,000 new jobs were created. (Less than projected and slower than in recent cycles, but still double than what is needed to keep up with population growth, according to economists.)