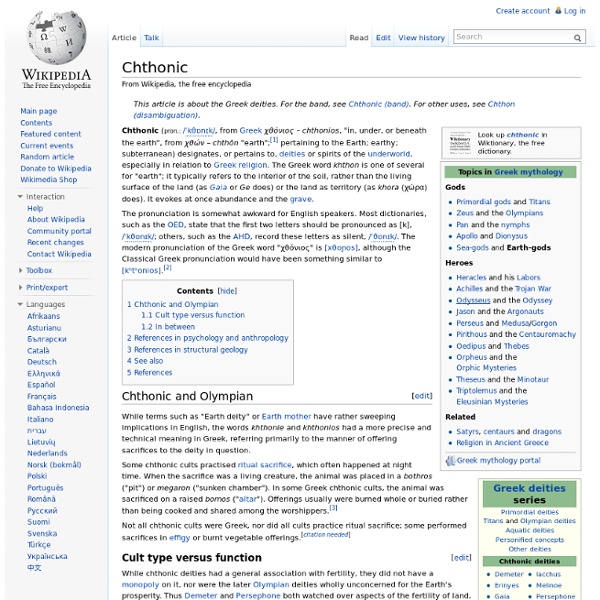 Some dictionaries, such as the OED, state that the first two letters should be pronounced (as /k/), /ˈkθɒnɪk/, while others, such as the AHD, record these letters as silent, /ˈθɒnɪk/. The modern pronunciation of the Greek word "χθόνιος" is [ˈxθonios],[2] although the Classical Greek pronunciation would have been [ktʰónios]. Chthonic and Olympian[edit] While terms such as "Earth deity" or Earth mother have sweeping implications in English, the words khthonie and khthonios had a more precise and technical meaning in Greek, referring primarily to the manner of offering sacrifices to the deity in question. Some chthonic cults practised ritual sacrifice, which often happened at night time. Cult type versus function[edit] While chthonic deities had a general association with fertility, they did not have a monopoly on it, nor were the later Olympian deities wholly unconcerned for the Earth's prosperity. In between[edit] The categories Olympian and chthonic were not, however, completely separate.

Family tree of the Greek gods Key: The essential Olympians' names are given in bold font. See also List of Greek mythological figures Notes External links Media related to Family trees of Greek mythology at Wikimedia Commons Greek Gods Family Tree ludios.org Aether (mythology) In Greek mythology, Aether or Aither (Æthere, Ancient Greek: Αἰθήρ, pronounced [aitʰɛ̌ːr]), also known as Akmon or Acmon in Latin (possibly from the same route as "Acme") is one of the primordial deities, the first-born elementals. Aether is the personification of the upper air.[1] He embodies the pure upper air that the gods breathe, as opposed to the normal air (ἀήρ, aer) breathed by mortals. Like Tartarus and Erebus, Aether may have had shrines in ancient Greece, but he had no temples and it is unlikely that he had a cult. Hyginus ... started his Fabulae with a strange hodgepodge of Greek and Roman cosmogonies and early genealogies. The fifth Orphic hymn to Aether describes the substance as "the high-reigning, ever indestructible power of Zeus," "the best element," and "the life-spark of all creatures The Theoi Project, "AITHER"

Pan (god) In Greek religion and mythology, Pan (/ˈpæn/;[1] Ancient Greek: Πᾶν, Pān) is the god of the wild, shepherds and flocks, nature of mountain wilds, hunting and rustic music, and companion of the nymphs.[2] His name originates within the Ancient Greek language, from the word paein (πάειν), meaning "to pasture."[3] He has the hindquarters, legs, and horns of a goat, in the same manner as a faun or satyr. With his homeland in rustic Arcadia, he is recognized as the god of fields, groves, and wooded glens; because of this, Pan is connected to fertility and the season of spring. The ancient Greeks also considered Pan to be the god of theatrical criticism.[4] The Roman Faunus, a god of Indo-European origin, was equated with Pan. The worship of Pan began in Arcadia which was always the principal seat of his worship. Representations of Pan on 4th century BC gold and silver Pantikapaion coins Pan is famous for his sexual powers, and is often depicted with a phallus. Christian apologists such as G.

Religion in ancient Greece Many Greek people recognized the major (Olympian) gods and goddesses: Zeus, Poseidon, Hades, Apollo, Artemis, Aphrodite, Ares, Dionysus, Hephaestus, Athena, Hermes, Demeter, Hestia, and Hera though philosophies such as Stoicism and some forms of Platonism used language that seems to posit a transcendent single deity. Different cities often worshiped the same deities, sometimes with epithets that distinguished them and specified their local nature. The religious practices of the Greeks extended beyond mainland Greece, to the islands and coasts of Ionia in Asia Minor, to Magna Graecia (Sicily and southern Italy), and to scattered Greek colonies in the Western Mediterranean, such as Massalia (Marseille). Greek religion was tempered by Etruscan cult and belief to form much of the later Ancient Roman religion. Beliefs Zeus, the king of the gods, and controller of thunder and the sky. While there were few concepts universal to all the Greek peoples, there were common beliefs shared by many.

Greek mythology Greek mythology is explicitly embodied in a large collection of narratives, and implicitly in Greek representational arts, such as vase-paintings and votive gifts. Greek myth attempts to explain the origins of the world, and details the lives and adventures of a wide variety of gods, goddesses, heroes, heroines, and mythological creatures. These accounts initially were disseminated in an oral-poetic tradition; today the Greek myths are known primarily from Greek literature. Archaeological findings provide a principal source of detail about Greek mythology, with gods and heroes featured prominently in the decoration of many artifacts. Sources Literary sources The poetry of the Hellenistic and Roman ages was primarily composed as a literary rather than cultic exercise. Finally, a number of Byzantine Greek writers provide important details of myth, much derived from earlier now lost Greek works. Archaeological sources Survey of mythic history Origins of the world and the gods

Iliad The Iliad (sometimes referred to as the Song of Ilion or Song of Ilium) is an ancient Greek epic poem in dactylic hexameter, traditionally attributed to Homer. Set during the Trojan War, the ten-year siege of the city of Troy (Ilium) by a coalition of Greek states, it tells of the battles and events during the weeks of a quarrel between King Agamemnon and the warrior Achilles. Although the story covers only a few weeks in the final year of the war, the Iliad mentions or alludes to many of the Greek legends about the siege; the earlier events, such as the gathering of warriors for the siege, the cause of the war, and related concerns tend to appear near the beginning. Then the epic narrative takes up events prophesied for the future, such as Achilles' looming death and the sack of Troy, prefigured and alluded to more and more vividly, so that when it reaches an end, the poem has told a more or less complete tale of the Trojan War. Synopsis[edit] The first verses of the Iliad Achaeans[edit]

Odyssey Greek text of the Odyssey's opening passage The Odyssey (Greek: Ὀδύσσεια, Odýsseia) is one of two major ancient Greek epic poems attributed to Homer. It is, in part, a sequel to the Iliad, the other work ascribed to Homer. The poem is fundamental to the modern Western canon, and is the second oldest extant work of Western literature, the Iliad being the oldest. It is believed to have been composed near the end of the 8th century BC, somewhere in Ionia, the Greek coastal region of Anatolia.[1] The poem mainly centers on the Greek hero Odysseus (known as Ulysses in Roman myths) and his journey home after the fall of Troy. It continues to be read in the Homeric Greek and translated into modern languages around the world. The Odyssey has a lost sequel, the Telegony, which was not written by Homer. Synopsis[edit] Exposition[edit] The Odyssey begins ten years after the end of the ten-year Trojan War (that is the subject of the Iliad), and Odysseus has still not returned home from the war.

The Labyrinth of Crete, the myth of the Minotaur Zeus, in the form of a bull, brought Europe from the Phoenician seashore to Gortys in Crete where he made love with her under a plane tree (or on the plane tree after assuming the form of another sacred animal, the eagle), since then the plane tree was blessed to never lose its leaves (evergreen). From their union three sons were born triplets (or two twins). Next, Zeus arranged the marriage of Europe to the Cretan King Asterion (or Asterio), who appointed Europe's and Zeus' sons as his successors. -> Read more about Gortys -> Read more about the Abduction of Europe by Zeus As promised, the three sons of Europe and Zeus (Minos or Minoas, Radamanthis, Sarpidon) succeeded King Asterion to the throne of Crete. The gods loved Minos because his father, Zeus, honored him above all. Once, wanting to offer a sacrifice in honor of his uncle Poseidon, Minos asked Poseidon to send the best bull he could find from the sea. -> Read more about the Minoan Palace of Knossos -> Read more about Daedalus