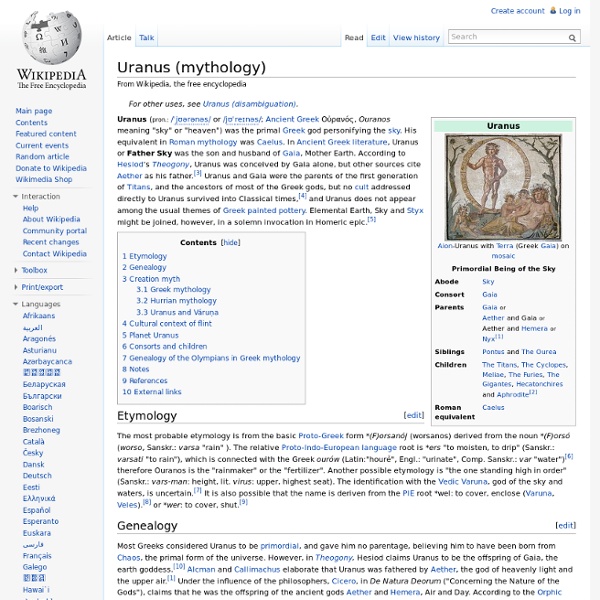 Uranus imprisoned Gaia's youngest children in Tartarus, deep within Earth, where they caused pain to Gaia. She shaped a great flint-bladed sickle and asked her sons to castrate Uranus. Only Cronus, youngest and most ambitious of the Titans, was willing: he ambushed his father and castrated him, casting the severed testicles into the sea. William Sale remarks that "... 'Olympus' is almost always used of [the home of the Olympian gods], but ouranos often refers to the natural sky above us without any suggestion that the gods, collectively live there".[17] Sale concluded that the earlier seat of the gods was the actual Mount Olympus, from which the epic tradition by the time of Homer had transported them to the sky, ouranos. By the sixth century, when a "heavenly Aphrodite" (Urania) was to be distinguished from the "common Aphrodite of the people", ouranos signifies purely the celestial sphere itself. The Greek creation myth is similar to the Hurrian creation myth.

Ishtar Ishtar (pronounced /ˈɪʃtɑːr/; Transliteration: DIŠTAR; Akkadian: 𒀭𒈹 ; Sumerian 𒀭𒌋𒁯) is the East Semitic Akkadian, Assyrian and Babylonian goddess of fertility, love, war, and sex.[1] She is the counterpart to the Sumerian Inanna, and is the cognate for the Northwest Semitic Aramean goddess Astarte. Characteristics[edit] Ishtar was the goddess of love, war, fertility, and sexuality. Ishtar was the daughter of Ninurta.[2] She was particularly worshipped in northern Mesopotamia, at the Assyrian cities of Nineveh, Ashur and Arbela (Erbil).[2] Besides the lions on her gate, her symbol is an eight-pointed star.[3]

Moai Moai facing inland at Ahu Tongariki, restored by Chilean archaeologist Claudio Cristino in the 1990s Moai i/ˈmoʊ.aɪ/, or mo‘ai, are monolithic human figures carved by the Rapa Nui people from rock on the Chilean Polynesian island of Easter Island between the years 1250 and 1500.[1] Nearly half are still at Rano Raraku, the main moai quarry, but hundreds were transported from there and set on stone platforms called ahu around the island's perimeter. Aether (mythology) In Greek mythology, Aether or Aither (Æthere, Ancient Greek: Αἰθήρ, pronounced [aitʰɛ̌ːr]), also known as Akmon or Acmon in Latin (possibly from the same route as "Acme") is one of the primordial deities, the first-born elementals. Aether is the personification of the upper air.[1] He embodies the pure upper air that the gods breathe, as opposed to the normal air (ἀήρ, aer) breathed by mortals. Like Tartarus and Erebus, Aether may have had shrines in ancient Greece, but he had no temples and it is unlikely that he had a cult. Hyginus ... started his Fabulae with a strange hodgepodge of Greek and Roman cosmogonies and early genealogies. It begins as follows: Ex Caligine Chaos.

Kāla (time) Head of Kala carved on top of Kidal temple portal, East Java. Kālá (Sanskrit: काल, IPA: [kɑːˈlə]) is a Sanskrit word which means "Time".[1] It is also the name of a deity in which sense it is not always distinguishable from kāla meaning "black". It often used as one of the various names or forms of Yama. Monier-Williams's widely used Sanskrit-English dictionary[2] lists two distinct words with the form kāla. kāla 1 means "black, of a dark colour, dark-blue ..." and has a feminine form ending in ī – kālī – as mentioned in Pāṇini 4-1, 42.kāla 2 means "a fixed or right point of time, a space of time, time ... destiny, fate ... death" and has a feminine form (found at the end of compounds) ending in ā, as mentioned in the ṛgveda Prātiśākhya.

Micah Hanks on a plethora of the paranormal plus the Paradigm Symposium - Panama City Paranormal My good friend Micah Hanks has been on my radio show The Church of Mabus radio show more times than I can count right now. From our Halloween special to a special show about Folk devils and many other fine topics. Always a wealth of knowledge and information regarding the weird and paranormal. List of Germanic deities In Germanic paganism, the indigenous religion of the ancient Germanic peoples that inhabited Germanic Europe, there were a number of different gods and goddesses. Germanic deities are attested from numerous sources, including works of literature, various chronicles, runic inscriptions, personal names, place names, and other sources. This article presents a comprehensive list of these deities. Gods[edit]