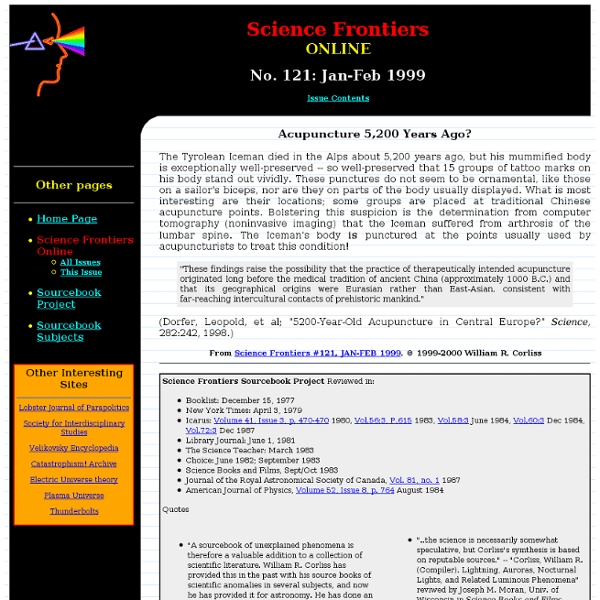 Acupuncture 5,200 Years Ago? The Tyrolean Iceman died in the Alps about 5,200 years ago, but his mummified body is exceptionally well-preserved -- so well-preserved that 15 groups of tattoo marks on his body stand out vividly. These punctures do not seem to be ornamental, like those on a sailor's biceps, nor are they on parts of the body usually displayed. What is most interesting are their locations; some groups are placed at traditional Chinese acupuncture points. Bolstering this suspicion is the determination from computer tomography (noninvasive imaging) that the Iceman suffered from arthrosis of the lumbar spine. The Iceman's body is punctured at the points usually used by acupuncturists to treat this condition!

White Europeans 'only evolved 5,500 years ago after food habits changed' By Daily Mail Reporter Updated: 13:58 GMT, 31 August 2009 People in England may have only developed pale skin within the last 5,500 years, according to new research. Scientists believe that a sudden change in the diet around that time from hunter-gathering to farming may have led to a dramatic change in skin tone to make up for a lack of vitamin D.

The Piri Re‘is map of 1513 The controversial Piri Re’s map The map drawn by Piri Re‘is dated to the month of Muharrem 919 AH (corresponding to spring 1513 CE) is well known in the fringe literature. Piri Re‘is was an admiral of the Turkish navy and this map, showing the Atlantic Ocean, West Africa, the Iberian Peninsula and lands on the western side of the Ocean, seems to have been based on twenty different maps. One of them has been thought to be a copy of the lost map made by Christopher Columbus, as Piri’s own annotations claim as much. The map was rediscovered by the Director of National Museums, Halil Etem Edhem (1861-1938), when the Topkapi Serail Palace in Istanbul was being converted into a museum in 1929. The map was subsequently studied by a prominent German orientalist, Paul Kalhe (1875-1964), who reported on it at the eighteenth Congress of Oriental Studies in Leiden in 1931.

Deadly time vortex appears over Antarctica Sector of erupting anomalies. Disturbing news has been leaking out from the giant continent at the bottom of the world. Some scientists manning lonely outposts under the drifting and shifting aurora are nearly paralyzed with fear. Their clipped reports are being reviewed by astonished superiors back in the home countries. Russian researchers posted near the giant South Pole sub-glacial Lake Vostok have reported eerie anomalies and incidents over the past few years that sometimes seem to border on the frayed edge of creeping madness.

Göbekli Tepe Archeology Lately, I've come across a number of stories in the news about very ancient archeological sites, which pre-date the Egyptian Pyramids by a fair bit. Although some very ancient sites are known (for example, the oldest remains in Jericho have been dated to about 9000 BC), I was under the impression that these were very fragmentary (perhaps known only by a hearth fire or a few stone structures), and little detailed information exists. Gobekli Tepe is located in southern Turkey, just north of the Syrian border. I've seen several other intriguing reports about very ancient sites in the Gulf of Cambay in India, Syria, etc. But the site at Göbekli Tepe in Turkey seems to be the most ancient and also relatively well studied, so I decided to collect what information I could find about it.

Signs of Atlantis found in southern Spain: scientists - Health Scientists say they may have discovered the lost city of Atlantis buried deep under the marshlands of southern Spain. The legendary city is believed to have been "swallowed up by the sea," as the Greek philosopher Plato so famously put it 2,400 years ago. He wrote of a great city destroyed by floodwaters following an earthquake deep under the sea — an image that resonates at a time when Japan is struggling to recover from a devastating earthquake and tsunami off its northeast coast.

Ley-lines There are several developed theories on the purpose of ley-lines, many of which offer valid potential; something which in itself illustrates the complexity of unravelling the myriad of alignments from several millennia of activity. It is likely that ley-lines are a product of different elements from several of the following theories, being created at different times, for different purposes. The following examples are the current contenders for explaining how such a dedication to straight-lines has led mankind its present position. It is important to recognise the distinction between ley-lines and geometric alignments. Points Newsletter - Acupuncture, Headaches, and the Heart - Part 1 - March 2015 Acupuncture, Headaches, and the Heart - Part 1 By Marie Veverka, Dipl., OM In 2010, I traveled to China to study with Dr. Heiner Fruehauf and Chinese masters Liu Lihong, Wang Qingyu and Liu Yousheng.

Top 10 Civilizations That Mysteriously Disappeared Throughout our history, most civilizations have either met a slow demise or were wiped out by natural disasters or invasion. But there are a few societies whose disappearance has scholars truly stumped: 10. The Olmec One of the first Mesoamerican societies, the Olmec inhabited the tropical lowlands of south-central Mexico. The first signs of the Olmec are around 1400 BC in the city of San Lorenzo, the main Olmec settlement which was supported by two other centers, Tenochtitlan and Potrero Nuevo. Ziggurat of Ur-Nammu: Most Intriguing Mysteries of Lost Civilizations Ziggurat of Ur-Nammu: Today, no sign of the temple remains, although treasures of considerable sophistication have been found in the royal residences and tombs that were built in the temple. Ziggurat of Ur-Nammu: Most Intriguing Mysteries of Lost Civilizations By Mr Ghaz, December 22, 2010