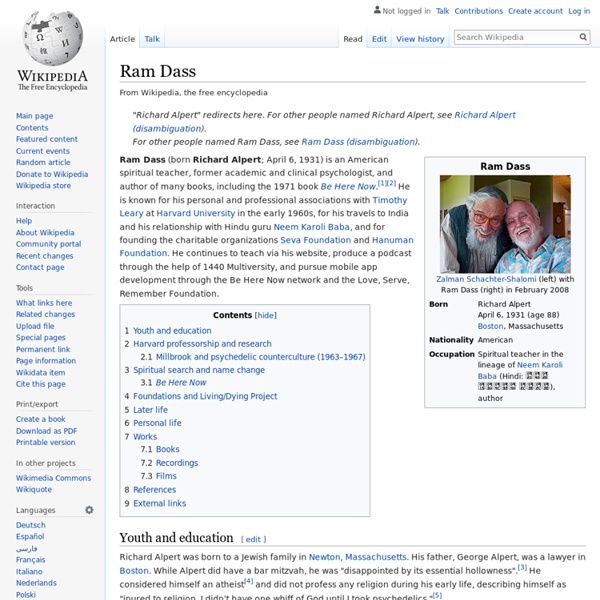 Youth and education[edit] Richard Alpert was born to a Jewish family in Newton, Massachusetts. His father, George Alpert, was a lawyer in Boston. While Alpert did have a bar mitzvah, he was "disappointed by its essential hollowness".[3] He considered himself an atheist[4] and did not profess any religion during his early life, describing himself as "inured to religion. I didn’t have one whiff of God until I took psychedelics. Harvard professorship and research[edit] McClelland moved to Cambridge to teach at Harvard University, and helped Alpert accept a tenure-track position there in 1958 as an assistant clinical psychology professor.[5][7][8] Alpert worked with the Social Relations Department, the Psychology Department, the Graduate School of Education, and the Health Service, where he was a therapist. Millbrook and psychedelic counterculture (1963–1967)[edit] In 1967 Alpert gave talks at the League for Spiritual Discovery's center in Greenwich Village.[19] Be Here Now[edit] Works[edit] Related:  Spirit

Maharishi Mahesh Yogi Maharishi Mahesh Yogi (12 January 1918[1] – 5 February 2008) was born Mahesh Prasad Varma and obtained the honorific Maharishi (meaning "Great Seer")[2][3] and Yogi as an adult.[4][5] He developed the Transcendental Meditation technique and was the leader and guru of a worldwide organization that has been characterized in multiple ways including as a new religious movement and as non-religious.[6][7][8] Maharishi Mahesh Yogi became a disciple and assistant of Swami Brahmananda Saraswati, the Shankaracharya (spiritual leader) of Jyotirmath in the Indian Himalayas. The Maharishi credits Brahmananda Saraswati with inspiring his teachings. The Maharishi is reported to have trained more than 40,000 TM teachers, taught the Transcendental Meditation technique to "more than five million people" and founded thousands of teaching centers and hundreds of colleges, universities and schools,[17][18][19] while TM websites report tens of thousands learned the TM-Sidhi programme. Life[edit] Birth[edit]

Marilyn Ferguson Marilyn Ferguson, circa 1980. Marilyn Ferguson (April 5, 1938 in Grand Junction, Colorado – October 19, 2008) was an American author, editor and public speaker, best known for her 1980 book The Aquarian Conspiracy and its affiliation with the New Age Movement in popular culture. A founding member of the Association of Humanistic Psychology,[citation needed] Ferguson published and edited the well-regarded science newsletter Brain/Mind Bulletin from 1975 to 1996. She eventually earned numerous honorary degrees, served on the board of directors of the Institute of Noetic Sciences, and befriended such diverse figures of influence as inventor and theorist Buckminster Fuller, spiritual author Ram Dass, Nobel Prize-winning chemist Ilya Prigogine and billionaire Ted Turner. Ferguson's work also influenced Vice President Al Gore, who participated in her informal network while a senator and later met with her in the White House. Youth and early writing career[edit] The Aquarian Conspiracy[edit]

John Muir In his later life, Muir devoted most of his time to the preservation of the Western forests. He petitioned the U.S. Congress for the National Park bill that was passed in 1890, establishing Yosemite and Sequoia National Parks. Muir's biographer, Steven J. Early life[edit] Muir was born in the small house at left. John Muir's birthplace was a four-story stone house in Dunbar, East Lothian, Scotland. At age 22, Muir enrolled at the University of Wisconsin–Madison, paying his own way for several years. Photo taken in 1872 In 1863 his brother Dan left Wisconsin for Canada to avoid the draft. Muir returned to the United States in March 1866, winding up in Indianapolis to work as a sawyer in a factory that made wagon wheels; he was paid $22 a week. In September 1867, Muir undertook a walk of about 1,000 miles (1,600 km) from Indiana to Florida, which he recounted in his book A Thousand-Mile Walk to the Gulf. Explorer of nature[edit] California[edit] Experiencing Yosemite A Yosemite creek

Marilyn Ferguson - Wikipedia Marilyn Ferguson (April 5, 1938 in Grand Junction, Colorado – October 19, 2008) was an American author, editor and public speaker, best known for her 1980 book The Aquarian Conspiracy and its affiliation with the New Age Movement in popular culture. A founding member of the Association of Humanistic Psychology,[citation needed] Ferguson published and edited the well-regarded science newsletter Brain/Mind Bulletin from 1975 to 1996. She eventually earned numerous honorary degrees, served on the board of directors of the Institute of Noetic Sciences, and befriended such diverse figures of influence as inventor and theorist Buckminster Fuller, spiritual author Ram Dass, Nobel Prize-winning chemist Ilya Prigogine and billionaire Ted Turner. Ferguson's work also influenced Vice President Al Gore, who participated in her informal network while a senator and later met with her in the White House. Youth and early writing career[edit] The Brain Revolution and Brain/Mind Bulletin[edit] Books[edit]

Henri Lefebvre Henri Lefebvre (French: [ləfɛvʁ]; 16 June 1901 – 29 June 1991) was a French Marxist philosopher and sociologist, best known for pioneering the critique of everyday life, for introducing the concepts of the right to the city and the production of social space, and for his work on dialectics, alienation, and criticism of Stalinism and structuralism. In his prolific career, Lefebvre wrote more than sixty books and three hundred articles.[1] Biography[edit] In 1961, Lefebvre became professor of sociology at the University of Strasbourg, before joining the faculty at the new university at Nanterre in 1965.[7] He was one of the most respected professors, and he had influenced and analysed the May 1968 students revolt.[8] Lefebvre introduced the concept of the right to the city in his 1968 book Le Droit à la ville[9][10] (the publication of the book predates the May 1968 revolts which took place in many French cities). Lefebvre died in 1991. The critique of everyday life[edit] "Change life!

Vedanta Vedanta (/vɪˈdɑːntə/; Hindustani pronunciation: [ʋeːd̪aːn̪t̪], Devanagari: वेदान्त, Vedānta) is one of the six orthodox schools of Hindu philosophy. The term literally translates to "the end of Veda" or "the conclusion of Veda," and originally referred to the Upanishads, a collection of foundational texts in Hinduism (considered the last appendix or final layer of the Vedic canon). By the 8th century,[citation needed] it came to mean all philosophical traditions concerned with interpreting the three basic texts of Hinduist philosophy, namely the Upanishads, the Brahma Sutras and the Bhagavad Gita, and was eventually recognized as distinct from the other five astika schools. Vedanta is the most prominent and philosophically advanced of the orthodox schools and the term Vedanta may also be used to refer to Indian philosophy more generall. Etymology[edit] The name is a morphophonological form of Veda-anta = "Veda-end" = "the appendix to the Vedic hymns". The three basic texts[edit]

Fenwicke Holmes Fenwicke Lindsay Holmes (1883-1973) was an American author, former Congregational minister, and Religious Science leader. The brother of Ernest Holmes, Fenwicke is widely recognized for being an important factor in the establishment of Religious Science and the founding of the United Centers for Spiritual Living. Fenwicke is recognized as an important figure in the development of the New Thought movement in Japan in particular Seicho-no-ie. Throughout his career Holmes served as a Congregational Church minister and as the pastor of a Divine Science Church. Holmes wrote more than twenty books, lectured for fifty years around the world, and frequently spoke on radio and television. Biography[edit] Born on a farm near Lincoln, Maine in 1883, Fenwicke was one of nine boys. He attended the Hart­ford Theological Seminary and was ordained in the Congregational church. Career[edit] In Venice, Fenwicke founded a Congregational Church where he ministered for six years. Bibliography[edit]

Be Here Now (book The book is divided into four sections: The first section is a short autobiography, describing his successes as a psychologist, his research with Timothy Leary into psychedelics at Harvard, and his subsequent anxiety when this research does not resolve his spiritual questions. He then describes his first journey to India and his initiation into a Guru-chela relationship with Neem Karoli Baba, and spiritual renaming as Baba Ram Dass, or "servant of god". Ram Dass closes the first section of the book with this passage: Now, though I am a beginner on the path, I have returned to the West for a time to work out karma or unfulfilled commitment. The second section, the largest, is a free-form collection of metaphysical, spiritual, and religious aphorisms, accompanied by illustrations. The last section, entitled "Painted Cakes Do Not Satisfy Hunger" (a Zen commentary on liturgy), contains a list of recommended books on religion, spirituality, and consciousness. Official website

Margaret Fuller - Wikipedia Sarah Margaret Fuller Ossoli (May 23, 1810 – July 19, 1850), commonly known as Margaret Fuller, was an American journalist, editor, critic, and women's rights advocate associated with the American transcendentalism movement. She was the first full-time American female book reviewer in journalism. Her book Woman in the Nineteenth Century is considered the first major feminist work in the United States. Born Sarah Margaret Fuller in Cambridge, Massachusetts, she was given a substantial early education by her father, Timothy Fuller, who died in 1835 due to cholera[1]. She later had more formal schooling and became a teacher before, in 1839, she began overseeing her Conversations series: classes for women meant to compensate for their lack of access to higher education.[2] She became the first editor of the transcendentalist journal The Dial in 1840, which was the year her writing career started to succeed[3], before joining the staff of the New York Tribune under Horace Greeley in 1844.

You You (stressed /ˈjuː/, unstressed /jə/) is the second-person personal pronoun, both singular and plural, and both nominative and oblique case, in Modern English. The oblique (objective) form you functioned previously in the roles of both accusative and dative, as well as all instances after a preposition. The possessive forms of you are your (used before a noun) and yours (used in place of a noun). Usage[edit] Everyday speech among large sections of the population in Northern England commonly used and still uses dialect versions of thou, thee, thy, and thine. Informal plural forms[edit] Despite you being both singular and plural, some dialects retain the distinction between a singular and plural you with different words. y'all, or you all – southern United States[1] and African American Vernacular Englishyou guys – U.S.,[2] particularly in the Midwest, Northeast, and West Coast; Canada, Australia. Third person usage[edit] You is usually a second person pronoun. Etymology[edit]

Global Country of World Peace The Global Country of World Peace (GCWP) was declared by Maharishi Mahesh Yogi , the founder of Transcendental Meditation , on Vijayadashami (Victory Day), October 7, 2000. [ 1 ] He described it as "a country without borders for peace-loving people everywhere". [ 2 ] [ 3 ] GCWP is structured as a kingdom, with Tony Nader as its current Maharaja or Sovereign Ruler. [ 4 ] It became incorporated in the state of Iowa , USA on October 15, 2002 as a nonprofit organization with Bevan Morris as its president. [ 5 ] The corporation has its headquarters in Maharishi Vedic City , Iowa . [ 5 ] [ 6 ] It has, or is building, capitals in the Netherlands, Iowa, Kansas, West Virginia, Manhattan, and India. The GCWP made attempts to obtain sovereignty as a micronation during the years 2000 to 2002, offering sums in excess of $1 billion to small and impoverished countries in exchange for the sovereignty over part of their territory. Mission [ edit ] Raam currency [ edit ] Raam note. Europe and India [ edit ]

Thích Nhất Hạnh Thích Nhất Hạnh (/ˈtɪk ˈnjʌt ˈhʌn/; Vietnamese: [tʰǐk ɲɜ̌t hɐ̂ʔɲ] ( ); born October 11, 1926) is a Vietnamese Zen Buddhist monk, teacher, author, poet and peace activist. He lives in the Plum Village Monastery in the Dordogne region in the South of France,[1] travelling internationally to give retreats and talks. Nhất Hạnh has published more than 100 books, including more than 40 in English. Biography[edit] Buddha hall of the Từ Hiếu Temple Born as Nguyễn Xuân Bảo, Nhất Hạnh was born in the city of Quảng Ngãi in Central Vietnam in 1926. In 1956, he was named editor-in-chief of Vietnamese Buddhism, the periodical of the Unified Vietnam Buddhist Association (Giáo Hội Phật Giáo Việt Nam Thống Nhất). Nhat Hanh is now recognized as a Dharmacharya and as the spiritual head of the Từ Hiếu Temple and associated monasteries.[7][10] On May 1, 1966 at Từ Hiếu Temple, Thich Nhat Hanh received the "lamp transmission", making him a Dharmacharya or Dharma Teacher, from Master Chân Thật.[7] Approach[edit]