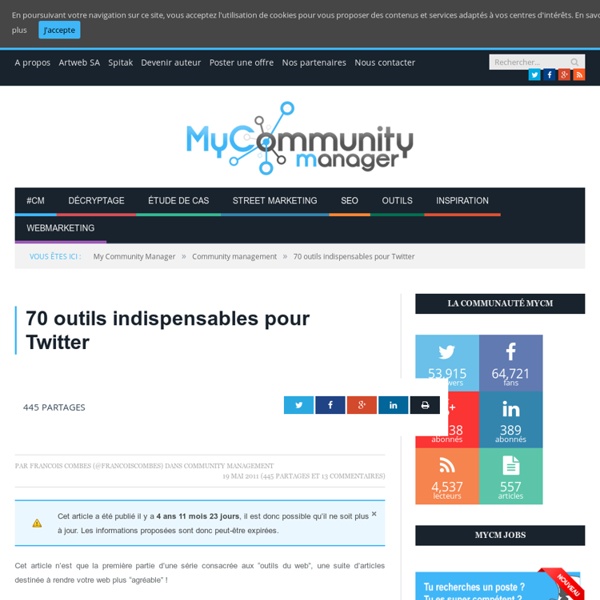 Twitter 101: 55 Tips to Get Retweeted on Twitter Retweets, you have heard about them, you know what they are but you aren’t gettin’ them. For some reason you just can’t seem to get the engagement you are seeking, desiring and yearning for in social media and Twitter. You may be new to Twitter and simply don’t know what the heck you are doing, how to get a retweet or why the retweets even matter. This post won’t teach you what Twitter is but provides good tips for tweetable content which you need regardless if you know what you’re doing or not (joking). Or you may be a Twitter and social media veteran who just wants to boost your ego, increase your Klout score or simply show off for Grandpa this weekend how popular you are on the social waves?

Topsy - Real-time search for the social web With iOS 9, Search lets you look for content from the web, your contacts, apps, nearby places, and more. Powered by Siri, Search offers suggestions and updates results as you type. There are two ways to use Search on your iOS device. Quick Search Drag down from the middle of the Home screen and type what you're looking for. Siri Suggestions Domain Name Search Results Important Information for your .PRO Domain Order You must be a licensed business professional or business entity to register a .pro domain. Your license must be in good standing with, a government certification body or jurisdictional licensing entity recognized by a governmental body, which body requires that its members be licensed or admitted to a certifying or licensing entity and regularly verifies the accuracy of its data. A government body may include, for example, your country, state/province, county, or city government. You must be able to provide evidence of your license including*:

10 Awesome Twitter Analytics and Visualization Tools Recently Twitter rolled out their native analytics platform for all users and now you can get some quality data about your tweets directly from Twitter. After researching over a thousand Twitter Tools for the Twitter Tools Book I came across many Twitter analytics and visualization tools. These Twitter tools were designed to add value by presenting a different way to visualize or analyze your tweets, the people in your network, and the tweets from the people in your network. Many tools tried to add value and failed. Reddit is launching its own news site called Upvoted Reddit, the social aggregator countless publishers already crib news from, is starting its own news site. The new venture is called Upvoted, and when it launches on Tuesday, will dig out interesting comments, pictures, videos, and other posts from Reddit itself, providing more context on their background through interviews with the Reddit users behind the stories. But while Reddit will be the source for Upvoted's posts, the new site won't copy its structure — comments aren't enabled, and there's no way to actually upvote (or downvote) Upvoted's stories. Users can't comment on Upvoted's stories Upvoted is to be maintained by a dedicated editorial team of about ten people, responsible for finding stories on Reddit, verifying details, interviewing their posters, and packaging the details up for easy reading. "The stuff our community creates on a daily basis blows our mind," Upvoted's editorial team told Wired.

10 Innovative Twitter Tools For The Busy Freelancer Twitter is one of the most valuable channels online. Using it to connect with potential clients or simply building a strong network is crucial. Yet, moving forward on Twitter can also be very time consuming. Finding tools which help us to focus more on the work we are doing is key. The internet is eating our memory, but something better is taking its place In the years since the world started going digital, one of the big changes has been that we don’t need to remember very much. Why risk forgetting a partner’s birthday or a dinner date with a close friend when you can commit the details to your computer, laptop, smartphone or tablet and get a reminder at the appropriate time? Paul McCartney gave a useful insight into this in an interview in the summer. He claimed that back in the 1960s The Beatles may have written dozens of songs that were never released because he and John Lennon would forget the songs the following morning. We would write a song and just have to remember it.

3 Tips for More Effective Twitter Brand Pages in Share in Share 18 Throughout the end of 2011 we saw many changes from all of the main social media networks. These changes will affect the way social media marketing occurs this year. One of the biggest announcements near the end of the year were Twitter brand pages . La petite histoire de la fin des commentaires Earlier this week, Vice’s technology and science news site Motherboard dropped its comments section, opting to replace it with an old school “letters to the editor” feature. Then Reddit launched a news site called Upvoted that didn’t include a comments section. (You can still comment on the stories on Reddit itself.) What’s going on here? For years, comment boxes have been a staple of the online experience. You’ll find them everywhere, from The New York Times to Fox News to The Economist.