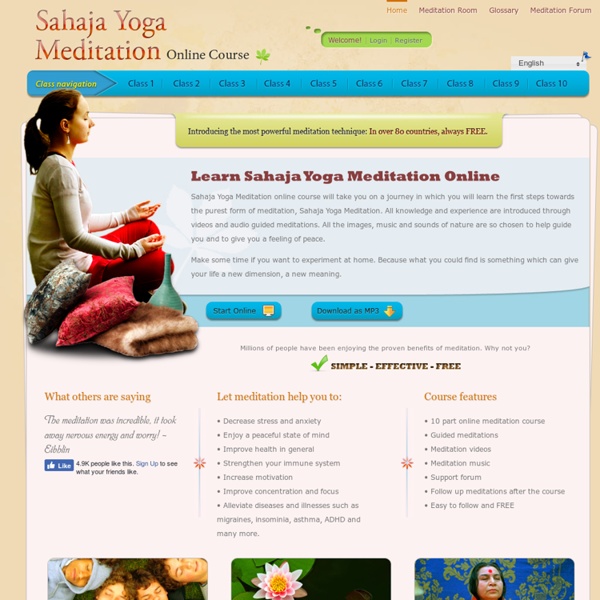 Meditation techniques Sahaja Yoga Meditation is about tapping into one’s spiritual energy, firstly by recognizing that it exists through Enlightenment (Self-realization), and thereafter by using it to improve one’s life. It is important to remember that Sahaja Yoga is not a philosophy of blind faith, it is a truth which is physically verifiable by all those who practice it, via the cool breeze or vibrations that one feels on the hands or head. It may be easier, therefore, to consider Sahaja Yoga as the discovery of a sixth sense – the world of vibrations. For instance after Enlightenment (Self-realization), if you should take a stroll around a prestigious art gallery, it is possible to feel the vibrations which emanate from certain old masters such as the Mona Lisa, which were painted with the true love of an artist and not simply for commercial gain as with much modern ‘art’. There are many techniques for clearing any blockage that we might feel in our subtle body. Next: Meditation tips for beginners

RFI Apprendre à écouter Exercice d'écoute © DR - Marguerite Duras À l’occasion du centenaire de la naissance de Marguerite Duras, découvrez ou redécouvrez-la à travers le conte pour enfants Ah ! Ernesto. Cet extrait donne à entendre le style et la voix inimitables de Marguerite Duras. Exercices proposés par Isabelle Cros What is meditation? - Meditation Explanation Despite all its popularity, today very few of us truly know what meditation is. Some regard meditation is the mental concentration on something, others consider that we meditate when we imagine something that gives us peace or satisfaction. All these methods are being with one goal to slow down and, eventually, completely stop the incessant activity of our minds. These exercises are not really meditation – they are substitutes for meditation because it is normally very difficult to stop our minds all-together. In reality, meditation is a state of thoughtless awareness. It is not an act of doing – it is a state of awareness. When we take a look at the various explanations of meditation, another thing we often see is that meditation is defined as taking a moment to sit quietly or to ponder. Concentration Concentration is an effort to fix the attention on a particular object or idea for a long period of time. The growing emphasis on: [1] Hassed C. Next: How does meditation work?

What is so special about the word ‘OM’? While browsing net I just stumbled upon this question and a meaningful response by Chris Peter. Some how I had this question always at back of my mind to which I didnt’ got practical and logical answer which could quench my avidity. The below explanation is by Chris Peter(some parts are though edited by me..), which I just felt to share.. So here it is: Forget the philosophy, find out for yourself! First, know that OM is actually 3 sounds, Aaaaa, Uuuuu, and Mmmmm.Aaaaa is chanted with the mouth wide open. Most of the world’s major religions have a slight variation on OM. Like this: Like Loading... Related

Humanising Language Teaching Magazine for teachers and teacher trainers Year 17; Issue 3June 2015 You can copy this entire edition to your computer and read it when you want. Just click here for instructions. You are also able to download every issue from 1999-2009 each in their own zip file. Editorial Introducing this issue of HLT Magazine Contributor's Guidelines Major Articles The Transactional Analysis Motivation Model as a Framework of Reference for Teachers and TrainersPaolo Torresan, Italy First Language Acquisition: Revisiting the Social Interactionist ParadigmMansoor Fahim and Mohammad Amerian, Iran Blogging in Second Language Writing: Synthesis of ResearchSamah Elbelazi, USA The Process of Implementation of Bilingual Education Programs in Chosen Primary Schools in EuropeBarbara Muszyńska, Poland and M. Jokes 20 Local Newspaper Stories That Could Only Happen In Kent Short Articles Ideas from the Corpora Google Giveth and Google Taketh, Developments in Google as a CorpusMuralee Navaratnam, France Lesson Outlines Student Voices Publications An Old Exercise Poems

Stop Thinking So Much Video - Use the Honey Trick to control a woman's primal, emotional brain and make her desperate to be with you! by De La Soul The human mind is a funny thing. It is the mind, inside you which controls whether you succeed or not in almost everything in life. If you can master your mind, you will come off as a cool, confident, powerful man. The mind has 2 parts: The first part is like the computer of your brain. However, the second part of the mind is what ultimately controls whether you succeed or not -- the ego. Let me give you an example. In a game of football when you need to make a tackle, you will execute the tackle most effectively if you clear your mind of all useless info and let your brain's computer take control. This is because when you fed your brain with all the extra info it got confused, and presumed you were scared and needed safety, so you swung your arms ineffectively. The same can be said when approaching a woman. I also believe this is why the 3 second rule works. Also see:

Humanity Crossing the Karmic Plain Past Life Regression 'Therapy' Increasing as I meet and work with evolving souls in the far flung corners of the world, people are regressing quickly into their past life karma. This is extremely positive, because it's karma that has brought people back into incarnation and which needs to be processed in order to ascend into the New Paradigm. It's karma that has created the chaotic and convoluted reality we're now living in. What is karma? I'd say the first thing is to establish exactly what karma is, because you'll hear different interpretations. To me, karma occurs where the soul becomes identified and therefore attached to the physicality of life. When the soul attaches in this way, then it essentially experiences the sense of disconnection from the source, loses a 'fragment' of itself in an eddy current, identifies with the illusion, takes on distorted behaviours and therefore deposits karmic energy within the causal body - within the fourth density. How is karma experienced?