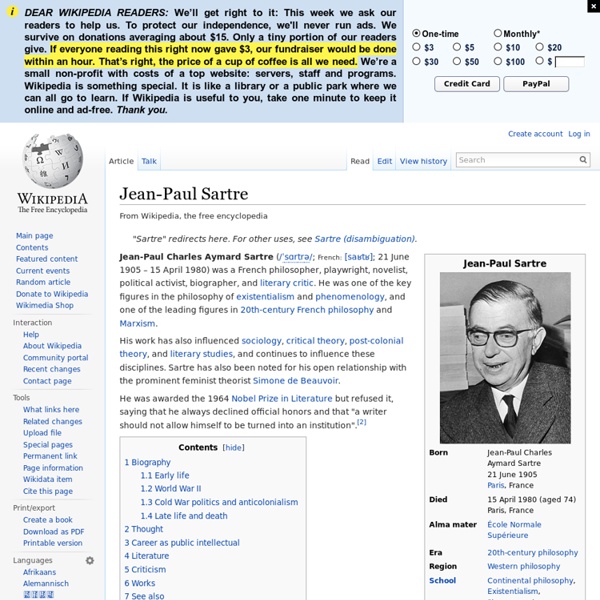 His work has also influenced sociology, critical theory, post-colonial theory, and literary studies, and continues to influence these disciplines. Sartre has also been noted for his open relationship with the prominent feminist theorist Simone de Beauvoir. He was awarded the 1964 Nobel Prize in Literature but refused it, saying that he always declined official honors and that "a writer should not allow himself to be turned into an institution".[2] Biography[edit] Early life[edit] Jean-Paul Sartre was born in Paris as the only child of Jean-Baptiste Sartre, an officer of the French Navy, and Anne-Marie Schweitzer.[3] His mother was of Alsatian origin and the first cousin of Nobel Prize laureate Albert Schweitzer. In 1929 at the École Normale, he met Simone de Beauvoir, who studied at the Sorbonne and later went on to become a noted philosopher, writer, and feminist. World War II[edit] French journalists visit General George C. Cold War politics and anticolonialism[edit]

Related:  The problems with philosophy • - • Philosophy

Pre-established harmony Overview[edit] Leibniz's theory is best known as a solution to the mind–body problem of how mind can interact with the body. Leibniz rejected the idea of physical bodies affecting each other, and explained all physical causation in this way. Under pre-established harmony, the preprogramming of each mind must be extremely complex, since only it causes its own thoughts or actions, for as long as it exists. Phenomenology (philosophy) Phenomenology (from Greek: phainómenon "that which appears" and lógos "study") is the philosophical study of the structures of experience and consciousness. As a philosophical movement it was founded in the early years of the 20th century by Edmund Husserl and was later expanded upon by a circle of his followers at the universities of Göttingen and Munich in Germany. It then spread to France, the United States, and elsewhere, often in contexts far removed from Husserl's early work.[1] Phenomenology, in Husserl's conception, is primarily concerned with the systematic reflection on and study of the structures of consciousness and the phenomena that appear in acts of consciousness. This ontology (study of reality) can be clearly differentiated from the Cartesian method of analysis which sees the world as objects, sets of objects, and objects acting and reacting upon one another.

Søren Kierkegaard Danish philosopher, theologian, poet, social critic, and religious author Søren Aabye Kierkegaard ( SORR-ən KEER-kə-gard, also -⁠gor; Danish: [ˈsœːɐn ˈkʰiɐ̯kəˌkɒˀ] ( listen);[7] 5 May 1813 – 11 November 1855[8]) was a Danish philosopher, theologian, poet, social critic, and religious author who is widely considered to be the first existentialist philosopher.[9][10] He wrote critical texts on organized religion, Christendom, morality, ethics, psychology, and the philosophy of religion, displaying a fondness for metaphor, irony, and parables. Kierkegaard's theological work focuses on Christian ethics, the institution of the Church, the differences between purely objective proofs of Christianity, the infinite qualitative distinction between man and God, and the individual's subjective relationship to the God-Man Jesus the Christ,[15] which came through faith.[16][17] Much of his work deals with Christian love. Early years (1813–1836)[edit] Troels Frederik Lund September 1920

Nicolas Malebranche Nicolas Malebranche, Oratory of Jesus (; French: [nikɔlɑ malbrɑ̃ʃ]; 6 August 1638 – 13 October 1715), was a French Oratorian[1] priest and rationalist philosopher. In his works, he sought to synthesize the thought of St. Augustine and Descartes, in order to demonstrate the active role of God in every aspect of the world. Malebranche is best known for his doctrines of vision in God, occasionalism and ontologism. René Girard René Noël Théophile Girard (;[2] French: [ʒiʁaʁ]; 25 December 1923 – 4 November 2015) was a French historian, literary critic, and philosopher of social science whose work belongs to the tradition of anthropological philosophy. Girard was the author of nearly thirty books, with his writings spanning many academic domains. Although the reception of his work is different in each of these areas, there is a growing body of secondary literature on his work and his influence on disciplines such as literary criticism, critical theory, anthropology, theology, psychology, mythology, sociology, economics, cultural studies, and philosophy. Girard's main contribution to philosophy, and in turn to other disciplines, was in the field of epistemological and ethical systems of desire. For Girard, religion and mythology were therefore necessary steps in human evolution to control the violence that arises from mimetic rivalry and unequal distribution of desirable things. Biography[edit]

Existentialism (wikipedia) Existentialism is a term applied to the work of certain late 19th- and 20th-century philosophers who, despite profound doctrinal differences,[1][2][3] shared the belief that philosophical thinking begins with the human subject—not merely the thinking subject, but the acting, feeling, living human individual.[4] In existentialism, the individual's starting point is characterized by what has been called "the existential attitude", or a sense of disorientation and confusion in the face of an apparently meaningless or absurd world.[5] Many existentialists have also regarded traditional systematic or academic philosophies, in both style and content, as too abstract and remote from concrete human experience.[6][7] Definitional issues and background[edit] There has never been general agreement on the definition of existentialism.

On the Fourfold Root of the Principle of Sufficient Reason Translated by Mme. KARL HILLEBRAND. THIS treatise on Elementary Philosophy, which first appeared in the year 1813, when it procured for me the degree of doctor, afterwards became the substructure for the whole of my system. It cannot, therefore, be allowed to remain out of print, as has been the case, without my knowledge, for the last four years.

Robert C. Solomon Robert C. Solomon (September 14, 1942 – January 2, 2007) was an American professor of philosophy at the University of Texas at Austin, where he taught for more than 30 years. Professor Solomon won many teaching honors, including the Standard Oil Outstanding Teaching Award in 1973; the University of Texas President's Associates Teaching Award (twice); a Fulbright Lecture Award; University Research and National Endowment for the Humanities Grants; and the Chad Oliver Plan II Teaching Award in 1998. Professor Solomon authored and edited more than 45 books, including The Passions, About Love, Ethics and Excellence, A Short History of Philosophy with Professor Kathleen Higgins, A Better Way to Think about Business, The Joy of Philosophy, Spirituality for the Skeptic, Not Passion's Slave, and In Defense of Sentimentality. He also wrote about business ethics in Above the Bottom Line, It’s Good Business, Ethics and Excellence, New World of Business and A Better Way to Think about Business.

Fyodor Dostoevsky Russian author Fyodor Mikhailovich Dostoevsky[a] (;[1] Russian: Фёдор Михайлович Достоевский[b], tr. Fyódor Mikháylovich Dostoyévskiy, IPA: [ˈfʲɵdər mʲɪˈxajləvʲɪdʑ dəstɐˈjɛfskʲɪj] ( Born in Moscow in 1821, Dostoevsky was introduced to literature at an early age through fairy tales and legends, and through books by Russian and foreign authors. His mother died in 1837 when he was 15, and around the same time, he left school to enter the Nikolayev Military Engineering Institute. After graduating, he worked as an engineer and briefly enjoyed a lavish lifestyle, translating books to earn extra money.

Charles Bell Sir Charles Bell KH FRS FRSE FRCSE MWS (12 November 1774 – 28 April 1842) was a Scottish surgeon, anatomist, physiologist, neurologist, artist, and philosophical theologian. He is noted for discovering the difference between sensory nerves and motor nerves in the spinal cord. He is also noted for describing Bell's palsy. Early life and education[edit] In 1798, Bell graduated from the University of Edinburgh and soon after was admitted to the Edinburgh College of Surgeons where he taught anatomy and operated at the Edinburgh Royal Infirmary. While developing his talents as a surgeon, Bell's interests forayed into a field combining anatomy and art.

Kathleen Higgins Kathleen Marie Higgins (born 1954) is an American Professor of Philosophy at the University of Texas at Austin where she has been teaching for over thirty years.[1] She specializes in aesthetics, philosophy of music, nineteenth and twentieth-century continental philosophy, and philosophy of emotion. Education and career[edit] Higgins earned her B.A. in music from the University of Missouri–Kansas City and completed her graduate work in philosophy at Yale University, receiving her M.A., M.Phil, and Ph.D.

Martin Heidegger Martin Heidegger (German: [ˈmaɐ̯tiːn ˈhaɪdɛɡɐ]; 26 September 1889 – 26 May 1976) was a German philosopher, widely seen as a seminal thinker in the Continental tradition, particularly within the fields of existential phenomenology and philosophical hermeneutics. From his beginnings as a Catholic academic, he developed a groundbreaking and widely influential philosophy. His relationship with Nazism has been a controversial and widely debated subject. For Heidegger, the things in lived experience always have more to them than what we can see; accordingly, the true nature of being is “withdrawal”. The interplay between the obscured reality of things and their appearance in what he calls the “clearing” is Heidegger's main theme.

Leibniz on the Problem of Evil 1. Various Versions of the Problem of Evil in Leibniz Before examining Leibniz's views on the problem of evil, it is necessary to do some stage-setting in order to locate just what sort of problem Leibniz thought evil presented. Consideration of any present-day introductory textbook of philosophy reveals that the problem of evil in contemporary philosophy is standardly regarded as an argument for atheism. The atheist contends that God and evil are incompatible, and given that evil clearly exists, God cannot exist. Some philosophers, conceding that the claimed incompatibility in the foregoing argument is too strong, contend, nevertheless, that even if the existence of God and the existence of evil should prove to be compatible, the existence (or duration, or amount, or pervasiveness) of evil provides us at the very least with compelling circumstantial evidence that God does not exist.

Pierre-Joseph Proudhon Proudhon, who was born in Besançon, was a printer who taught himself Latin in order to better print books in the language. His best-known assertion is that Property is Theft!, contained in his first major work, What is Property? Or, an Inquiry into the Principle of Right and Government (Qu'est-ce que la propriété? Recherche sur le principe du droit et du gouvernement), published in 1840.