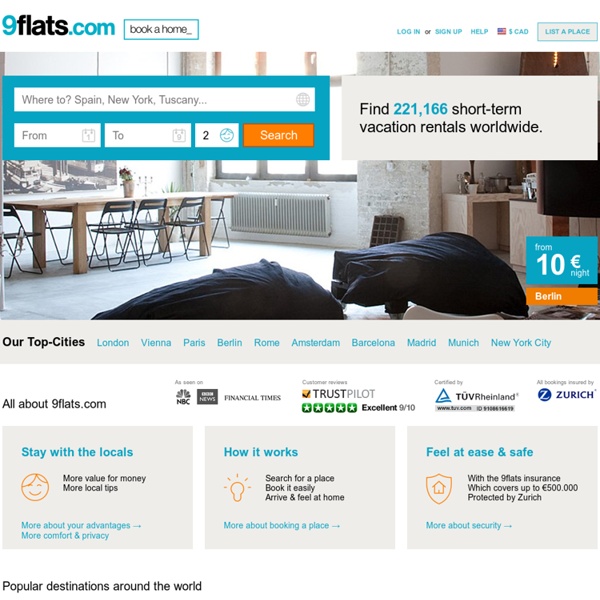 With 9flats.com, the alternative to hotels, you will find a variety of affordable vacation rentals offered by individuals around the world. Choose from over 100,000 locations, which include vacation apartments and rentals of all types. Whether you want a romantic apartment in Rome, a loft in the center of New York City or a chic guest house in Berlin, you'll find the perfect place to stay when you book through 9flats.com. Discover the world through the eyes of the local residents, while traveling in comfort and staying in prime locations that won´t break the bank. 9flats.com is transforming the world of travel by offering unique vacation rentals and apartments personally rented out by the owner. Have you always wanted to step inside the towering naves of London´s Westminster Abbey, walk along the Sienne on a warm Parisian night, or experience the unique nightlife of Berlin´s Kreuzberg district, all while traveling in style?

Dojo HTML5 Data-Attribute Support Dojo has long provided support for declaring widgets and specifying other information directly in HTML. This support makes it extremely quick and easy to get an application started. You can start instantiating widgets by adding attributes to HTML elements before even writing any code.

First Growth First Growth (French: Premier Cru) status is a classification of wines primarily from the Bordeaux region of France. History[edit] Bordeaux reds[edit] Crystal River - The most beautiful river on earth [Pics] Cano Cristales - Crystal River. River of five colors, as the locals call it, originates in the south of the mountain chain Macarena, Colombia, and flows eastward to its confluence with the Guayabero river. In the Cano Cristales found five colors: yellow, blue, green, black and red. All of them are waste product of many algae and, depending on time of year, color saturation, or weakened or strengthened. Share on Tumblr

Easy and beautiful documentation with Sphinx Introduction Sphinx is a tool allowing developers to write documentation in plain text for easy output generation in formats meeting varying needs. This becomes helpful when using a Version Control System to track changes. Plain text documentation is also useful for collaborators across different systems. Plain text is one of the most portable formats currently available. Although Sphinx is written in Python and was originally created for the Python language documentation, it is not necessarily language-centric and in some cases, not even programmer-specific.

Château d'Agassac, Haut-médoc, wine of The year 2003 is the chance dreamed of to fill your cellar with "small wines" which are anything but! Such as Château d'Agassac, a Cru bourgeois in full renaissance... More Plitvice Lakes National Park, Croatia The stunning Plitvice Lakes National Park lies in the Lika region of Croatia. The park is surrounded by the mountains Plješevica, Mala Kapela, and Medveđak, which are part of the Dinaric Alps. The 16 blue-green Plitvice Lakes, which are separated by natural dams of travertine, are situated on the Plitvice plateau. Waterfalls connect the lakes, and the tallest waterfall is Veliki Slap at 70 meters (230 feet) tall. The Plitvice lakes area boasts a large variety of interesting and colorful flora and fauna.