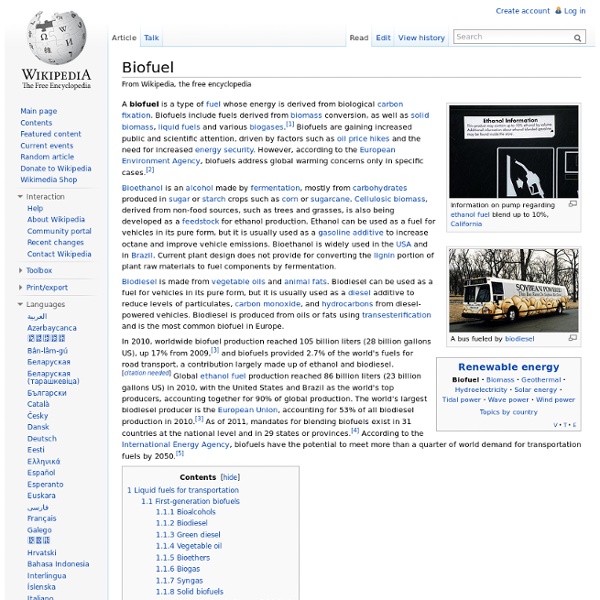 A biofuel is a fuel that contains energy from geologically recent carbon fixation. These fuels are produced from living organisms. Examples of this carbon fixation occur in plants and microalgae. These fuels are made by a biomass conversion (biomass refers to recently living organisms, most often referring to plants or plant-derived materials). This biomass can be converted to convenient energy containing substances in three different ways: thermal conversion, chemical conversion, and biochemical conversion. This biomass conversion can result in fuel in solid, liquid, or gas form. Bioethanol is an alcohol made by fermentation, mostly from carbohydrates produced in sugar or starch crops such as corn, sugarcane, or sweet sorghum. Biodiesel can be used as a fuel for vehicles in its pure form, but it is usually used as a diesel additive to reduce levels of particulates, carbon monoxide, and hydrocarbons from diesel-powered vehicles. Liquid fuels for transportation[edit] Ethanol[edit] Related:  GENERALITES • Unsorted R&D

Natural Gas Natural gas is a fossil fuel formed when layers of buried plants, gases, and animals are exposed to intense heat and pressure over thousands of years. The energy that the plants originally obtained from the sun is stored in the form of chemical bonds in natural gas. Natural gas is a nonrenewable resource because it cannot be replenished on a human time frame.[1] Natural gas is a hydrocarbon gas mixture consisting primarily of methane, but commonly includes varying amounts of other higher alkanes and even a lesser percentage of carbon dioxide, nitrogen, and hydrogen sulfide.[2] Natural gas is an energy source often used for heating, cooking, and electricity generation. Natural gas is found in deep underground rock formations or associated with other hydrocarbon reservoirs in coal beds and as methane clathrates. Before natural gas can be used as a fuel, it must be processed to remove impurities, including water, to meet the specifications of marketable natural gas. Sources[edit]

UK joins 'super-microscope' project 10 March 2014Last updated at 21:00 ET By Pallab Ghosh Science correspondent, BBC News Super-microscope: The UK is to help build the European Spallation Source - a new facility in Sweden The UK government has allocated £290m for new international science projects. The Science Minister David Willetts will earmark £165m to join a project to build a "super-microscope" in Sweden He will also pledge up to £100m to build the largest telescope ever built in South Africa and Australia. Critics warn that spending on projects that bring economic benefits to the UK must not be at the expense of basic research. Continue reading the main story “Start Quote Universities are feeling quite squeezed in their ability to provide good facilities on site and keep their facilities going” End QuoteDr Sarah MainCampaign for Science and Engineering (Case) Mr Willetts has said that he wants the UK to be at the forefront of some of the world's leading scientific projects. Deep cuts Continue reading the main story

How Biomass Energy Works Biomass is a combination of organic and biological materials usually composed of both plants and animals. It is composed of stored energy derived from the sun, and can release a new source of energy when physical and chemical processes are applied to it. Most biomasses materials come from wood, trees, grasses, agricultural crops, garbage and other urban wastes. • The most well known source of biomass energy is by burning of wood. • There is another simple way of how biomass energy works. • Agricultural crops like corn and sugarcane undergo the fermentation process to produce fuel like ethanol, which is used for trucks, cars and other means of transport. • Vegetable oils and animal fats can be converted to produce biodiesel which is also used in vehicles and other kinds of transportation. • Biomass energy also works by anaerobic digestion which involves the process of using microorganisms to break down biodegradable wastes and convert them into fuel.

Vegetable oil fuel Waste vegetable oil which has been filtered. Vegetable oil is an alternative fuel for Diesel engines and for heating oil burners. For engines designed to burn diesel fuel, the viscosity of vegetable oil must be lowered to allow for proper atomization of the fuel, otherwise incomplete combustion and carbon build up will ultimately damage the engine. History[edit] Rudolf Diesel Rudolf Diesel was the father of the engine which bears his name. Periodic petroleum shortages spurred research into vegetable oil as a diesel substitute during the 1930s and 1940s, and again in the 1970s and early 1980s when straight vegetable oil enjoyed its highest level of scientific interest. Academic research into straight vegetable oil fell off sharply in the 1980s with falling petroleum prices and greater interest in biodiesel as an option that did not require extensive vehicle modification. Application and usability[edit] Modified fuel systems[edit] Unmodified indirect injection engines[edit] Home heating[edit]

Hydroelectricity Hydroelectricity is the term referring to electricity generated by hydropower; the production of electrical power through the use of the gravitational force of falling or flowing water. It is the most widely used form of renewable energy, accounting for 16 percent of global electricity generation – 3,427 terawatt-hours of electricity production in 2010,[1] and is expected to increase about 3.1% each year for the next 25 years. Hydropower is produced in 150 countries, with the Asia-Pacific region generating 32 percent of global hydropower in 2010. China is the largest hydroelectricity producer, with 721 terawatt-hours of production in 2010, representing around 17 percent of domestic electricity use. The cost of hydroelectricity is relatively low, making it a competitive source of renewable electricity. History Museum Hydroelectric power plant ″Under the Town″ in Serbia, built in 1900.[3][4] Hydropower has been used since ancient times to grind flour and perform other tasks. Pumped-storage

Defence Science and Technology Organisation To achieve its mission, DSTO provides scientific and technical support to current defence operations, investigates future technologies for defence and national security applications, advises on the purchase and smart use of defence equipment, develops new defence capabilities, and enhances existing systems by improving performance and safety and reducing the cost of owning defence assets. The Chief Defence Scientist leads the DSTO. The position is supported by an independent Advisory Board with representatives from defence, industry, academia and the science community. DSTO has an annual budget of approximately $440 million and employs over 2500 staff, predominantly scientists, engineers, IT specialists and technicians. In February 2012 DSTO was given the whole-of-government responsibility to coordinate research and development for Australia's national security. DSTO manages the Capability and Technology Demonstrator (CTD) program on behalf of Defence. History[edit] Sites[edit] Notes[edit]

Advantages and Disadvantages of Biomass Speaking of resources, the world changes pace everyday. First there was evolution which took us from wood to steel to iron (and more), then development happened and took us to the stage that we are in now. Now we see that there are distinct shifts in policies which have taken us back to our roots and have been able to reacquaint us with the natural resources that we once used. One of those resources was biomass. This article will try to give you an in-depth review on the advantages and disadvantages of biomass energy. What is Biomass Biomass is biological matter that is acquired from plants and animals and has large amounts of carbon as well as traces of oxygen, nitrogen, hydrogen, alkaline earth and heavy metals in it. The main sources that are used to formulate biomass are wood, alcohol fuels and solid waste. Advantages of Biomass Uses Renewable Resources: Biomass is derived from sources like plants and animals, in short, sources which are replaceable. Disadvantages of Biomass

Papermaking Paper-making is the process of making paper, a substance which is used universally today for writing and packaging. In paper-making, a dilute suspension of fibres in water is drained through a screen, so that a mat of randomly interwoven fibres is laid down. Water is removed from this mat of fibres by pressing and drying to make paper. History[edit] Hemp wrapping paper, China, circa 100 BCE. In the 8th century, paper spread to the Islamic world, where the rudimentary and laborious process of paper-making was refined and machinery was designed for bulk manufacturing of paper. Modern paper-making began in the early 19th century in Europe with the development of Fourdrinier machine, which produces a continuous roll of paper rather than individual sheets. Manual paper-making[edit] The method of manual paper-making changed very little over time, despite advances in technologies. Separating the useful fibre from the rest of raw materials. The wooden frame is called a "deckle". Folio[edit]