Jobster: Helping job seekers find jobs and get noticed by the hiring team 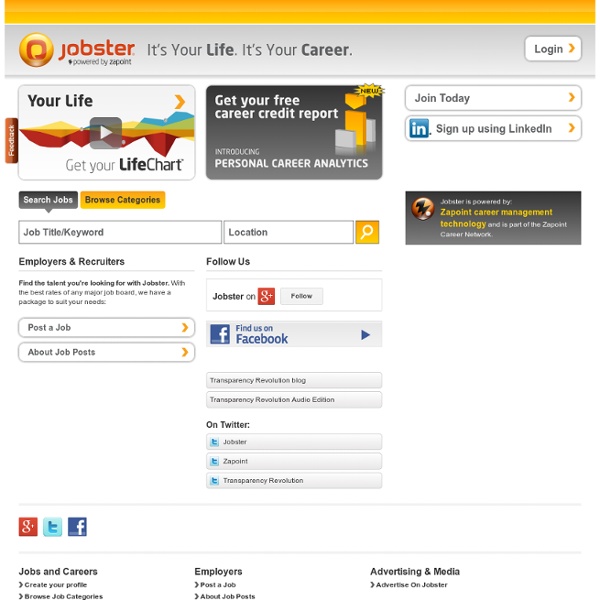 To Work Abroad Successfully, Put Down Roots The Benefits of Becoming a Local By Tim Leffel When most people start thinking about working abroad, they generally fall into one of two camps. Those in the first camp plan on securing a solid job before they go. These people intend to spend anywhere from a summer to several years in a foreign place, with a relatively set idea of how they will spend their workdays. Cover Letter Errors Like job seekers, bloggers often reach out and network with each other. Just this week, The Pongo Blog received an inquiry from a potential guest blogger. Her message started with a nice compliment ("Your blog is so helpful!") and referred to one of our recent posts. So far, so good.

Tools to Help You Grow Your Practice You don’t need compliance approval to LISTEN! Learn how to use Google Reader. Simply enter the code “learn” (without quotes) in the box below. 15 Sales Rules To Live (and Die) By In January 1999, I wrote a memo to a new wholesaling organization that I was starting. It was designed to set the baseline for how we would carry ourselves and face off against customers. Government Jobs About 2 million people are employed in a government job, making the federal government America's largest employer. Only 10% of these workers are located in Washington, D.C., the rest work in federal government jobs throughout the United States and overseas. Government employees are hired in just about every career field and in a wide variety of occupations.

12 Practical Business Lessons From Social Psychology The Foot in the Door PhenomenonIt’s been said many times that business is all about people. That being the case, perhaps we should stop reading management books for advice and start looking at social psychology. Very simply, social psychologists study how people interact with others – their families, friends, and yes, business partners. Smart marketers and executives have been using the findings of this growing field for decades to close sales, hold effective meetings and get their way in negotiations. But rather than putting you through an academic psychology lesson, we condensed the most useful concepts into one article. Foot In Door

Retire to Australia for the Comforts of Home If you retire to Australia, you’ll find yourself in a country with an economy and lifestyle comparable to that of the United States, making the transition to foreign soil that much easier. However, Australia has a lot to offer in several areas regarding quality of life that even the United States has trouble maintaining in the most desirable areas. The land ‘Down Under’ is a modern, rich nation that is full of beauty with a number of its own natural resources, and a variety of climates tog choose from when you are picking out your home. Using a Digital Signature to Spruce Up Your Cover Letters Home > Cover Letters > Using a Digital Signature to Spruce Up Your Cover Letters Most job applications are submitted through the Internet today, either through an online application system or by e-mailing cover letters and resumes as attachments. Sending electronic cover letters is very convenient, but it precludes the applicant’s ability to sign the letter. Unless you want to print out, sign, scan, and then e-mail every single cover letter you write, it’s easier to just send them without a signature. One way you can make your cover letters stand out is to insert a digital image of your signature. You can create this for yourself at home by neatly signing a piece of paper, scanning it, and cropping the image down to just the size of the signature.

Retire In Belize - A Subtropical Paradise Why retire in Belize? Belize is a country many may not have heard of,though it offers plenty of opportunity for relaxing in the sun and retiring in pure bliss. The country was formally called British Honduras and is located on the Eastern coast of Central America. For individuals wishing to retire in the Caribbean, Belize retirement may be one of the best choices today. Mexico is just to the north and Guatemala is to the south. The Monster Blog « Seasonal Jobs and the Monthly Unemployment Report | Main | The Monster 5 for Friday--Careers Edition--October 8 » October 07, 2010 Hunter S. Thompson's Cover Letter Journalist and bon viveur Hunter S.