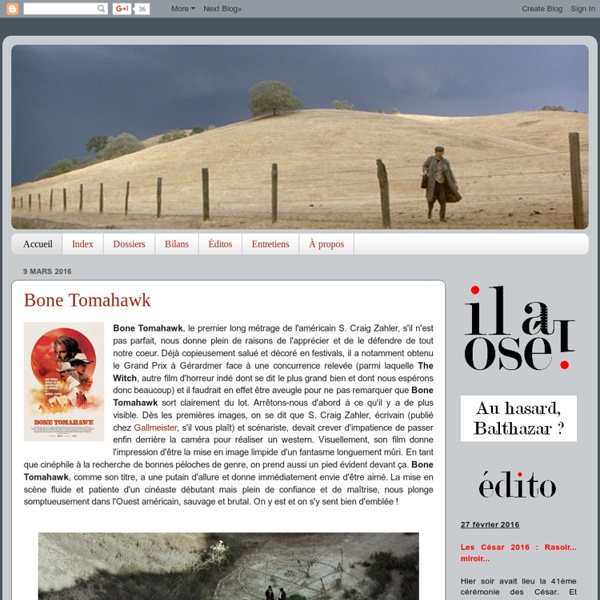 Dérives autour du cinéma Flicker: Your Brain on Movies by Jeffrey Zacks – how Hollywood has changed your mind These days, human beings are nowhere more at home than in front of a screen. I refer you to Gogglebox, the Channel 4 series in which families and friends are filmed as they watch TV. Warm and secure, they exhibit all the behaviours you would expect of a species in its natural habitat: feeding, laughing, crying and fighting. It may be light entertainment, but I bet a lot of psychologists and anthropologists love it. A few weeks ago we saw viewers’ reactions to a scene from Casino Royale. None of this would come as a surprise to Jeff Zacks. What about the emotional impact of moving images? There is a lot of neuroscience and even more experimental psychology in Flicker, but thankfully Zacks is an academic who remembers how to communicate with ordinary people. Second, and perhaps more surprisingly, Zacks argues that there need be no further controversy about whether violence on TV, in games, or on film makes those exposed to it more aggressive: it does.

Retelly - A video magazine 6 Stupid Characters That Hollywood Now Puts In Every Movie Writing realistic and compelling characters is, like, really hard to do -- and it only becomes more difficult when you're trying to write realistic characters in a world of rampaging mutant scientists and dinosaur skirmishes. Since solid (even marginal) character development has lately taken a backseat to finding excuses for the heroes to get tossed from one action setpiece to the next, we've started to see the same inexplicable character traits spring up in our favorite blockbusters over and over again, like big dumb weeds. Don't believe me? Then how come ... #6. Paramount Pictures There's a scene in the record-breaking Jurassic World in which the two kids escape their gigantic clowny hamster ball in order to be thrillingly chased by a genetically-bastardized monster cartoon. Universal Studios"LOL! After narrowly escaping a nightmarish death by mere inches, the brothers crawl out of the water while sharing a hearty chuckle, like a couple of rough-and-tumble Indiana Joneses. #5. #4.

thought maybe Hollywood has ruined method acting | Movie News | SBS Movies Of all the stories surfacing about the new DC Comics film Suicide Squad—from the dismal reviews to the box-office reports—the most disconcerting are the ones that detail how Jared Leto got into his role as the Joker. Leto was reportedly so committed to the part that he gifted the cast and crew with a litany of horrible items: used condoms, a dead pig, a live rat. To get into the character’s twisted mindset, he also watched footage of brutal crimes online. “The Joker is incredibly comfortable with acts of violence,” he told Rolling Stone. Watching Leto tell one disturbing tale after another makes one thing abundantly clear: Method acting is over. Leto was, of course, following Heath Ledger’s towering, Oscar-winning performance as the Joker in 2007’s The Dark Knight, so he had to differentiate himself not just stylistically and on screen, but also in the press. So it isn’t surprising that Leto and his castmates used shocking stories to help build a mythology around the movie.

Should we be surprised by John Wayne's racist and homophobic views? | Caspar Salmon | Film Dusting itself off after the excitement of Liam Neeson’s racist meltdown, the film world has settled on its next talking point, an old interview of John Wayne, recently dug up, in which the actor is revealed to have been racist and homophobic. ¡Escándalo! In the interview with Playboy magazine from 1971, the actor born Marion Morrison states, among other things “I believe in white supremacy” and calls Midnight Cowboy “a story about two fags”. Shocking stuff from an actor famous for his contribution to the notoriously liberal cowboys and indians genre, who supported Richard Nixon, and directed The Green Berets in support of the US Army during the Vietnam war. In one sense, revisiting Wayne’s views is important: we should be mindful to revise and decolonise the film canon, and it’s essential to reassess cinema’s heroes in the light of our shifting politics. John Wayne is wholly synonymous with movie rightwingery, for his films and his extracurricular activities.

Film semiotics Film semiotics is the semiotics of film; the study of signs as they pertain to film on a variety of levels. Early semioticians of film[edit] Ricciotto Canudo – Italian writer working in the 1920’s, identified “language-like character of cinema”.[1] Louis Delluc – French writer, working in the 1920’s, wrote of the ability of film to transcend national language.[1] Vachel Lindsay – referred to film as “hieroglyphic language” [1] Bela Balazs – Hungarian film theorist who wrote about language-like nature of film from the 1920’s to the 1940’s.[1] Russian Formalism (1910s to the 1930s)[edit] Yury Tynyanov was a Russian writer and literary critic. Eichenbaum and Tynyanov had different approaches to interpreting the signs of film. Structuralism and Post-structuralism (1950s – current)[edit] The film-language concept was explored more deeply in the 1960’s when post-structuralist thinkers started to criticize structuralism. Umberto Eco – Italian novelist and semiotician Important and Notable Works[edit]