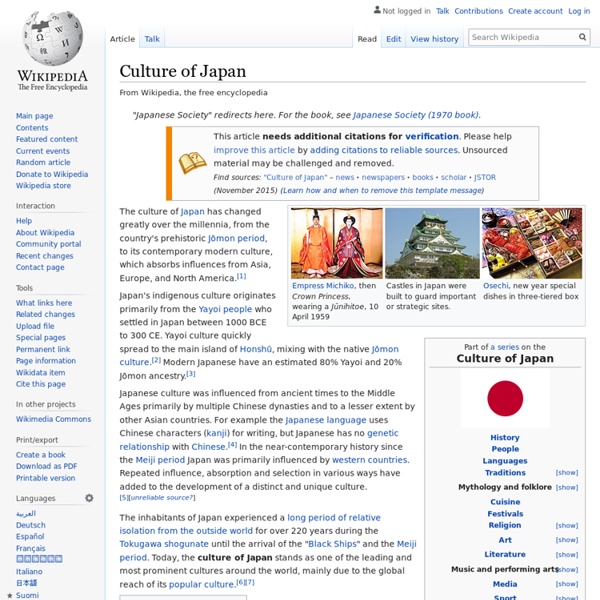 Castles in Japan were built to guard important or strategic sites. Osechi, new year special dishes in three-tiered box The culture of Japan has changed greatly over the millennia, from the country's prehistoric Jōmon period, to its contemporary modern culture, which absorbs influences from Asia, Europe, and North America.[1] Japan's indigenous culture originates primarily from the Yayoi people who settled in Japan between 1000 BCE to 300 CE. Yayoi culture quickly spread to the main island of Honshū, mixing with the native Jōmon culture.[2] Modern Japanese have an estimated 80% Yayoi and 20% Jōmon ancestry.[3] The inhabitants of Japan experienced a long period of relative isolation from the outside world for over 220 years during the Tokugawa shogunate until the arrival of the "Black Ships" and the Meiji period. Language[edit] Japanese is written with a combination of three scripts: hiragana and katakana were derived from the Chinese man'yōgana of the 5th century.[8]. Religion[edit]

J-pop Form and definition[edit] In 1990, the Japanese subsidiary of Tower Records defined J-pop as all Japanese music belonging to the Recording Industry Association of Japan except Japanese independent music (which they term "J-indie"); their stores began to use additional classifications, such as J-club, J-punk, J-hip-hop, J-reggae, J-anime, and Visual kei by 2008, after independent musicians started to release works via major labels.[7] Ito Music City, a Japanese record store, adopted expanded classifications including Group Sounds, idol of the 1970s–1980s, enka, folk and established musicians of the 1970s–1980s, in addition to the main J-pop genres.[7] Hide of Greeeen openly described their music genre as J-pop. He said, "I also love rock, hip hop and breakbeats, but my field is consistently J-pop. For example, hip hop musicians learn 'the culture of hip hop' when they begin their career. We are not like those musicians and we love the music as sounds very much. History[edit]

10 Search Engines to Explore the Invisible Web Not everything on the web will show up in a list of search results on Google or Bing; there are lots of places that their web crawlers cannot access. To explore the invisible web, you need to use specialist search engines. Here are our top 12 services to perform a deep internet search. Simply, it’s a catch-all term for online content that will not appear in search results or web directories. There are no official data available, but most experts agree that the invisible web is several times larger than the visible web. The content on the invisible web can be roughly divided into the deep web and the dark web. The Deep Web The deep web made up of content that typically needs some form of accreditation to access. If you have the correct details, you can access the content through a regular web browser. The Dark Web The dark web is a sub-section of the deep web. The Best Dark Web Browser for Your Device The Best Dark Web Browser for Your Device Want to access the dark web? 1. 2. 3. 4. 5. 6. 7.

World's funniest joke The "world's funniest joke" is a term used by Richard Wiseman of the University of Hertfordshire in 2002 to summarize one of the results of his research. For his experiment, named LaughLab, he created a website where people could rate and submit jokes.[1] Purposes of the research included discovering the joke that had the widest appeal and understanding among different cultures, demographics and countries.[citation needed] The History Channel eventually hosted a special on the subject.[citation needed] The jokes The winning joke, which was later found to be based on a 1951 Goon Show sketch by Spike Milligan,[2] was submitted by Gurpal Gosal of Manchester: Two hunters are out in the woods when one of them collapses. References

Bobby Fischer In 1970, "Fischer dominated his contemporaries"[6] by winning the 1970 Interzonal Tournament by a record 3½-point margin and winning 20 consecutive games, including two unprecedented 6–0 sweeps in the Candidates Matches.[7] In July 1971, he became the first official World Chess Federation (FIDE) number-one-ranked player, spending 54 total months at number one. In 1972, he captured the World Chess Championship from Boris Spassky of the USSR in a match, held in Reykjavík, Iceland, publicized as a Cold War confrontation which attracted more worldwide interest than any chess championship before or since.[8] In the 1990s, Fischer patented a modified chess timing system (which added a time increment after each move; now a standard practice in top tournament and match play) and created a new variant of chess called Fischerandom (Chess960).[13] Early years[edit] After graduating from college in her teens, Regina traveled to Germany to visit her brother. Paul Nemenyi as Fischer's father[edit]

Immortal Game Game animation General description[edit] Checkmate of the Immortal Game Adolf Anderssen was one of the strongest players of his time, and many consider him to have been the world's strongest player after his victory in the London 1851 chess tournament. Played between the two great players at the Simpson's-in-the-Strand Divan in London, the Immortal Game was an informal one, played during a break in a formal tournament. This game is acclaimed as an excellent demonstration of the style of chess play in the 19th century, where rapid development and attack were considered the most effective way to win, where many gambits and counter-gambits were offered (and not accepting them would be considered slightly ungentlemanly), and where material was often held in contempt. Some published versions of the game have errors, as described in the annotations. Annotated game[edit] White: Adolf Anderssen[3] Black: Lionel Kieseritzky Opening: Bishop's Gambit (ECO C33) 1. e4 e5 2. f4 2... exf4 3. 4. 5. 6... 7...

How to Memorize: 27 steps Edit Article Memory HelpAuditory learnersVisual learnersTactile/kinesthetic learnerReading method Edited by Nicole Willson, James Quirk, Flickety, January99 and 135 others Tired of taking tests and not being able to remember what you just read last night? You know you know it, it's just not coming to you in the heat of the moment. Ad Steps Method 1 of 4: Auditory learners 1Listen to this. 8Move around. Method 2 of 4: Visual learners 1Take a long hard look. 9Move around. Method 3 of 4: Tactile/kinesthetic learner 1If you like to touch things to obtain information, you are very likely the hands-on kind. 5The tips for visual and auditory learnings should help you too, especially learning by association and repeating concepts aloud as you pace around the room. Method 4 of 4: Reading method 1If you're a reader type, then you memorize best what you can read. 6Keep reading until you memorize it by heart. Tips Read and write. Article Info Featured Article In other languages:

Create a Facebook Fan Page for your Blog Facebook is a great Social Networking Site to promote your blog or brand. Most of the major brands do have a Facebook Fan Page. Here are some examples of Facebook Fan pages – Coca Cola FB Fan Page , Mashable FB Fan Page. Are you impressed and want to create one for your blog? 1.Go to the Create Fan Page Link on Facebook and select Brand or Product Choose Website from the drop down list and provide the Page name in the next box. 2.On the Next Page, Upload an Image for your Fan Page 3.Once you have added the image, you can edit the fan page information by clicking on the “Edit Page” link as in the image below Edit the fan page information and Save the Changes. 4. Using the RSS Graffiti Application a. b. Now authorize RSS Graffiti(second authorization for your fan page) to access your Fan Page Once authorized, Click on the Add Feed Button, and enter your Feed Url. If your blog is then your Feed Url will be Getting More Fans

How to Learn Speed Reading: 17 steps Steps Part 1 Learning to Speed Read <img alt="Image titled Learn Speed Reading Step 1" src=" width="728" height="546" class="whcdn" onload="WH.performance.clearMarks('image1_rendered'); WH.performance.mark('image1_rendered');">1Stop talking to yourself. Almost every reader "subvocalizes," or moves their throat as they imagine speaking the words.[1] This may help the reader remember concepts, but it's also a major barrier to speed.[2][3] Here are a few ways to keep this habit to a minimum: Chew gum or hum while you read. This occupies muscles used to subvocalize.If you move your lips as you read, hold a finger against them. Part 2 Skimming Text Part 3 Timing Your Reading Speed Community Q&A Add New Question Can I train my brain to read more than 17,000 wpm? Ask a Question Answer Questions Make a stranger's day. Tips Take a break every 30–60 minutes. Warnings