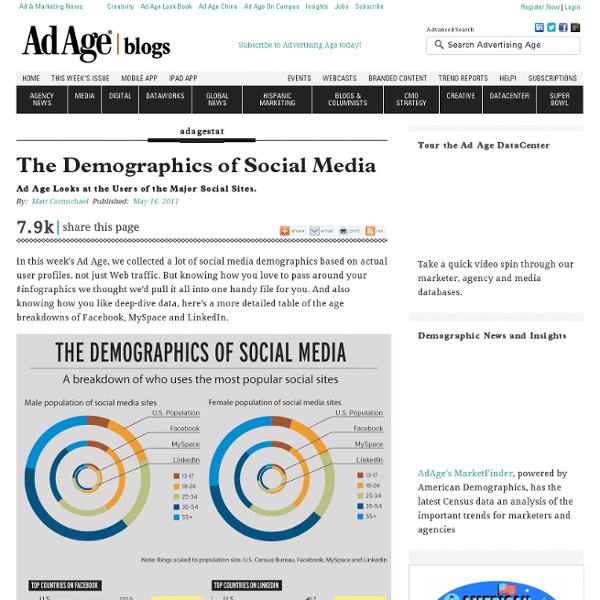 8 ways to protect your FB privacy By Mark W. Smith, Detroit Free Press Posted 5/16/2011 11:08:01 PM | As Facebook becomes the window to the Web for its more than 500 million users, the security of the social network has never been a hotter topic. Infographic: A Look At The Size And Shape Of The Geosocial Universe In 2011 Thanks to Jesse Thomas of interactive design agency JESS3, we now have an updated look at the structure of the geosocial universe as it exists in anno domini 2011. It wasn’t so long ago that the International Astronomical Union booted Pluto out of the solar system or that MySpace was overtaking Yahoo! and Google as the most-visited site in the U.S. Well, a few rotations around the sun later, and the overall shape of the geosocial universe has changed dramatically. New stars have been born and others have been scattered out across the cold recesses of Internet space.

Facebook the king of shared content: report Just how big a part of the link economy is content sharing? According to a study which looked at behavior across some 300m who share content monthly using the ShareThis button, sharing now accounts for approximately 10% of all traffic on the internet. And when it comes to the source of this sharing, one site stands out above all others: Facebook. ShareThis' data shows that the popular social network produces 38% of all sharing traffic, slightly more than bookmarking services and blogs, which account for 34% of sharing traffic. Facebook handily beats out both Twitter and email, which each generate 17% of sharing referrals. For the first time ever, Facebook now accounts for more than half of all content shared, clicks and traffic notwithstanding.

Instagram Traffic Up 38 Percent In July, Tumblr Surpasses MySpace [ComScore] Interest in Instagram rose significantly in July, enough to make it the top gaining web property in comScore’s monthly tracking of traffic to U.S. websites. ComScore’s July 2012 Top 50 shows a 38 percent traffic gain for Instagram between June and July, with unique visitors rising from 16.5 million to 22.7 million. Overall, that puts Instagram just outside the Top 50 at No. 56. The numbers appear to coincide with Instagram’s self-reported growth. In late July, Instagram announced that its community had surpassed 80 million users and nearly four billion photos shared.

Coke vs Pepsi [infographic] The cola wars have been fought hotly between Pepsi and Coca Cola. Both giants have been at each other’s throats for decades, for a share of the huge market. Checkout the infographic made by Business Insurance Quotes to see how the cola war has progressed. Via Visually , SISFTI The 5 Rules of Social Media Etiquette Just today an acquaintance told me her mother-in-law wrote a defamatory statement on Facebook about her. Although she let it roll off her shoulders, I was surprised that someone would do that to a family member. A leading family law firm Bross Bennett warns how damaging digital communications can be if used incorrectly, with detrimental affects going further than recipients and online communities and right into the courts of law. Just this week, a US court slashed maintenance payments to an ex-wife because of her blog posts.

How To Calculate the ROI of Enterprise 2.0 With enterprise social software platforms still in their infancy, ROI measurements are just now becoming possible with early adopter communities. While I don’t expect that we will need to continuously re-justify these tools in the workplace, I do believe that measurements are going to be required to help bring about a more successful transition and wider adoption. At the Enterprise 2.0 conference last month, I spoke on a panel about measuring the ROI of E2.0 from an HR perspective. After listening to questions from the audience, I realized that community mangers are looking for more detailed guide of how to measure the benefits of E2.0 software.

Facebook Page iFrame Plugin for Wordpress Create Facebook landing pages – no developers required Want to create attractive Facebook iFrame landing pages easily using a simple WYSIWYG editor? With the Facebook landing page iFrame plugin for WordPress you can; use the easy and intuitive WordPress interface to show your content in the very best manner without the need for any developer knowledge. Usage Statistics and Market Share of MySpace for Websites, October 2012 Technologies > Social Widgets > MySpace Request an extensive MySpace market report. Learn more Internet users per time zone (chart) Posted in Tech blog on May 19th, 2011 by Pingdom We know that there are approximately two billion Internet users in the world, but how are they distributed? More specifically, how are they spread over the world’s time zones? The world population isn’t spread evenly, and neither is the Internet population.

Clash of the titans: Email v social media 25 November 2011Last updated at 05:05 By Fiona Graham Technology of business reporter, BBC News Vital signs: Is your email inbox hanging on by a thread, or are reports of its imminent demise greatly exaggerated? The headlines were unequivocal - Facebook founder Mark Zuckerberg had announced that email is dead. The truth however was a little more prosaic.