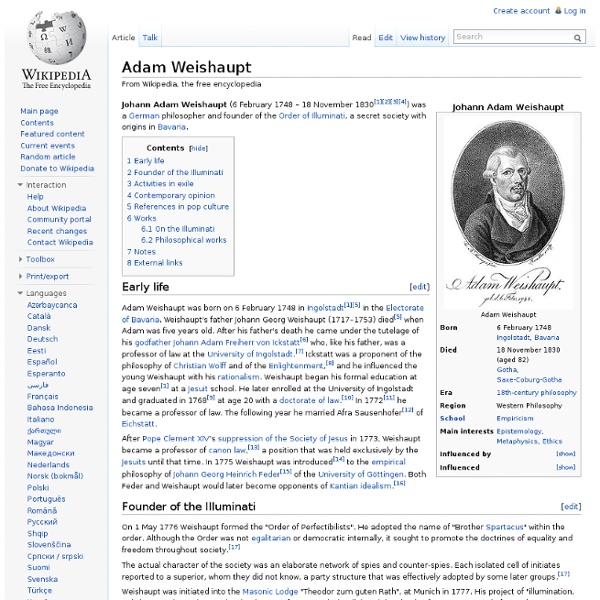 Johann Adam Weishaupt (6 February 1748 – 18 November 1830[1][2][3][4]) was a German philosopher and founder of the secret society, the Order of Illuminati. Early life[edit] After Pope Clement XIV’s suppression of the Society of Jesus in 1773, Weishaupt became a professor of canon law,[13] a position that was held exclusively by the Jesuits until that time. In 1775 Weishaupt was introduced[14] to the empirical philosophy of Johann Georg Heinrich Feder[15] of the University of Göttingen. Both Feder and Weishaupt would later become opponents of Kantian idealism.[16] Founder of the Illuminati[edit] On May day 1776 Johann Adam Weishaupt founded the "Illuminati" in the Electorate of Bavaria. The actual character of the society was an elaborate network of spies and counter-spies. Weishaupt was initiated into the Masonic Lodge "Theodor zum guten Rath", at Munich in 1777. Weishaupt's radical rationalism and vocabulary was not likely to succeed. Activities in exile[edit] Works[edit] Notes[edit]

Jean-Paul Sartre His work has also influenced sociology, critical theory, post-colonial theory, and literary studies, and continues to influence these disciplines. Sartre has also been noted for his open relationship with the prominent feminist theorist Simone de Beauvoir. He was awarded the 1964 Nobel Prize in Literature but refused it, saying that he always declined official honors and that "a writer should not allow himself to be turned into an institution".[2] Biography[edit] Early life[edit] Jean-Paul Sartre was born in Paris as the only child of Jean-Baptiste Sartre, an officer of the French Navy, and Anne-Marie Schweitzer.[3] His mother was of Alsatian origin and the first cousin of Nobel Prize laureate Albert Schweitzer. In 1929 at the École Normale, he met Simone de Beauvoir, who studied at the Sorbonne and later went on to become a noted philosopher, writer, and feminist. World War II[edit] French journalists visit General George C. Cold War politics and anticolonialism[edit]

Jacques Derrida Jacques Derrida (/ʒɑːk ˈdɛrɨdə/; French: [ʒak dɛʁida]; born Jackie Élie Derrida;[1] July 15, 1930 – October 9, 2004) was a French philosopher, born in French Algeria. Derrida is best known for developing a form of semiotic analysis known as deconstruction. He is one of the major figures associated with post-structuralism and postmodern philosophy.[3][4][5] During his career Derrida published more than 40 books, together with hundreds of essays and public presentations. He had a significant influence upon the humanities and social sciences, including—in addition to philosophy and literature—law[6][7][8] anthropology,[9] historiography,[10] linguistics,[11] sociolinguistics,[12] psychoanalysis, political theory, feminism, and queer studies. Particularly in his later writings, he frequently addressed ethical and political themes present in his work. Life[edit] Derrida was the third of five children. Derrida traveled widely and held a series of visiting and permanent positions.

Martin Heidegger Martin Heidegger (German: [ˈmaɐ̯tiːn ˈhaɪdɛɡɐ]; 26 September 1889 – 26 May 1976) was a German philosopher, widely seen as a seminal thinker in the Continental tradition, particularly within the fields of existential phenomenology and philosophical hermeneutics. From his beginnings as a Catholic academic, he developed a groundbreaking and widely influential philosophy. His relationship with Nazism has been a controversial and widely debated subject. For Heidegger, the things in lived experience always have more to them than what we can see; accordingly, the true nature of being is “withdrawal”. The interplay between the obscured reality of things and their appearance in what he calls the “clearing” is Heidegger's main theme. It has been suggested[by whom?] Biography[edit] Early years[edit] The Mesnerhaus in Meßkirch, where Heidegger grew up Marburg[edit] Freiburg[edit] In 1927, Heidegger published his main work Sein und Zeit (Being and Time). According to historian Richard J. Post-war[edit]

Friedrich Nietzsche Friedrich Wilhelm Nietzsche (/ˈniːtʃə/[1] or /ˈniːtʃi/;[2] German: [ˈfʁiːdʁɪç ˈvɪlhɛlm ˈniːt͡sʃə]; 15 October 1844 – 25 August 1900) was a German philosopher, cultural critic, poet, composer and Latin and Greek scholar. He wrote several critical texts on religion, morality, contemporary culture, philosophy and science, displaying a fondness for metaphor[3] and irony. Nietzsche's key ideas include perspectivism, the will to power, the death of God, the Übermensch and eternal recurrence. Nietzsche began his career as a classical philologist—a scholar of Greek and Roman textual criticism—before turning to philosophy. As his caretaker, his sister assumed the roles of curator and editor of Nietzsche's manuscripts. Life[edit] Youth (1844–69)[edit] Born on 15 October 1844, Nietzsche grew up in the small town of Röcken, near Leipzig, in the Prussian Province of Saxony. While at Pforta, Nietzsche had a penchant for pursuing subjects that were considered unbecoming. Nietzsche in his younger days