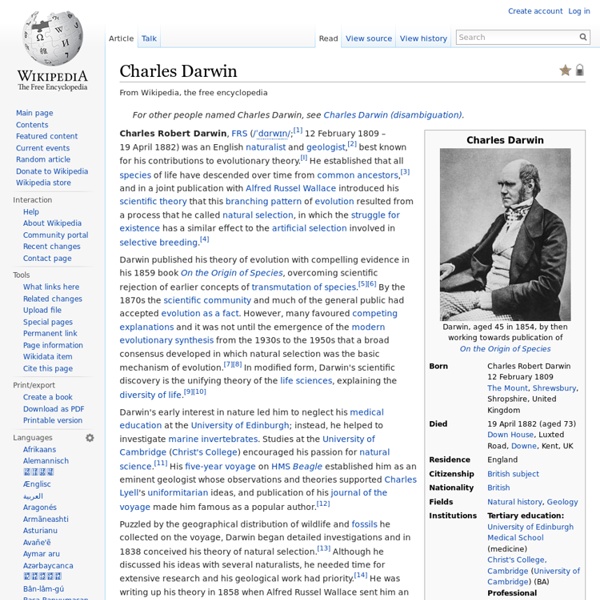 Charles Robert Darwin, FRS (/ˈdɑrwɪn/;[1] 12 February 1809 – 19 April 1882) was an English naturalist and geologist,[2] best known for his contributions to evolutionary theory.[I] He established that all species of life have descended over time from common ancestors,[3] and in a joint publication with Alfred Russel Wallace introduced his scientific theory that this branching pattern of evolution resulted from a process that he called natural selection, in which the struggle for existence has a similar effect to the artificial selection involved in selective breeding.[4] Darwin published his theory of evolution with compelling evidence in his 1859 book On the Origin of Species, overcoming scientific rejection of earlier concepts of transmutation of species.[5][6] By the 1870s the scientific community and much of the general public had accepted evolution as a fact. Biography Early life and education Painting of seven-year-old Charles Darwin in 1816. Voyage of the Beagle Death and funeral Works

Charles Darwin Charles Darwin, widely considered as one of the greatest and most revolutionizing scientists in history, was the British naturalist who formulated the theory of evolution. Pre-Darwin, it was thought that each species of life on earth came individually and that none had ever changed its form. He confuted this notion and demonstrated from his research that evolution is the law of nature and all living things on earth have descended from common ancestors who lived millions of years ago. He proved that animals and plants have evolved in an orderly manner and keep on evolving even today. Advertisements Early Life:

Samuel Beckett Samuel Barclay Beckett (/ˈbɛkɪt/; 13 April 1906 – 22 December 1989) was an Irish avant-garde novelist, playwright, theatre director, and poet, who lived in Paris for most of his adult life and wrote in both English and French. His work offers a bleak, tragicomic outlook on human nature, often coupled with black comedy and gallows humour. Beckett is widely regarded as among the most influential writers of the 20th century.[2] He is considered one of the last modernists. As an inspiration to many later writers, he is also sometimes considered one of the first postmodernists. He is one of the key writers in what Martin Esslin called the "Theatre of the Absurd". His work became increasingly minimalist in his later career.

Galileo Galilei Galileo Galilei (Italian pronunciation: [ɡaliˈlɛːo ɡaliˈlɛi]; 15 February 1564[3] – 8 January 1642), often known mononymously as Galileo, was an Italian physicist, mathematician, engineer, astronomer, and philosopher who played a major role in the scientific revolution during the Renaissance. His achievements include improvements to the telescope and consequent astronomical observations and support for Copernicanism. Galileo has been called the "father of modern observational astronomy",[4] the "father of modern physics",[5][6] the "father of science",[6][7] and "the father of modern science".[8] Maurice Wilkins Maurice Hugh Frederick Wilkins CBE FRS (15 December 1916 – 5 October 2004)[1] was a New Zealand-born English physicist and molecular biologist, and Nobel Laureate whose research contributed to the scientific understanding of phosphorescence, isotope separation, optical microscopy and X-ray diffraction, and to the development of radar. He is best known for his work at King's College London on the structure of DNA which falls into three distinct phases. The first was in 1948-50 where his initial studies produced the first clear X-ray images of DNA which he presented at a conference in Naples in 1951 attended by James Watson. In 1953 Franklin instructed Raymond Gosling to give Wilkins, without condition, a high quality image of "B" form DNA which she had unexpectedly produced months earlier [5] but had “put it aside” [6] to concentrate on other work. Wilkins, having checked he was free to use the photograph to confirm his earlier results [7] showed it to Watson.

Leo Strauss Leo Strauss (September 20, 1899 – October 18, 1973) was a German–American political philosopher and classicist who specialized in classical political philosophy. He was born in Germany to Jewish parents and later emigrated to the United States. He spent most of his career as a professor of political science at the University of Chicago, where he taught several generations of students and published fifteen books.[1] Early life[edit] Leo Strauss was born in the small town of Kirchhain in Hessen-Nassau, a province of the Kingdom of Prussia (part of the German Empire), on September 20, 1899, to Hugo Strauss and Jennie Strauss, née David.

Gregor Mendel Gregor Mendel is recognized as the father of genetics. He: • Founded the science of genetics. Friedrich Nietzsche Friedrich Wilhelm Nietzsche (/ˈniːtʃə/[1] or /ˈniːtʃi/;[2] German: [ˈfʁiːdʁɪç ˈvɪlhɛlm ˈniːt͡sʃə]; 15 October 1844 – 25 August 1900) was a German philosopher, cultural critic, poet, composer and Latin and Greek scholar. He wrote several critical texts on religion, morality, contemporary culture, philosophy and science, displaying a fondness for metaphor[3] and irony. Nietzsche's key ideas include perspectivism, the will to power, the death of God, the Übermensch and eternal recurrence. One of the key tenets of his philosophy is "life-affirmation", which embraces the realities of the world in which we live over the idea of a world beyond. Nietzsche began his career as a classical philologist—a scholar of Greek and Roman textual criticism—before turning to philosophy. In 1869, at age 24, he became the youngest-ever occupant of the Chair of Classical Philology at the University of Basel.

Johannes Kepler Johannes Kepler (German: [ˈkʰɛplɐ]; December 27, 1571 – November 15, 1630) was a German mathematician, astronomer, and astrologer. A key figure in the 17th century scientific revolution, he is best known for his laws of planetary motion, based on his works Astronomia nova, Harmonices Mundi, and Epitome of Copernican Astronomy. These works also provided one of the foundations for Isaac Newton's theory of universal gravitation. During his career, Kepler was a mathematics teacher at a seminary school in Graz, Austria, where he became an associate of Prince Hans Ulrich von Eggenberg.

Rosalind Franklin Rosalind Elsie Franklin (25 July 1920 – 16 April 1958)[1] was a British biophysicist and X-ray crystallographer who made critical contributions to the understanding of the fine molecular structures of DNA (deoxyribonucleic acid), RNA, viruses, coal, and graphite.[2] Her DNA work achieved the most fame because DNA plays an essential role in cell metabolism and genetics, and the discovery of its structure helped her co-workers understand how genetic information is passed from parents to their offspring. Franklin is best known for her work on the X-ray diffraction images of DNA which led to the discovery of the DNA double helix. According to Francis Crick, her data was key to determining the structure[3] to formulate Crick and Watson's 1953 model regarding the structure of DNA.[4] Franklin's images of X-ray diffraction confirming the helical structure of DNA were shown to Watson without her approval or knowledge. Early life and education[edit] Cambridge, Kingston and Paris[edit]

Abraham Maslow Abraham Harold Maslow (/ˈmæzloʊ/[citation needed]; April 1, 1908 – June 8, 1970) was an American psychologist who was best known for creating Maslow's hierarchy of needs, a theory of psychological health predicated on fulfilling innate human needs in priority, culminating in self-actualization.[2] Maslow was a psychology professor at Brandeis University, Brooklyn College, New School for Social Research and Columbia University. He stressed the importance of focusing on the positive qualities in people, as opposed to treating them as a "bag of symptoms."[3] A Review of General Psychology survey, published in 2002, ranked Maslow as the tenth most cited psychologist of the 20th century.[4] Biography[edit]