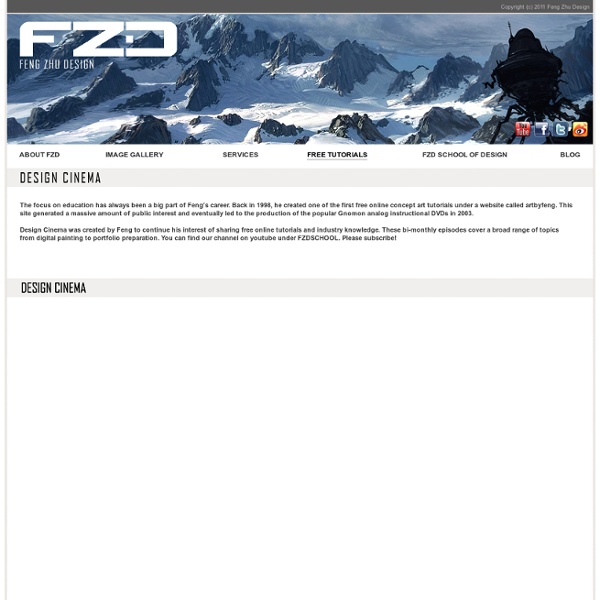 The focus on education has always been a big part of Feng’s career. Back in 1998, he created one of the first free online concept art tutorials under a website called artbyfeng. This site generated a massive amount of public interest and eventually led to the production of the popular Gnomon analog instructional DVDs in 2003. Design Cinema was created by Feng to continue his interest of sharing free online tutorials and industry knowledge. These bi-monthly episodes cover a broad range of topics from digital painting to portfolio preparation. You can find our channel on youtube under FZDSCHOOL.

Top 100 New Adobe Illustrator Tutorials I must be some kind of a mind reader because you were thinking of a single place were you would find the best Illustrator tutorials and here it is. Alongside the previous article you got yourselves a massive tutorial collection here on Design your way which, I believe, you will appreciate. I’m not saying anything else, I’m just going to leave you here with these tutorials, tips and techniques that will help you improve your Adobe Illustrator skills. How to Make an Icy Cocktail The B5 Scrolls on Renderosity.com B5 Scrolls Website Provides Extensive Info on the Creativity Behind "Babylon 5" Basically, as part of a learning exercise in putting a web page together, I ended up contacting a number of the FX artists who worked on the Babylon 5 television show. The reason for that was, there simply wasn’t a lot of information available on the web, and I wanted to include the name of the designer under some of the ship designs that appeared on the show.

Proko Full Access to Figure Drawing Videos - miss new tutorials, signup for my mailing list - Let's get into shading a drawing! We'll explore form, planes and light on form. 25 Excellent Photoshop Texture Tutorials Adding texture to a design can create drastic changes and powerful results. Photoshop provides a number of different possibilities for working with textures, which allows designers to use their creativity. In this post we’ll features 25 tutorials that will help you to learn more about working with textures in Photoshop and how to create impressive results. Looking for hosting?

Beneath the Iron Sky Iron Sky opens today in several countries. To celebrate the occasion and looking back at the production, here's some work I did for the film along the way. I joined the production in 2007 when I was commissioned to do concept art for the first teaser. The Zundapp scene needed some visual development and I provided concepts for the surrounding landscape and accompanying structures. In 2008 I started working fulltime on the film. One of the first tasks was to concept how the space battles in the film would look and feel like.

VFX breakdown: the making of Little Kaiju Created by Nick Losq and directorial duo TWiN, the cute-but-gritty Little Kaiju tells the story of a strange creature who lives in a vending machine in modern Tokyo. Below, Nick runs through the production process on the short. I was first approached by Jon and Josh Baker of the directing group TWiN about Little Kaiju in October 2011. The idea was simple: to follow a small, Uglydoll-inspired creature as it explored the streets of Tokyo. After they shared the concept art, I was sold.

Speedpainting This is a painting I did a while ago. I recorded the screen while painting. I couldn't make it to add an audio track, sorry for that... ^^This tutorial video is also available on my website, some of you might now it already. Actually I did a new painting video today...but when I was finished the video file was corrupt T.TThat's why I'm using this old tutorial. Krita/Tutorial 1 Krita tutorial So why would you want to try out Krita? Artist David Revoy once termed Krita a "Production Beast."