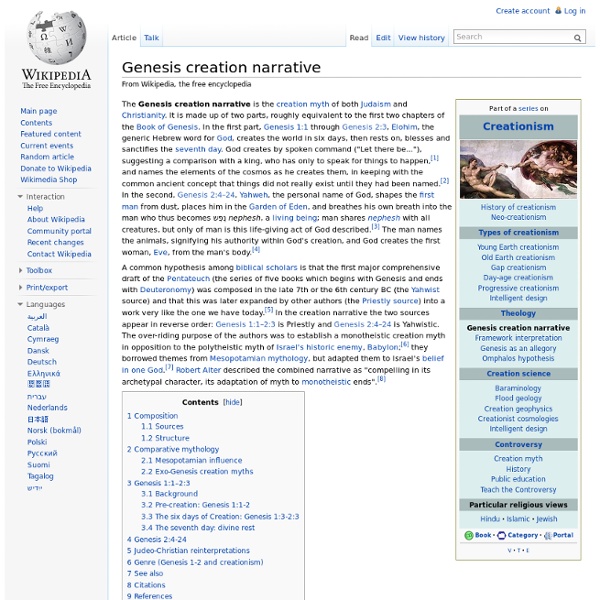 The Genesis creation narrative is the creation myth of both Judaism and Christianity. It is made up of two parts, roughly equivalent to the first two chapters of the Book of Genesis. In the first part, Genesis 1:1 through Genesis 2:3, Elohim, the generic Hebrew word for God, creates the world in six days, then rests on, blesses and sanctifies the seventh day. A common hypothesis among biblical scholars is that the first major comprehensive draft of the Pentateuch (the series of five books which begins with Genesis and ends with Deuteronomy) was composed in the late 7th or the 6th century BC (the Yahwist source) and that this was later expanded by other authors (the Priestly source) into a work very like the one we have today. Composition[edit] Sources[edit] As for the historical background which led to the creation of the narrative itself, a theory which has gained considerable interest, although still controversial, is "Persian imperial authorisation". Structure[edit] Background[edit]

Framework interpretation (Genesis) This article focuses on the views of certain Christian commentators and theologians. For a more general account of the topic, see Genesis creation narrative. The framework interpretation (also known as the literary framework view, framework theory, or framework hypothesis) is a description of the structure of the first chapter of the Book of Genesis (more precisely Genesis 1:1-2:4a), the Genesis creation narrative. It can be illustrated with the following table: Genesis 1 divides its six days of Creation into two groups of three ("triads"). Differences exist on how to classify the two triads, but Meredith G. The framework interpretation is held by many theistic evolutionists and some progressive creationists. Old Testament and Pentateuch scholar Gordon Wenham supports a schematic interpretation of Genesis 1 in his two volume, scholarly commentary on Genesis. Jump up ^ Kline, "Space and Time," p. 6.Jump up ^ Davis A. Henri Blocher (1984).

Salvation Salvation (Latin salvatio; Greek sōtēria; Hebrew yeshu'ah) is being saved or protected from harm[1] or being saved or delivered from some dire situation.[2] In religion, salvation is stated as the saving of the soul from sin and its consequences.[3] The academic study of salvation is called soteriology. Meaning[edit] Abrahamic religions[edit] Judaism[edit] In contemporary Judaism, redemption (Hebrew ge'ulah), refers to God redeeming the people of Israel from their various exiles.[6] This includes the final redemption from the present exile.[7] Judaism holds that adherents do not need personal salvation as Christians believe. The Jewish concept of Messiah visualises the return of the prophet Elijah as the harbinger of one who will redeem the world from war and suffering, leading mankind to universal brotherhood under the fatherhood of one God. When examining Jewish intellectual sources throughout history, there is clearly a spectrum of opinions regarding death versus the Afterlife.

Ancestral sin Ancestral sin (Greek: προπατορικὴ ἁμαρτία or προπατορικὸν ἁμάρτημα, more rarely προγονικὴ ἁμαρτία) is the object of a Christian doctrine taught by the Eastern Orthodox Church. Some identify it as "inclination towards sin, a heritage from the sin of our progenitors".[1] But most distinguish it from this tendency that remains even in baptized persons, since ancestral sin "is removed through baptism".[2] St. Gregory Palamas taught that, as a result of ancestral sin (called "original sin" in the West), man's image was tarnished, disfigured, as a consequence of Adam's disobedience.[3] The Greek theologian John Karmiris writes that "the sin of the first man, together with all of its consequences and penalties, is transferred by means of natural heredity to the entire human race. Since every human being is a descendant of the first man, 'no one of us is free from the spot of sin, even if he should manage to live a completely sinless day.' ... Roman Catholic Church[edit] See also[edit]

Creator deity Polytheism[edit] Platonic demiurge[edit] Monolatrism[edit] Monism[edit] Monism has its origin in Hellenistic philosophy as a concept of all things deriving from a single substance or being. Following a long and still current tradition H.P. "Pantheists are ‘monists’...they believe that there is only one Being, and that all other forms of reality are either modes (or appearances) of it or identical with it." Although, like Baruch Spinoza, some pantheists may also be monists, and monism may even be essential to some versions of pantheism (like Spinoza's), not all pantheists are monists. In Advaita Vedanta, Brahman is the abstract notion of "the Absolute" from which the universe takes its origin and at an ultimate level, all assertions of a distinction between Brahman, other gods and creation are meaningless (monism). Buddhism[edit] In Buddhism, causality is the responsible for creation. Hinduism[edit] Hinduism includes a range of viewpoints about the origin of life, creationism and evolution.

All About Coconut Oil – The Superfood Of All Oils by April McCarthy The health benefits of coconut oil include hair care, skin care, stress relief, maintaining cholesterol levels, weight loss, increased immunity, proper digestion and metabolism, relief from kidney problems, heart diseases, high blood pressure, diabetes, HIV and cancer, dental care, and bone strength. These benefits of oil can be attributed to the presence of lauric acid, capric acid and caprylic acid, and its properties such as antimicrobial, antioxidant, anti-fungal, antibacterial and soothing properties. Coconut oil is used extensively in tropical countries especially India, Sri Lanka, Thailand, Philippines etc., which have a good production of coconut oil. The oil was also once popular in western countries such as United States and Canada; however, there was a strong propaganda in 1970s spread by the corn oil and soy oil industry against coconut oil. How is lauric acid used by our body? Composition of Coconut Oil: Polyunsaturated fatty acids: Linoleic acid. Hair care

Second death The second death is an eschatological concept in Judaism and Christianity related to punishment after a first, natural, death. Judaism[edit] Although the term is not found in the Hebrew Bible, Sysling in his study (1996) of Teḥiyyat ha-metim (Hebrew; "resurrection of the dead") in the Palestinian Targums identifies a consistent usage of the term "second death" in texts of the Second Temple period and early Rabbinical writings. In most cases this "second death" is identical with the judgment, following resurrection, in Gehinnom at the Last Day.[1] Targum Deuteronomy[edit] In Targum Neofiti (Neof.) and the fragments (FTP and FTV) the "second death" is the death the wicked die.[2] Targum Isaiah[edit] Targum Isaiah has three occurrences. Targum Jeremiah[edit] Targum Psalms[edit] The majority reading of Targum Psalm 49:11 has the Aramaic translation "For the wise see that the evildoers are judged in Gehinnom". Rabbinic interpretations[edit] Christianity[edit] Different views[edit] See also[edit]

Afterlife Ancient Egyptian papyrus depicting the journey into the afterlife. Paradise of Bhaishajyaguru discovered at the Mogao Caves. [edit] In metaphysical models, theists generally believe some sort of afterlife awaits people when they die. Members of some generally non-theistic religions such as Buddhism, tend to believe in an afterlife, but without reference to a God. Many religions, whether they believe in the soul's existence in another world like Christianity, Islam and many pagan belief systems, or in reincarnation like many forms of Hinduism and Buddhism, believe that one's status in the afterlife is a reward or punishment for their conduct during life. Reincarnation[edit] Reincarnation refers to an afterlife concept found among Hindus, Buddhists, Jains, Sikhs, Rosicrucians, Theosophists, Spiritists, and Wiccans. One consequence of reincarnationist beliefs is that our current lives are both afterlife and a beforelife. Heaven and hell[edit] Limbo[edit] Purgatory[edit] Ancient religions[edit]

Temptation More informally, temptation may be used to mean "the state of being attracted and enticed" without anything to do with moral, ethical, or ideological valuation; for example, one may say that a piece of food looks "tempting" even though eating it would result in no negative consequences. Religious usage[edit] Temptation has implications deeply rooted in Judaism and the The Old Testament, starting with the story of Eve and the original sin. Many non-Western cultures had no precise equivalent until coming into contact with Europeans. In the text of the Lord's Prayer, the King James Version uses "temptation" to translate the Greek word πειρασμός peirasmos.[1] This word has nothing to do with "temptation" with moral-ethical or spiritual-eschatological overtones. Non-religious usage[edit] Temptation is usually used in a loose sense to describe actions which indicate a lack of self control. See also[edit] References[edit]

Serpent (Bible) In the Hebrew Bible, the Book of Genesis refers to the serpent who was partly responsible for the Fall of Man (Gen 3:1-20). Serpent is also used to describe sea monsters. Examples of these identifications are in the Book of Isaiah where a reference is made to a serpent-like Leviathan (Isaiah 27:1), and in the Book of Amos where a serpent resides at the bottom of the sea (Amos 9:3). Serpent figuratively describes biblical places such as Egypt (Jer 46:22), and the city of Dan (Gen 49:17). The Hebrew word nahash is used to identify the serpent that appears in Genesis 3:1, in the Garden of Eden. God placed Adam in the Garden to tend it and warned Adam not to eat the fruit of the Tree of Knowledge of Good and Evil, "for in the day that thou eatest thereof thou shalt surely die Debate about the serpent in Eden is whether it should be viewed figuratively or as a literal animal. 20th century scholars such as W.