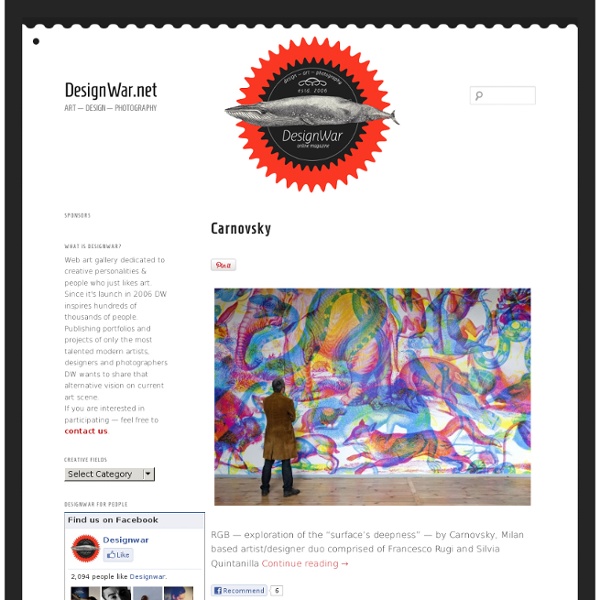 Features « Paper Journal Features Martin Kollar – Nothing Special Pierre Le Hors bebe le strange bebe le strange 'Images -- millions of images -- that's what I eat' --William S. Burroughs (click here for pics only) Here to There [oF] - "programmed illustrations" by @theowatson + Emily Gobeille aka @design-io / + WIN ONE! Inspired by the childhood memories of artworks on their bedroom walls, Here to There is a project by Emily Gobeille & Theo Watson (Design I/O) created two years ago, now available as a limited run of prints. For the project, the duo developed a suite of software tools using openFrameworks to programmatically build elements based around concepts like algorithm, permutation, cause and effect, and topology to name a few. More than 25 mini openFrameworks applications were created that would output graphics as postscript. The graphics outputted by the OF apps became the basic building blocks for the posters, which were combined with character design, narrative and illustration, to create the story of the two worlds of Here To There: the ‘City’ and the ‘Jungle’. Some of the apps would process input input images, while others were drawing tools which would be used to create custom elements for the posters.

Art Boom Minjae Lee is a young South Korean artist whose work is filled with powerful colors, aggressive scenes and a clever blend of beauty, innocence and fragility. At just 22 years old, he’s a self-taught artist, that uses old-fashioned tools, such as markers, pens, crayons, acrylics, to create his illustrations. His dramatic works are all about pattern and texture that just add more authenticity to his illustrations. Contemporary Photography I made this series with the desire to build a set of symbolic portraits inspired by my background of double cultures. I'm French with Middle Eastern origins. I worked by using the pictorial tradition of still lives. I chose to put forward characters where the nature and objects they carry come from different rites and customs. Stripeyhorse Creative June 29th, 2012 We really like the new logo design for British Gymnastics. Using bright bold colourful graphics the swirls track the motion of a gymnast. There is also a video that accompanies the logo design, check it out on our facebook page.

I Love CDs Matt Ottdal has a series of old and new typography experiments. He decided to showcase them in his favorite format, CD covers! "This is my tribute to the Compact Disc format before it settles down into the grave with the Compact Cassette.

i’m jealous of twin-niwt i’m jealous of twin-niwt Ok, before the love, I have to start by saying that tumblr ain’t my favorite thing in the world. It just seems to be a giant sea of images that rarely link back to the artist who made the work. That drives me nuts! Anywho, I digress. When Sandrine Kerfante sent me a link to her beautiful site, twin-niwt I started letting go of my tumblr rage, because I was seeing double… and I liked it! Brand Identity Blog, Creative Direction Blog – Gary Swindell, Aimizm — Gary Swindell is a Creative Director specializing in strategic brand identity. Working in the UK and Scandinavia helping clients deliver through Strategy, Design and Art Direction. Date Item There's a McQeenish vibe to these 'wearable' sculptures by Rien Vollenga. What Katie Does: Sheaff's Ephemera A simply amazing collection of ephemera over at sheaff-ephemera.com, lovingly collected and shared by the site’s owner Dick Sheaff. It covers all sorts of items from Victoriana right up to modern times loosely categorised by type, from elaborate book plates to ticket stubs. You could lose hours happily wandering through it all – a real treasure trove for inspiration. All images © Richard D. Sheaff, from sheaff-ephemera.com, used here with permission. Share this entry with this shortURL: