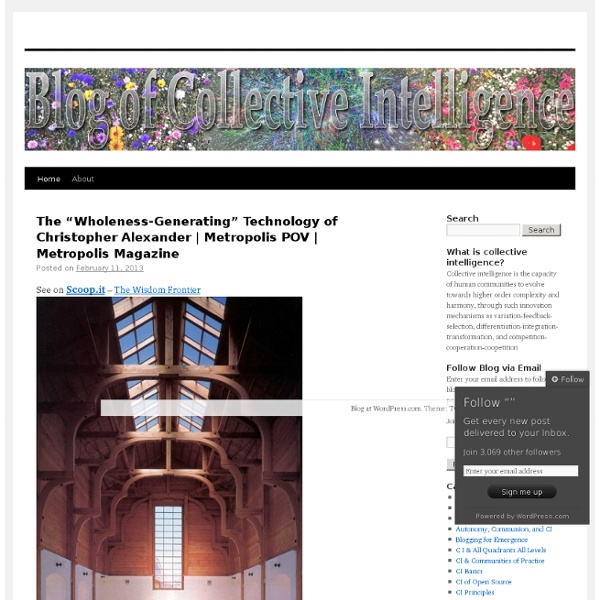 The Emergence of Higher We-Spaces: steps towards humankind awakening to its collective sentience | Lessons from 9 trailblazing practice communities Introductory section of my presentation invited to the Integral European Conference, Budapest, Hungary, May 8-11, 2014 Introduction: personal and planetary contexts (draft) I am irresistibly drawn to observe and participate in the emergence of situations and communities, where people are capable to sense, think, relate, and act, momentarily or in a sustained way, from a beyond-ego state or stage of consciousness. They exist in a domain that I call “higher We-spaces.”

4 POINTS ON COLLECTIVE INTELLIGENCE AND WHY YOU SHOULD CONSIDER IT How intelligent do you really think you are? I would go to bat saying that you are not nearly as smart as you think you are. I know I’m not as smart as I think I am sometimes! Collective Intelligence Collective Intelligence As we explore ways to generate more effective groups, organizations, institutions, and other human systems, it may help to begin by taking a closer look at collective intelligence. When I investigate the problems that we face in the world today, I seldom find that individual evil is a central cause.

Twitter: immediacy and collective intelligence When working on a Wikipedia entry just last week, I was confronted once again with the helplessness one might experience when the computer does not work properly or when the internet connection is down. Upon typing in the Wikipedia URL, nothing happened. I found myself staring at the blank page before me. What is one to do? I refreshed the page, still nothing happened. Artificial Intelligence Versus Collective Intelligence (18) We want scientifically-grounded two-way traffic between philosophy and the Web. Technologies are ideas given flesh, the exteriorization of the conceptual structures and utopian impulses of humanity, and so are alien only insofar as their history and materiality are unknown. Artifactualization does not happen for and of itself, but reflects the ontological assumptions of their historical period. What is most interesting about the Web is it is clear that older philosophical categories like "mind" and "language" have to be fundamentally rethought.

An interview with Don Tapscott - McKinsey Quarterly - Organization - Strategic Organization Video Making internal collaboration work: An interview with Don Tapscott The author and strategist describes why effective knowledge management within enterprises requires replacing e-mail with social media. Collective intelligence - Definition Collective intelligence as characterized by Tom Atlee, Douglas Engelbart, Cliff Joslyn, Ron Dembo, and other theorists, is that which overcomes "groupthink" and individual cognitive bias in order to allow a relatively large number of people to cooperate in one process - leading to reliable action. In this context, it refers to a very rigorous consensus decision making, and may properly be considered a subfield of sociology. A less anthropomorphic conception is that a large number of cooperating entities can cooperate so closely as to become indistinguishable from a single organism with a single focus of attention and threshold of action. These ideas are more closely explored in Society of Mind theory and sociobiology, as well as in biology proper.

What Is Intelligence? Just a Byproduct of Cooperation. What's the Latest Development? By developing computer simulations of neural networks that evolved over 50,000 generations, scientists at Trinity University have concluded that intelligence is an evolutionary byproduct of social teamwork. Each neural network, or 'brain', took part in two social dilemmas in which "two players must choose between cooperation and defection during repeated rounds. Staying in Touch Searching for life beyond our teeming planet has led to some innovative collaborative approaches to generating knowledge right here at home. PHONE HOME: E.T. tried to call home using this "phone."MATTINGLY23/WIKIPEDIA.ORG Earthlings have wondered for a long time whether life-forms as smart as we are—or smarter—are out there. Our species finds the idea of intelligent extraterrestrial life so fascinating that it has become a staple of literature, music, and film.

Dr. Quantum Visits Flatland - Free Science Videos and Lectures Dr. Quantum welcomes you to flat-land, the world of only two dimensions! In this world there is only forwards, backwards and left and right. There is no up and no down! Collective Intelligence: Can it save anti-virus apps? No, it's not the "Borg" from Star Trek. But, Collective Intelligence uses the same concept and could revolutionize the way anti-virus applications work. I have been following a University of Michigan project called CloudAV Architecture: N-Version Anti-Virus (pdf). Like most of us, researchers at the University of Michigan realize traditional anti-virus applications are not deterrents.