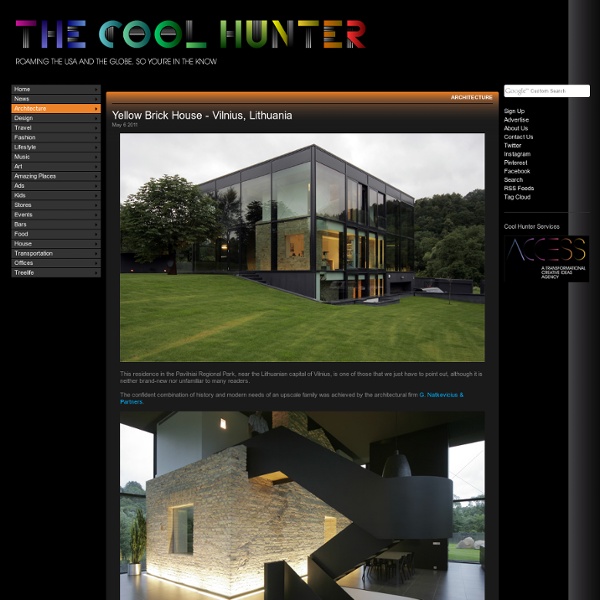 This residence in the Pavilniai Regional Park, near the Lithuanian capital of Vilnius, is one of those that we just have to point out, although it is neither brand-new nor unfamiliar to many readers. The confident combination of history and modern needs of an upscale family was achieved by the architectural firm G. Natkevicius & Partners. Located by in the valley of river Vilnia that gave the city its name, the park and the city have a rich history with the oldest written records dating back to 1323. It seems that in Vilnius private residents can buy pieces of such storied land, and when the current owner of the site - a banker and collector of antique books - bought it, a single bright-yellow building stood on it. The yellow house itself was not as big as the four-member family wanted their home to be, so they decided to build their new home of glass and erect it around the historic brick house.

L House - Buenos Aires This residence was completed in January this year, yet it exudes a classic, modernist elegance that will ensure it will look just as timeless 50 years from now. Located in Buenos Aires, the “L House” by architect Mathias Klotz and associate architect Edgar Minond is the main residence of a small family. Although this could be categorized as yet another grouping of concrete boxes representing the tiresome trend that just does not seem to want to die, this residence avoids all of the pitfalls most of such houses fall into. In contrast to the stacked-concrete-boxes syndrome, not one section of this residence sticks out over anything, nor jut in an odd angle. The house looks unpretentious and serene. European modernist sensitivities are apparent both inside and out. Without being too severe or controlled, this residence is composed of order. This kind of simplicity is difficult to achieve and therefore it is so rare. The architect, Mathias Klotz, was born in Viña del Mar, Chile, in 1965.

Sky Garden House - Architecture Linked - Architect & Architectural... I think one of the reasons that many are skeptical about environmental design is because they think its terribly complex and costly. It does take a bit more effort on the front end, but it's definitely not rocket science. This architecture by Guz Architects is a wonderfully developed minimalistic design with a curvilinear flare that really brings out the organic coverings. I'm most impressed with how design facilitates the needs of the plants and shrubs located throughout the house. See more at Guz Architects

Integral House, Toronto - Canada Math professor Dr. James Stewart, who is also a former violinist with the Hamilton Symphony Orchestra near Toronto, Ontario, has made millions writing calculus textbooks. When he decided to spend most of his fortune on a residence, he could have used any architect anywhere in the world. Instead of an international star, he selected the then-relatively unknown pair, Brigitte Shim and Howard Sutcliffe of Shim Sutcliffe to create his residence in a ravine in the posh Toronto neighborhood of Rosedale. Stewart was not looking to build just a residence, though. He also wanted a private concert hall and lots of curves. A decade after the initial discussions with Shim and Sutcliffe, the $24 million US, 18,000-square-foot Integral House was completed. The house exudes a patina, a classic semi-Scandinavian simplicity that makes it seem older, more established and mature than a brash, brand-new house. Photographs by Jim Dow, Ed Burtynsky & Bob Gundu

Powerhouse Company Rooms with many views Villa 1 was Powerhouse Company’s first project: our chance to present our manifesto to the world. We were a fledgling practice then, working from kitchen-table offices in Rotterdam and Copenhagen. But we knew exactly what we wanted to build (a house with great spatial qualities and meticulous detailing) and how we wanted to build it (in a smooth, service-driven process). The design of Villa 1 was inspired by the site, the clients’ paradoxical desire to live “in a modern glass house with all the cosiness of an old farmhouse”, and by Mies van der Rohe’s Farnsworth House and the work of Saarinen. The project embodies our ideas about professionalism. The site: a manufactured forest The plot was in a wood which, like so much of Dutch nature, is entirely manmade. Because the house’s spatial needs required twice the volume allowed by the regulations, we designed it upside down, placing all the bedrooms underground with the daytime functions on top. Why oh Y? Three solid forms

Still Looking For Paradise? Maldives - justpaste.it Double chain of twenty-six atolls… The Republic of Maldives, or simply the Maldives, is an island nation in the Indian Ocean. It consists of approximately 1,190 coral islands grouped in a double chain of 26 atolls, along the north-south direction, spread over roughly 90,000 square kilometers, making this one of the most disparate countries in the world. The atolls are composed of live coral reefs and sand bars, situated atop a submarine ridge 960 kilometers long that rises abruptly from the depths of the Indian Ocean and runs from north to south. Crystal clear waters, beautiful white sand beaches, swaying palm trees and fabulous dive sites – that’s why the Maldives, is known for being one of the best tropical holiday destinations in the world. ...and no need to climb ;) With an average ground level of 1.5 metres (4 ft 11 in) above sea level, it is the lowest country on the planet. Summer never ends ... Crystal clear waters and azure blue lagoons... Resorts in the Maldives

Bridle Road Residence - Cape Town, South Africa Bridle Road Residence in Cape Town, South Africa, is a beautiful example of a sizeable structure that does not impose itself onto the landscape at the base of Table Mountain. The single-family residence does not look massive or overly grand, but instead exudes a classic elegance with Scandinavian/Japanese lightness, precision and scale. The proportions and division of the walls and windows — including the “picture windows” overlooking the Cape Town harbor — create an openness without the feel of exposure. Interior and exterior spaces are integrated seamlessly, which adds to the sense of site appropriateness — that this building belongs to this site. The architecture is by Cape Town’s Antonio Zaninovic, known for his ability to let the landscape lead the architectural solutions. The interiors of the residence are by Lucien Rees of New York City-based Rees Roberts + Partners and the landscape by David Kelly of Rees Roberts + Partners.

Simply Modern: Nice Modular Home Plan, Design & Decor Contemporary house plans and designs rarely make the papers unless there is something sensational about them, be it a structural innovation of electric set of furnishings, accessories or decorations – and the word ‘nice’ (applied to architecture at least) can seem more like an insult than compliment – but it does not have to be bad. Sometimes it is worthwhile to take a small step back and look at a elemental, elegant and excellently-executed modern home that sits on a simple, planned and regular grid and has a clear concept carried from rough plans to constructed completion. This modern house by Chen + Suchart is composed of simple repetitive modules from the rectangular dimensional wood siding to the regular cubes of steel frames that repeat across the second story. The main floor is essentially a perforated solid box construction while the upper floor is metal and glass frame-and-infill – a very simple division of building types by story that is legible on all sides.