Animal did you knows 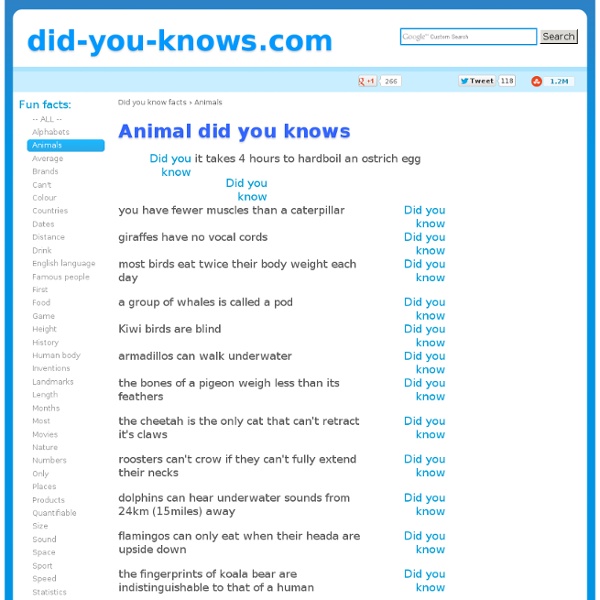 sidewalk chalk guy sidewalk chalk guy «« back to gprime.net all material copyrighted by its original creator | Awesome Products that Make You Wish You Thought of Them First Feeding the inner geekness… Loading… A Big Make Attack Bed… Two all beef patties, special sauce, lettuce cheese, pickles onions on a sesame seed bed. A Bubble Wrap Calendar… This is one calendar I would consider fun. Keyboard imprint on sole of shoe. $44.38 in Perspective We recently received a donation of coins. In fact, it was literally hundreds of coins. The coins came from Ms.

True Friends True Friends After losing his parents, this 3 year old orangutan was so depressed he wouldn't eat and didn't respond to any medical treatments. The veteranarians thought he would surely die from sadness. The zoo keepers found an old sick dog on the grounds in the park at the zoo where the orangutan lived and took the dog to the animal treatment center. Black Hole Birth Announcement - Space News For the first time, astronomers have produced a complete description of a black hole, a concentration of mass so dense that not even light can escape its powerful gravitational pull. Their precise measurements have allowed them to reconstruct the history of the object from its birth some six million years ago. Using several telescopes, both ground-based and in orbit, the scientists unraveled longstanding mysteries about the object called Cygnus X-1, a famous binary-star system discovered to be strongly emitting X-rays nearly a half-century ago.

Hilarious Celebrity Portraits New York-based photographer Martin Schoeller loves to make us laugh! Take a look at his celebrity portraits of everyone from Quentin Tarantino to Chris Rock and you'll notice a common theme running throughout his work. They're wonderfully wacky! Having worked as an assistant for Annie Leibovitz from 1993 to 1996, Schoeller has the guts to create dramatic scenes that call for his subjects to work outside the box.

Cape Lookout National Seashore - Beach camping All camping within the park is primitive beach camping: there are no designated campgrounds. Permits are not generally required for camping, but overnight groups of 25 or more are required to obtain a Special Use Permit. Permit applications can be downloaded from the Camping Permits webpage. Camping is limited to 14 consecutive days. Tent and vehicle campsites must be at least 100 feet from wells, shade shelters, bulletin boards, docks or other structures and at least 100 yards from any cabin or house. Camping is not permitted in long term parking areas, at the Harkers Island Administrative Site, in Portsmouth Village, in the Cape Lookout Light Station complex, in the Cape Village (including the Cape Lookout Coast Guard Station), or on property held under private lease.

Two Stupid Cats It occurs to me I never mentioned that Lola, my lovable but not-all-there kitty, has a sister named Emmy. Emmy is her polar opposite: moody, intelligent, and horribly unfriendly. I remember when I adopted them at the Kitten Rescue. Lola sat there like a tiny furry beached whale, staring off into space, and Emmy was hunched in the corner of her cage scowling at everyone that walked by. I imagined that if Emmy was a human, she'd have a tattered journal full of Morrissey-esque poetry. I had no idea what I was in for when I picked them out.