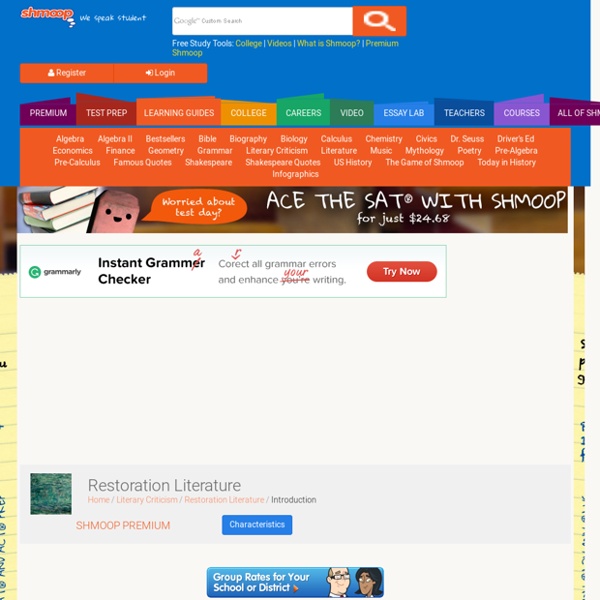 In a Nutshell The Restoration is a period in literary history full of humor and hanky-panky. Shocking, right? We thought dudes that looked like this would be super-uptight. But nope—the most popular writers of the age wrote bawdy comedies packed with sexual innuendo. These writers loved to satirize social manners, sexual codes, and the social classes of their day. What set the literature of this period going was—history time! What's more, the theaters—which had been closed for more than a decade by those uptight Puritans who were in power before Charles II was restored to the throne—were reopened during this time. But it wasn't just theater that was important during the Restoration age. The Restoration writers were men and women who liked to let their hair down, so to speak (they were actually wearing their hair under wigs). If you're into comedy—and especially stand-up comedy—then you should definitely care about Restoration literature. Why did the hipster burn her mouth?

Seat Upholstery, 1965 Galaxie / 500XL, 500 Seat Cover - Front/Rear Set Our 1965 Galaxie 500XL Seat Upholstery is a correct reproduction of the original featuring 3 heat sealed vertical lines, and 3 pleated lines in the center. We offer the original Sierra grain in 32 oz. vinyl, with the correct vertical patterns sewn as original. Seat back buttons not included. Middle Ages for Kids: History of the Medieval Knight History >> Middle Ages for Kids What was a knight? There were three main types of soldiers during the Middle Ages: foot soldiers, archers, and knights. The knights were heavily armored soldiers who rode on horseback. Only the wealthiest nobles could afford to be a knight. They needed very expensive armor, weapons, and a powerful war horse. Renaissance & Reformation Summary The Renaissance began in the cities of Northern Italy, leading to a flowering of art, sculpture and painting. It also swept into Northern Europe but there the more austere circumstances caused it to focus on religion and literature. The invention of the printing press would also enable new religious ideas to sweep across Europe.

Quick Facts About Medieval Times Medieval FoodAlthough most people bought spices from their local market, those spices had often travelled miles, from the Middle East and Asia. Some crusaders to the Holy Land brought back spices with them, trying to replicate food they had tried whilst en route to Jerusalem.From common spices such as cinnamon, to exotic and expensive flavourings like nutmeg and saffron, there were spices to suit every purse and palate in the Middle Ages, an era when the flavour of food was appreciated and extremely important.spices were often passed around during a meal, rather than being added during the cooking process. This meant that each person could tailor his or her dish to their own particular needs and tastes. Medieval CastlesNot all Dungeons were underground. KnightsFor centuries the chivalric knight stood above all others on the battlefield.

Neoclassical Poets English poets from 1660 to 1798 are generally known as neo-classical poets. They are called so because they had a great respect for classical writers and imitated much from them. Order, correctness and established rules were carefully observed. Set phrases and reasons were commonly used in their poetry. Restoration (England) Facts, information, pictures Restoration, in English history, the reestablishment of the monarchy on the accession (1660) of Charles II after the collapse of the Commonwealth (see under commonwealth) and the Protectorate. The term is often used to refer to the entire period from 1660 to the fall of James II in 1688, and in English literature the Restoration period (often called the age of Dryden) is commonly viewed as extending from 1660 to the death of John Dryden in 1700. Restoration of Charles II After the death of Oliver Cromwell in Sept., 1658, the English republican experiment soon faltered. Cromwell's son and successor, Richard, was an ineffectual leader, and power quickly fell into the hands of the generals, chief among whom was George Monck, leader of the army of occupation in Scotland.

Medieval Period Medieval Literature (c. 350 – c. 1475) The Medieval period runs from the end of Late Antiquity in the fourth century to the English Renaissance of the late fifteenth century. The early portion of the Medieval period in England is dominated by Anglo-Saxons, whose language is incomprehensible to today's speakers of English. That early portion is known as the Old English period. (It is covered in a separate section of this website.)