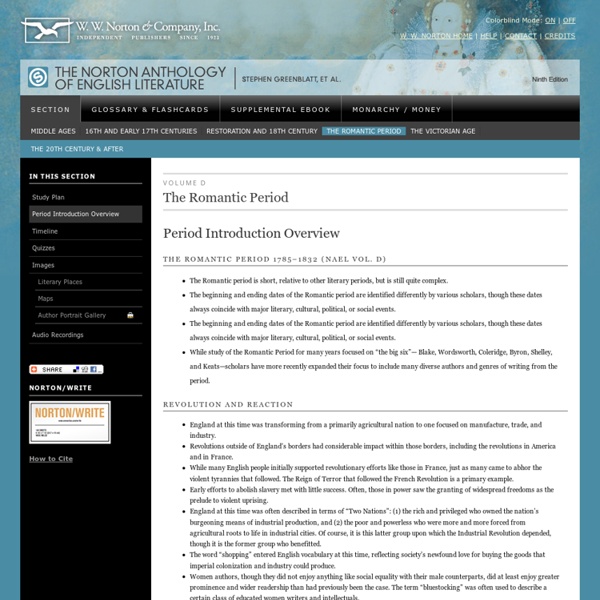 Lecture 16: The Romantic Era The categories which it has become customary to use in distinguishing and classifying "movements" in literature or philosophy and in describing the nature of the significant transitions which have taken place in taste and in opinion, are far too rough, crude, undiscriminating -- and none of them so hopelessly as the category "Romantic."---Arthur O. Lovejoy, "On the Discriminations of Romanticisms" (1924) Ask anyone on the street: "what is Romanticism?" and you will certainly receive some kind of reply.

The Norton Anthology of English Literature: The Romantic Age: review: Summary Writers working in the time period from 1785 to 1830 did not think of themselves as “Romantics,” but were seen to belong to a number of distinct movements or schools. For much of the twentieth century scholars singled out five poets—Wordsworth, Coleridge, Byron, Percy Shelley, and Keats—and constructed a unified concept of Romanticism on the basis of their works. Some of the best regarded poets of the time were in fact women, including Anna Barbauld, Charlotte Smith, and Mary Robinson.

Untitled Document By the late 18th century in France and Germany, literary taste began to turn from classical and neoclassical conventions. The generation of revolution and wars, of stress and upheaval had produced doubts on the security of the age of reason. Doubts and pessimism now challenged the hope and optimism of the 18th century. Men felt a deepened concern for the metaphysical problems of existence, death, and eternity. Romanticism Romanticism arose as a reaction against the excessive rationalism of the Enlightenment. It drew upon the French Revolution's rejection of aristocratic social and political norms. It was also influenced by the theory of evolution and uniformitarianism, which argued that "the past is the key to the present."

The Culture of Rebellion in the Romantic Era Eugene Delacroix, Liberty Leading the People, 1830. One of Delacroix’s best known works, the painting depicts a bare-breasted Liberty leading Parisians of mixed social and economic backgrounds into battle. The Romantic era is typically noted for its intense political, social, and cultural upheavals. The period is conventionally marked as beginning with the French Revolution in 1789 and ending with the passing of the Great Reform Bill in 1832, occurrences which exemplify the political zeal of the late eighteenth- and early nineteenth centuries as well as the resultant changes brought about in society. Events initially external to England, such as the French Revolution, are internalized in Romantic literature as a part of the debates on more relevant, internal issues in English politics, such as the prededing American Revolution and the imminent Irish Uprising of 1798.

Romanticism Alternative titles: Romantic movement; Romantic Style Romanticism, Britannica Classic: “The Spirit of Romanticism”Encyclopædia Britannica, Inc.attitude or intellectual orientation that characterized many works of literature, painting, music, architecture, criticism, and historiography in Western civilization over a period from the late 18th to the mid-19th century. Romanticism can be seen as a rejection of the precepts of order, calm, harmony, balance, idealization, and rationality that typified Classicism in general and late 18th-century Neoclassicism in particular. It was also to some extent a reaction against the Enlightenment and against 18th-century rationalism and physical materialism in general.

Famous people of the Romantic Period The Romantic period or Romantic era lasted from the end of the Eighteenth Century towards the mid 19th Century. Romanticism was a movement which highlighted the importance of: The individual emotions, feelings and expressions of artists.It rejected rigid forms and structures. Instead it placed great stress on the individual, unique experience of an artist / writer.Romanticism gave great value to nature, and an artists experience within nature. This was in stark contrast to the rapid industrialisation of society in the Nineteenth Century.Romanticism was considered idealistic – a belief in greater ideals than materialism and rationalism and the potential beauty of nature and mystical experience.Romanticism was influenced by the ideals of the French and American revolution, which sought to free man from a rigid autocratic society. Over time, it also became more associated with burgeoning nationalistic movements, e.g. movement for Italian independence.

English literature: The Romantic Period At the turn of the century, fired by ideas of personal and political liberty and of the energy and sublimity of the natural world, artists and intellectuals sought to break the bonds of 18th-century convention. Although the works of Jean Jacques Rousseau and William Godwin had great influence, the French Revolution and its aftermath had the strongest impact of all. In England initial support for the Revolution was primarily utopian and idealist, and when the French failed to live up to expectations, most English intellectuals renounced the Revolution. However, the romantic vision had taken forms other than political, and these developed apace.

Romanticism If the Enlightenment was a movement which started among a tiny elite and slowly spread to make its influence felt throughout society, Romanticism was more widespread both in its origins and influence. No other intellectual/artistic movement has had comparable variety, reach, and staying power since the end of the Middle Ages. Beginning in Germany and England in the 1770s, by the 1820s it had swept through Europe, conquering at last even its most stubborn foe, the French. It traveled quickly to the Western Hemisphere, and in its musical form has triumphed around the globe, so that from London to Boston to Mexico City to Tokyo to Vladivostok to Oslo, the most popular orchestral music in the world is that of the romantic era.

About the Romantic Period The romantic period is a term applied to the literature of approximately the first third of the nineteenth century. During this time, literature began to move in channels that were not entirely new but were in strong contrast to the standard literary practice of the eighteenth century. How the word romantic came to be applied to this period is something of a puzzle. Originally the word was applied to the Latin or Roman dialects used in the Roman provinces, especially France, and to the stories written in these dialects. Romantic is a derivative of romant, which was borrowed from the French romaunt in the sixteenth century.