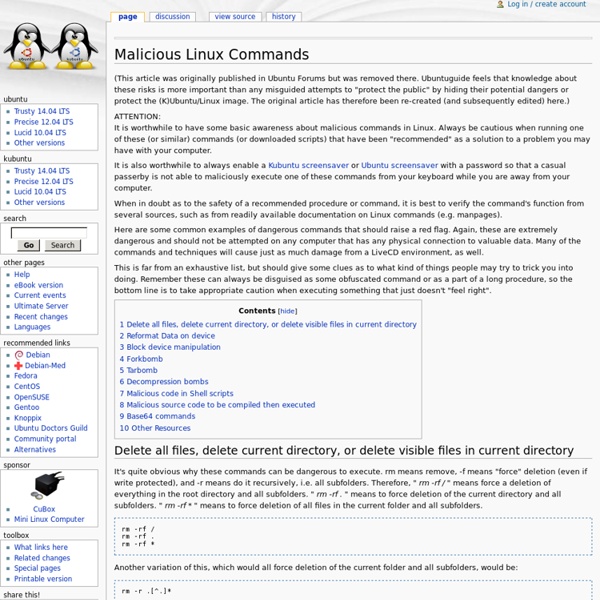 From (This article was originally published in Ubuntu Forums but was removed there. Ubuntuguide feels that knowledge about these risks is more important than any misguided attempts to "protect the public" by hiding their potential dangers or protect the (K)Ubuntu/Linux image. The original article has therefore been re-created (and subsequently edited) here.) ATTENTION: It is worthwhile to have some basic awareness about malicious commands in Linux. Always be cautious when running one of these (or similar) commands (or downloaded scripts) that have been "recommended" as a solution to a problem you may have with your computer. It is also worthwhile to always enable a Kubuntu screensaver or Ubuntu screensaver with a password so that a casual passerby is not able to maliciously execute one of these commands from your keyboard while you are away from your computer. Here are some common examples of dangerous commands that should raise a red flag. rm -rf / rm -rf . rm -rf * rm -r Forkbomb In Perl or

Google Dorks cache: If you include other words in the query, Google will highlight those words within the cached document. For instance, [cache:www.google.com web] will show the cached content with the word “web” highlighted. This functionality is also accessible by clicking on the “Cached” link on Google’s main results page. History of Linux Visits since July 2002 version 2.2.0 by Department of Computer Science University of Illinois at Urbana-Champaign This article is hosted at : [ Hebrew ] | [ Bulgarian ] [ Japanese ] [ Chinese ] [ Romanian ] [ Portuguese ] All the Best Linux Cheat Sheets Linux Security Quick Reference Guide - An awesome security checklist reference IP Tables - If you are interested in Linux firewalls this is a must have TCPDump - Great cheat sheet to an awesome security tool Wireshark Filters - An awesome list of filters for the best packet sniffing utility IP Access Lists - Cheat sheet for IP Access Lists Common Ports - In case you don’t have all common ports memorized netcat - Reference to the swiss army knife of networking

Google hacking Basics[edit] The following search query will locate all websites that have the words "admbook" and "version" in the title of the website. It also checks to ensure that the web page being accessed is a PHP file. HTG Explains: The Linux Directory Structure Explained If you’re coming from Windows, the Linux file system structure can seem particularly alien. The C:\ drive and drive letters are gone, replaced by a / and cryptic-sounding directories, most of which have three letter names. The Filesystem Hierarchy Standard (FHS) defines the structure of file systems on Linux and other UNIX-like operating systems.

JamesM's kernel development tutorials This set of tutorials aims to take you through programming a simple UNIX-clone operating system for the x86 architecture. The tutorial uses C as the language of choice, with liberally mixed in bits of assembler. The aim is to talk you through the design and implementation decisions in making an operating system. The OS we make is monolithic in design (drivers are loaded through kernel-mode modules as opposed to user-mode programs), as this is simpler. This set of tutorials is very practical in nature. The theory is given in every section, but the majority of the tutorial deals with getting dirty and implementing the abstract ideas and mechanisms discussed everywhere.

Password crackers SecTools.Org: Top 125 Network Security Tools For more than a decade, the Nmap Project has been cataloguing the network security community's favorite tools. In 2011 this site became much more dynamic, offering ratings, reviews, searching, sorting, and a new tool suggestion form . How to disable SSH host key checking Remote login using the SSH protocol is a frequent activity in today's internet world. With the SSH protocol, the onus is on the SSH client to verify the identity of the host to which it is connecting. The host identify is established by its SSH host key. Typically, the host key is auto-created during initial SSH installation setup. By default, the SSH client verifies the host key against a local file containing known, trustworthy machines.

Short Film of the Day: Stuxnet: Anatomy of a Computer Virus Why Watch? Because we should challenge how we define a film. Most of the shorts featured in this column are either easy to spot as stories or completely experimental. Even when a documentary short is in the spotlight, it tells a clear tale of people doing things. Cool, but obscure unix tools Just a list of 20 (now 28) tools for the command line. Some are little-known, some are just too useful to miss, some are pure obscure -- I hope you find something useful that you weren't aware of yet! Use your operating system's package manager to install most of them. (Thanks for the tips, everybody!) dstat & sar

Speaking UNIX: The best-kept secrets of UNIX power users If you're wondering why I'm wearing dark sunglasses, a fake moustache, and a baseball cap (featuring the logo of professional curling team, The Floating Stones), I'm on the lam. I'm dodging black remote-controlled helicopters, pasty-white systems administrators, and the combined forces of many daemons to bring you some of the best-kept secrets of UNIX® power users. Don your aluminum foil hat and read on. Save the environment variables

Firesheep - Wikipedia, the free encyclopedia - StumbleUpon The extension was created as a demonstration of the security risk of session hijacking vulnerabilities to users of web sites that only encrypt the login process and not the cookie(s) created during the login process.[3] It has been warned that the use of the extension to capture login details without permission would violate wiretapping laws and/or computer security laws in some countries. Despite the security threat surrounding Firesheep, representatives for Mozilla Add-ons have stated that it would not use the browser's internal add-on blacklist to disable use of Firesheep, as the blacklist has only been used to disable spyware or add-ons which inadvertently create security vulnerabilities, as opposed to attack tools (which may legitimately be used to test the security of one's own systems).[4] Note that even if they did, it wouldn't actually prevent anyone from using Firesheep, as Firefox contains a hidden setting to disable this blacklist.[5] Countermeasures[edit] HTTPS[edit]

Learn Linux, 101: The Linux command line Overview This article gives you a brief introduction to some of the major features of the bash shell, and covers the following topics: Interacting with shells and commands using the command lineUsing valid commands and command sequencesDefining, modifying, referencing, and exporting environment variablesAccessing command history and editing facilitiesInvoking commands in the path and outside the pathUsing man (manual) pages to find out about commands This article helps you prepare for Objective 103.1 in Topic 103 of the Junior Level Administration (LPIC-1) exam 101.