Open source is changing the world: join the movement 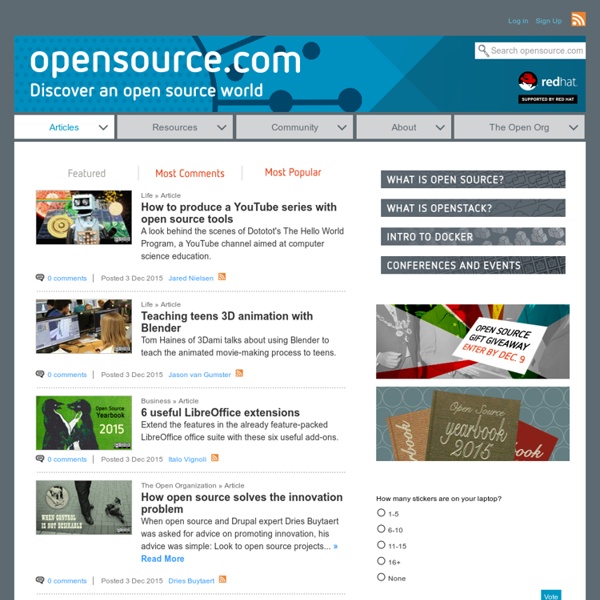 27 Best Linux Tutorial Books That You Need To Download Now Do I need to describe what is Linux? No, I don’t. Because in the world of Technology, Everyone knows it. But why people do know? s Python Class - Google's Python Class - Google Code Welcome to Google's Python Class -- this is a free class for people with a little bit of programming experience who want to learn Python. The class includes written materials, lecture videos, and lots of code exercises to practice Python coding. These materials are used within Google to introduce Python to people who have just a little programming experience. The first exercises work on basic Python concepts like strings and lists, building up to the later exercises which are full programs dealing with text files, processes, and http connections.

Install DSS on Windows with Docker - Dataiku - Collaborative Data Science Platform Dataiku DSS only runs on Linux servers for production usage. Support of Mac OS X is available for experimentation, evaluation purpose and playing with Kaggle datasets. Dataiku does not provide any version of DSS for Microsoft Windows. However, you have the option to virtualize a Linux system on Windows and install DSS on it. We do not recommend that you use Docker for running DSS on Windows. We now provide a simple way to run DSS on Windows using Virtualbox, which does not require any complex manipulation.

22 Free Resources for Data Structures and Algorithms: Binary Search Algorithms, String Algorithms… When you first start out with a tech career, you’re going to need to learn data structures and algorithms. These are the basis behind computer programming, and every high-quality employer will make sure you understand them. For beginners, though, it can be difficult to understand. In this series of technical blog posts, we’ll be sharing the resources we’ve collected here at Make School. In this post, we’ll share our resources for number bases, recursion and search algorithms, and string algorithms. Number bases BaBE - Bash By Examples - LinuxIntro BaBE - Bash By Examples; Your significant Linux scripting tutorial;; The easiest way to get your feet wet with a programming language is to start with a program that simply outputs a trivial text, the so-called hello-world-example. Here it is for bash: create a file named hello in your home directory with the following content: #!

Fredrik Håård's Blaag I believe that Python is important for software development. While there are more powerful languages (e.g. Lisp), faster languages (e.g. Install Kitematic on Windows 10, 8, and 7 all Editions? GUI for Docker In this post, I will show you how to install Kitematic on Windows 10, 8, and 7 all editions. Kitematic is a Docker GUI that makes managing Docker containers a breeze. Previously, I have explained what is Docker and how it can make life easier for home server owners.

The 10 Best Coding Challenge Websites for 2018 – Coderbyte At the end of 2016 I published the article: The 10 most popular coding challenge websites for 2017. The list was based on a few resources such as popular blog posts, Quora posts, articles, Google searches, and popular posts on forums like r/learnprogramming and Hacker News. This updated 2018 list features 10 websites that offer the best coding challenges and resources to help new and intermediate developers improve their skills, prepare for interviews, and progress in their careers. The ordering of the list is based on level of difficulty (beginner to advanced). 1.

Writing Robust Bash Shell Scripts - David Pashley.comDavid Pashley.com Many people hack together shell scripts quickly to do simple tasks, but these soon take on a life of their own. Unfortunately shell scripts are full of subtle effects which result in scripts failing in unusual ways. It’s possible to write scripts which minimise these problems. In this article, I explain several techniques for writing robust bash scripts. How often have you written a script that broke because a variable wasn’t set?