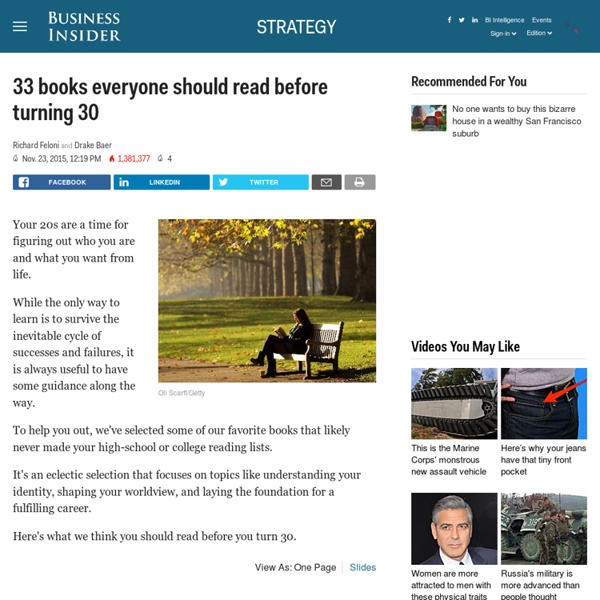 Culture - The 21st Century’s 12 greatest novels 12. Jeffrey Eugenides, Middlesex (2002) What are the greatest novels of the opening years of this tumultuous century? In search of a collective critical assessment, BBC Culture contributor Jane Ciabattari polled several dozen book critics, including The New York Times Book Review’s Parul Sehgal, Time magazine's book editor Lev Grossman, Newsday book editor Tom Beer, Bookslut founder Jessa Crispin, C Max Magee, founder of The Millions, Booklist's Donna Seaman, Kirkus Reviews' Laurie Muchnick and many more. We asked each to name the best novels published in English since 1 January 2000. The critics named 156 novels in all, and based on the votes these are the top 12.

Literary SFF: 'The Buried Giant' by Kazuo Ishiguro - GeekDad ‘Should I fall and you survive, promise me this. That you’ll carry in your heart a hatred of Britons.’‘What do you mean, warrior? Which Britons?’ Librarians in uproar after borrowing record of Haruki Murakami is leaked Librarians in Japan have ditched their traditional regard for silence to accuse a newspaper of violating the privacy of Haruki Murakami, Japan’s best-known contemporary writer, after it revealed his teenage reading habits. As a schoolboy in the western port city of Kobe, Murakami delved into the three-volume complete works of the French writer Joseph Kessel, according to library cards leaked to the Kobe Shimbun newspaper. It is not clear, however, if the then student at Kobe high school read Belle De Jour, Kessel’s 1928 novel about a woman who works as a prostitute by day and reverts to her life as a housewife in the evening.

The non-western books that every student should read The Wretched of the Earth by Frantz Fanon I teach it to my first years and return to the book through their degree. It is the perfect introduction to complex ideas: oppressive socio-economic political structures, forms of resistance and defiance, and the point at which violence becomes justifiable. Students always find the book challenging, disturbing and thought provoking. And that is exactly what university syllabi ought to be! Sunny Singh, lecturer at London Metropolitan University and author of Hotel Arcadia

IMDB Top 250 Movies of All Time The top 250 movies of all time as voted by IMDb users. This list reflects the list in mid-2013. It changes over time, so we will release updated versions each year. This list is currently the most popular list on listchallenges.com, so take the challenge and then share your score on Facebook to see if you are the biggest movie buff of all your friends! 65,243 users · 345,792 views Required scores: 1, 56, 81, 105, 136

How to Read a Book a Week It was the late 1980s and I was sitting in a university lecture hall listening to Abbie Hoffman, an author and an activist, ranting about my generation’s indifference. Next to me was Gloria Emerson, a brilliant and eccentric journalist and author. We were discussing Hoffman’s talk when I told her how much I loved being in the thick of all these ideas. “It’s such a unique opportunity to be here,” I said to her, “to be part of these conversations with smart, thoughtful people.” “Oh, don’t be silly,” she responded. “Anybody can be part of these conversations. How Akira Kurosawa's Seven Samurai Perfected the Cinematic Action Scene: A New Video Essay Jonathan Lethem knows a thing or two about storytelling as well as about caped comic-book characters, and on a recent podcast appearance he accused films about the latter of an inability to do the former: “I think one of the least satisfying film genres I’ve ever encountered is the contemporary superhero movie, which just seems to me kind of dead on arrival. I can’t even get into the hair-splitting about, ‘Oh, but there are three or four good ones.’ I just don’t see any life there.” How can such big productions filled with so much action play out so lifelessly on the screen?

12 bookstores every reader should visit in their lifetime Facebook.com/BrattleBookShopOutside of Boston's Brattle Book Shop. Are you someone who refuses to believe the theory that "print is dead"? Who always makes room in a suitcase for a paperback? Barack Obama's book recommendations: POTUS' reading list Whether he’s reading to kids at the White House, hitting up local bookstores on Black Friday, or giving recommendations to his daughters, President Barack Obama may as well be known as the Commander in Books. POTUS is an avid reader and recently spoke to the New York Times about the significant, informative and inspirational role literature has played in his presidency, crediting books for allowing him to “slow down and get perspective.” With his presidency coming to an end this Friday, EW looked back at Obama’s lit picks over the years — because it can’t hurt to read like a great leader. #ObamaForBookClubPresident2017, anyone? See a comprehensive list of every book Obama has recommended during his presidency:

The 10 Best Movies Influenced by The Philosophy of Jacques Derrida Jacques Derrida was a French philosopher, particularly well known for his analysis of the semiotics of western culture through the lens of deconstructionism. Derrida is well-known as one of the most formative figures in post-structuralist and postmodern thought, as well as one of the most innovative thinkers of the 20th and 21st centuries. Through his analytical framework of deconstruction, Derrida was able to form an attempt to decodify the nature of culture’s use of symbols; aphorisms, and practices to delve deeper into the underlying consciousness of society and by extension, the underlying consciousness of individuals. Derrida contributed significantly not just to our understanding of the philosophy of mind but also to our understanding of law; anthropology, gender studies, sociolinguistics (the way sociology influences the linguistic makeups of cultures), architecture, ontology, epistemology and many other forms of thinking and creative work. 10.