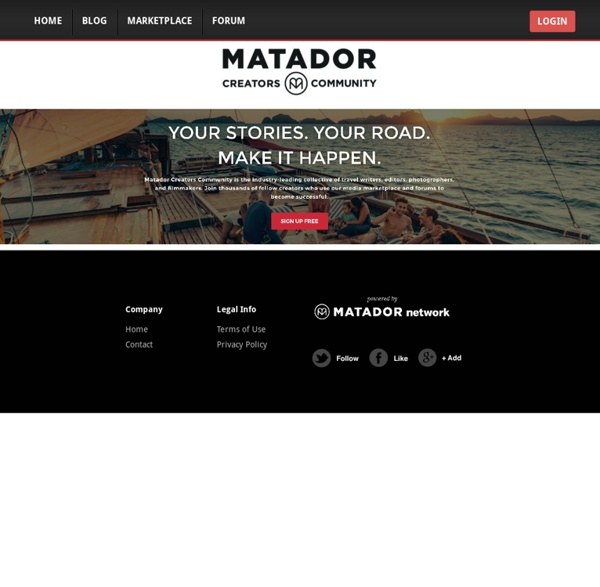 Matador is on a mission to create travel journalists. It hasn’t been easy, but passionate readers have joined us, making Matador the web’s largest travel magazine. We’ve also won two consecutive Lowell Thomas awards for travel journalism excellence, and developed new models for partnering with brands, host countries, and major outlets such as National Geographic,CNN, Business Insider, and Google. MatadorU is Matador Network’s online education community. Since launching in 2009, thousands of students have graduated from our programs. We hope you’ll join the MatadorU writers, photographers, and filmmakers winning awards, landing media jobs, and getting paid assignments around the world.

No More Fake News Logic and Faith in the context of Jon Rappoport's Logic and Analysis Course. By Jon Rappoport, Author of the LOGIC AND ANALYSIS COURSE qjrconsulting@gmail.com I’m approaching home-schooling parents with this course, because I believe a revolution in the education system should begin at home, with the family. Cognitive dysfunction (brain fog) (MPKB) Legacy content Joint Bone Spine. 2010 Jul;77(4):366-7. Epub 2010 May 15. Improvement of cognition, a potential benefit of anti-TNF therapy in elderly patients with rheumatoid arthritis. Chic in Morocco: Funky Old Medina I originally intended to post about my trip to Morocco in chronological order. The first oasis resort at which we stayed, while gorgeous, didn't seem like a true reflection of the country so I'm going to start with the medina in Essaouira. I will also be putting together a "chic travelers guide to Morocco" on what to pack, where to visit and what to expect. My Eyewitness Travel Guide was handy but left out a few key details that will hopefully help you plan an amazing trip to Morocco. The town of Essaouria is a walled harbor city located on the Atlantic coast. It was called Mogador meaning "the wall" by the Portuguese who created a trading and military base in the city in the 16th-century.

Donate and Volunteer at Panama's Three Top Childrens's Charities 27% of Panama's Population lives in Extreme Poverty - You Can Make a Difference by Supporting Panama's Three Top Children's Charities You can help the children and families of Panama's neediest citizens by donating to or volunteering at three of the best run charities anywhere. Panama City's modern skyline belies the fact that 27% of Panama's children live in extreme poverty, a majority of them members of Indian tribes living in jungles and mountains. This poverty has nothing to do with what we call "poverty" in the States or Europe. You've gotta follow these Instagrammers in the Middle East @zamaaan is an Instagram collection of vintage photographs from around the Middle East, crowd-sourced from people sending in old family snapshots. The photos sometimes date back a century, together creating a fascinating “passport to the past”. Pictured, we see Lebanese women in the 1920s pose dressed as men.

Is it an -ism or is it art ? CCK08 – In my student days in South Africa, a local hit song imprinted on those biochemical pathways in my brain that connect me through memory and music to 1984. Niki Daly’s “Is it an ism or is it art” didn’t really comment on the UDF, school boycotts, and the rising tide of resistance to apartheid – but it did make us arty types think more deeply about the relationship of artists to critics, the reification of artistic fads, and I suppose the album as whole did question the white dream of insulated existence in the larney suburbs…. The first 3 weeks of CCK08 evoked that song for me as I trawled through the blogs and lurked in the Moodle forums – skimming the posts, assimilating and accommodating, just immersing myself in the network in a passive kind of a way, feeling a tad guilty as I took precious time out of a busy RL day to follow some threads. Got a feel for it now and can hopefully start contributing back into the conversations.

Science behind Pathogenesis (MPKB) The Marshall Pathogenesis, upon which the Marshall Protocol is grounded, is a description for how bacteria interfere with the innate immune response. These pathogens survive and reproduce by disrupting the Vitamin D Nuclear Receptor, an evolutionarily consistent mechanism for survival, which leads to the development of chronic inflammatory diseases. Because these diseases are fundamentally bacterial in nature, the conditions are referred to as the “Th1 diseases.” The Marshall Pathogenesis is supported by an emerging array of evidence, including clinical evidence, evolutionary evidence, some in silico data, and environmental sampling studies.

Magnificent Moroccan Mosque After just one day in Morocco, I can see why so many designers and artists would be inspired by this beautiful country. Most flights land in Casablanca so we took time to visit the famous Hassan II Mosque before driving to the Mazagan Beach Resort. The patterns of the marble, tiles and metalwork could inspire me for years to come. Volunteering Projects in Panama The Projects Childrens Are you drawn to helping children in need? 10 well paid jobs of the future Mr Bellini posited the idea of an elderly well-being consultant, who specialises in personalised care for older patients, or a memory augmentation surgeon who helps counter memory loss. He also saw big changes in farming as food resources became scarce, with genetically modified crops becoming common and crops grown vertically in areas resembling multi-storey car parks to save space. Ian Pearson, a futurologist who wrote You Tomorrow, sees job growth in the field of augmented reality, where the real world is overlaid with computer-generated images.

"NextGen's New 'Required Skills' List" by Doug Ehrenkranz There is a new vocabulary of required skills working its way into many job descriptions over the last few years. These verbs, adverbs, and adjectives are increasingly being incorporated into the desired candidates “must-haves,” and these required skills have nothing to do one’s functional expertise, be it sales and marketing, accounting and finance, manufacturing and supply chain, and even human resources. Competency and experience in these areas are often making the difference between a selected candidate and one not selected for a position.