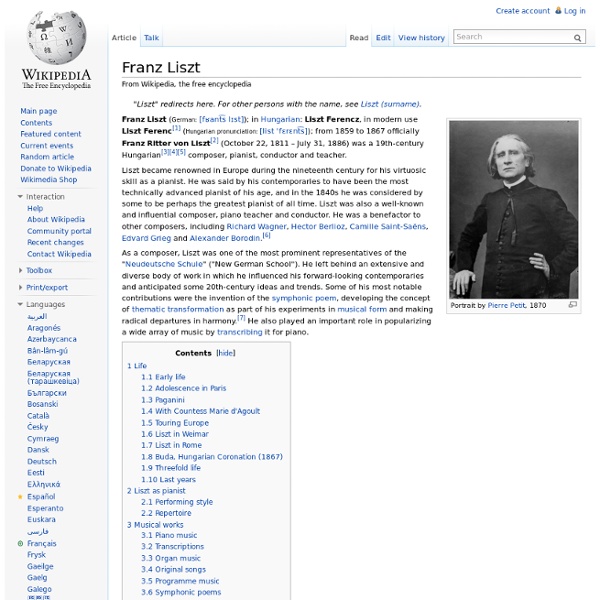 Franz Liszt, T.O.S.F. (German: [fʁant͡s lɪst]; Hungarian: Liszt Ferencz; October 22, 1811 – July 31, 1886), in modern use Liszt Ferenc[n 1] (Hungarian pronunciation: [list ˈfɛrɛnt͡s]); from 1859 to 1867 officially Franz Ritter von Liszt,[n 2] was a 19th-century Hungarian[1][2][3] composer, virtuoso pianist, conductor, teacher and Franciscan tertiary. Liszt gained renown in Europe during the early nineteenth century for his virtuosic skill as a pianist. Life[edit] Early life[edit] The earliest known ancestor of Liszt is his great-grandfather, Sebastian List who was one of the thousands of German migrant serfs locally migrating within the Austrian Empire's territories (around the area now constituting Lower Austria and Hungary) in the first half of the 18th century. Anna Liszt, née Maria Anna Lager (portrait by Julius Ludwig Sebbers between 1826 and 1837) In Vienna, Liszt received piano lessons from Carl Czerny, who in his own youth had been a student of Beethoven and Hummel. Paganini[edit]

Robert Schumann Robert Schumann[1] (8 June 1810 – 29 July 1856) was a German composer and influential music critic. He is widely regarded as one of the greatest composers of the Romantic era. Schumann left the study of law, intending to pursue a career as a virtuoso pianist. He had been assured by his teacher Friedrich Wieck that he could become the finest pianist in Europe, but a hand injury ended this dream. Schumann then focused his musical energies on composing. In 1840, against the wishes of her father, Schumann married Friedrich Wieck's daughter Clara, following a long and acrimonious legal battle, which found in favor of Clara and Robert. Schumann suffered from a lifelong mental disorder, first manifesting itself in 1833 as a severe melancholic depressive episode, which recurred several times alternating with phases of ‘exaltation’ and increasingly also delusional ideas of being poisoned or threatened with metallic items. Biography[edit] Early life[edit] Music room of Schumann 1830–34[edit] [edit]

Frédéric Chopin Photograph of Chopin by Bisson, c. 1849 Frédéric François Chopin (/ˈʃoʊpæn/; French pronunciation: ​[fʁe.de.ʁik ʃɔ.pɛ̃]; 22 February or 1 March 1810 – 17 October 1849), born Fryderyk Franciszek Chopin,[n 1] was a Romantic-era Polish composer. A child prodigy, Chopin was born in what was then the Duchy of Warsaw. He grew up in Warsaw, which after 1815 became part of Congress Poland, and there completed his musical education and composed many of his works before leaving Poland, aged 20, less than a month before the outbreak of the November 1830 Uprising. Both in his native Poland and beyond, Chopin's music, his status as one of music's earliest 'superstars', his association (if only indirect) with political insurrection, his amours and his early death have made him, in the public consciousness, a leading symbol of the Romantic era. Life[edit] Childhood[edit] Chopin's Polish residences Warsaw building where Chopin's family lived in 1817–27,[n 2] embellished with bas-relief of his profile

Felix Mendelssohn Portrait of Mendelssohn by the English miniaturist James Warren Childe (1778–1862), 1839 Jakob Ludwig Felix Mendelssohn Bartholdy (German: [ˈjaːkɔp ˈluːtvɪç ˈfeːlɪks ˈmɛndl̩szoːn baʁˈtɔldi]; 3 February 1809 – 4 November 1847), born and widely known as Felix Mendelssohn,[n 1] was a German composer, pianist, organist and conductor of the early Romantic period. A grandson of the philosopher Moses Mendelssohn, Felix Mendelssohn was born into a prominent Jewish family, although initially he was raised without religion and was later baptised as a Reformed Christian. Mendelssohn was recognised early as a musical prodigy, but his parents were cautious and did not seek to capitalise on his talent. Early success in Germany, where he also revived interest in the music of Johann Sebastian Bach, was followed by travel throughout Europe. Life[edit] Childhood[edit] Felix's surname[edit] Career[edit] Musical education[edit] Early maturity[edit] Meeting Goethe and conducting Bach[edit] Düsseldorf[edit]

Vincenzo Bellini Vincenzo Bellini Bellini's grave in the cathedral of Catania Known for his long-flowing melodic lines, for which he was named "the Swan of Catania", Bellini was the quintessential composer of bel canto opera; his work has been summed up by the London critic Tim Ashley as: ...also hugely influential, as much admired by other composers as he was by the public. He died in Puteaux, France at the age of 33, nine months after the premiere of his last opera, I Puritani. Life[edit] Musical education[edit] Born in Catania, at the time part of the Kingdom of Sicily, Bellini was a child prodigy from a highly musical family and legend has it he could sing an aria of Valentino Fioravanti at eighteen months. Having learned from his grandfather, Bellini left provincial Catania in June 1819 to study at the conservatory in Naples, with a stipend from the municipal government of Catania. It was the custom at the Conservatory to introduce a promising student to the public with a dramatic work. Works[edit] Notes

Giuseppe Verdi Biography[edit] Early life[edit] Verdi's statue in the Piazza G. Verdi, Busseto When he was still a child, Verdi's parents moved from Le Roncole to Busseto, where the future composer's education was greatly facilitated by visits to the large library belonging to the local Jesuit school. It was in Busseto that Verdi was given his first lessons in composition. Returning to Busseto, he became the town music master and gave his first public performance in 1830 in the home of Antonio Barezzi, a local merchant and music lover who had long supported Verdi's musical ambitions in Milan. Because he loved Verdi's music, Barezzi invited Verdi to be his daughter Margherita's music teacher, and the two soon fell deeply in love. Initial recognition[edit] Portrait of Margherita Barezzi, first wife of Giuseppe Verdi, in the La Scala Museum, Milan It was while he was working on his second opera, Un giorno di regno, that Verdi's wife died. Middle years[edit] Later compositions[edit] Verdi and Wagner never met.

Jacques Offenbach Offenbach in the 1860s Jacques Offenbach (20 June 1819 – 5 October 1880) was a German-born French composer, cellist and impresario of the romantic period. He is remembered for his nearly 100 operettas of the 1850s–1870s and his uncompleted opera The Tales of Hoffmann. Born in Cologne, the son of a synagogue cantor, Offenbach showed early musical talent. In 1858, Offenbach produced his first full-length operetta, Orphée aux enfers ("Orpheus in the Underworld"), which was exceptionally well received and has remained one of his most played works. Offenbach became associated with the Second French Empire of Napoleon III; the emperor and his court were genially satirised in many of Offenbach's operettas. Life and career[edit] Early years[edit] Offenbach in the 1840s Isaac had been given letters of introduction to the director of the Paris Conservatoire, Luigi Cherubini, but he needed all his eloquence to persuade Cherubini even to give Jacob an audition. Cello virtuoso[edit] Salle Choiseul[edit]