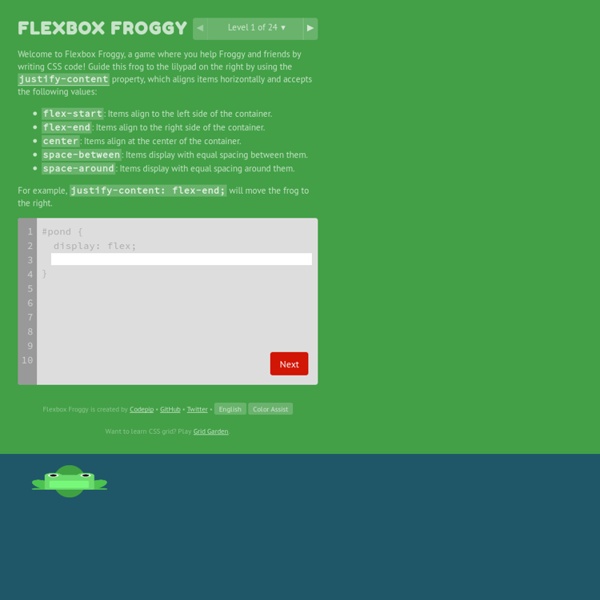 Normalizing Cross-browser Flexbox Bugs — Philip Walton Update: as a follow-up to this article, I’ve created the Github repo Flexbugs: a community curated list of cross-browser flexbox issues and their known workarounds. The goal is if you’re building a website using flexbox, and something isn’t working as you’d expect, you can find the solution there. Way back in September of 2013, while testing my Solved by Flexbox project, I discovered a bug in Internet Explorer 10 and 11 that was preventing my sticky footer from actually sticking to the bottom of the page. I spent some time trying to work around the issue, but all my attempts failed. At first I was really annoyed.

Less.js Compile .less files to .css using the command line Heads up! If the command line isn't your thing, learn more about GUIs for Less. Installing lessc for Use Globally arbor.js » reference about arbor Arbor is a graph visualization library built with web workers and jQuery. Rather than trying to be an all-encompassing framework, arbor provides an efficient, force-directed layout algorithm plus abstractions for graph organization and screen refresh handling. It leaves the actual screen-drawing to you. This means you can use it with canvas, SVG, or even positioned HTML elements; whatever display approach is appropriate for your project and your performance needs. As a result, the code you write with it can be focused on the things that make your project unique – the graph data and your visual style – rather than spending time on the physics math that makes the layouts possible.

Designer's guide to DPI DPI or Dots Per Inch is a measure of spatial dot density initially used in print. It's the number of ink drops your printer can put in an inch. The more dots per inch, the sharper your image. A Visual Guide to CSS3 Flexbox Properties ― Scotch The Flexbox Layout officially called CSS Flexible Box Layout Module is new layout module in CSS3 made to improve the items align, directions and order in the container even when they are with dynamic or even unknown size. The prime characteristic of the flex container is the ability to modify the width or height of its children to fill the available space in the best possible way on different screen sizes. Many designers and developers find this flexbox layout easier to use, as positioning of the elements is simpler thus more complex layouts can be achieved with less code, leading to simpler development process. Flexbox layout algorithm is direction based unlike the block or inline layout which are vertically and horizontally based. This flexbox layout should be used for small application components, while new CSS Grid Layout Module is emerging to handle the large scale layouts.

Take Command of CSS Flexbox - Responsive Tutorial with Bootstrap 4 As a kid I loved playing with toy plastic army men. I would line them up and pretend to be in command giving orders to my soldiers in order to defeat the enemy. Since I was in full command, the soldiers would look to me for their orders. Sometimes a hot shot recruit would overstep my orders and go rogue, He would ignore and override my orders and just do what he wanted. My example demonstrates the basic principle of the CSS display property flexbox which is… Bootstrap 4 alpha 19 Aug 2015 Today is a special day for Bootstrap. Not only is it our fourth birthday, but after a year of development, we’re finally shipping the first alpha release of Bootstrap 4.

Mobile MVC Apps With Framework7, RequireJS and Handlebars by Philip Shurpik This app shows you example of using beautiful mobile framework - Framework7 in MVC way for building data-driven contacts application. Let’s start. We will need additional javascript libraries: Handlebars - templating libraryRequireJS - for asynchronous javascript modules loadingAdditional RequireJS plugins for handlebars templates loading: Project structure: 10 Best tools and resources for web and design professionals in 2015 Tools and resources for web and design professionals are available in abundance these days, unfortunately, not all those available are as useful as we’d like them to be. In order to help you weed out some of the tools that aren’t worth your time, we’ve compiled a list of what we think are the best tools and resources available right now. 1. Stamplia If you’re looking for a place to sell your email templates, then you’re looking for Stamplia. This marketplace has been around since 2013 and it has gathered more than 6000 members.

Solved by Flexbox — Cleaner, hack-free CSS All of the code samples on this site show how to solve a particular design problem with Flexbox. They show just the code that's needed to make the demos work in a spec-compliant browser. Some browsers do not fully comply with the latest version of the spec, so sadly, a few workarounds were necessary. Workarounds for non-compliant browsers are not shown in the code samples, but if you're curious about those implementation details, you can check out the source files.