25 Websites To Have Fun With Your Photos 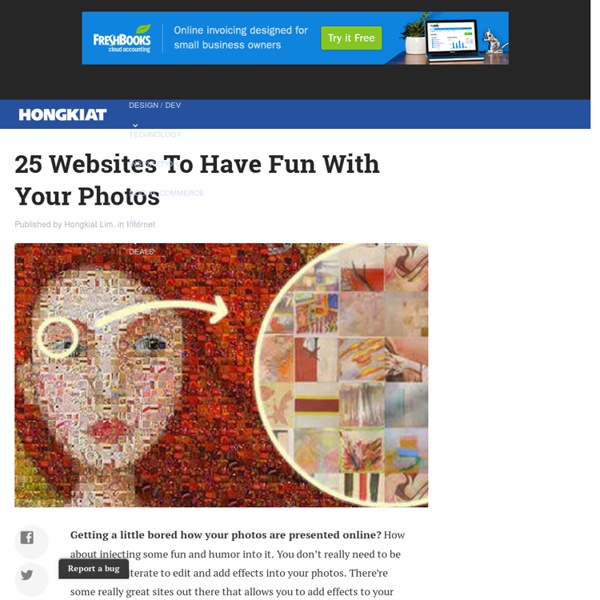 Getting a little bored how your photos are presented online? How about injecting some fun and humor into it. You don’t really need to be Photoshop literate to edit and add effects into your photos. There’re some really great sites out there that allows you to add effects to your photo by using their existing effect-templates. The best part is – most of them are free and output is shown immediately on the fly. Here’s a collection of 25 Sites To Have Fun With Your Photoswe’ve come to know. We’ll start with 10 of our favorites, followed by the rest. Our Top 10 Picks PhotoFunia One of the hottest site with tons of creative backgrounds to play around with. Fun Photo Box If you don’t get what you want from PhotoFunia, you reallly need to check out this site. Picartia Create a photo mosaic of your choice for free online. Hairmixer Choose a photo for the left and right side and start mixing their hairs up. Photo505 We’d say, with Photo505, Photofunia and Fun Photo Box, you’ll be buzy for days. Loonapic

28 Online Photo Editing Websites To have Fun With Maybe you want to be on a magazine cover, want your own personalized dollar or maybe just want to change your expression? Now you can do it with just few mouse clicks and in just few seconds. We’ve collected all of the best free photo editing services, which will keep you busy for quite a while and you will receive amazing results – maybe funny, maybe silly – but you’ll get the original photos and few more reasons to smile.

Clever and Creative Bus Advertising Creative uses of buses in advertising campaigns by various companies. Keep Holland Clean Bus Advertisement Don’t turn the bus into a garbage truck. It’s just as easy to throw your trash in the waste bin. [link] 99 Extreme Examples of Bokeh Photography The quality of the blur has come to be known as “bokeh”. Bokeh in terms of photography referring the area in the photo which are out of focus light to increase beautiful and dramatic image. The origin of the term is from the Japanese word “romaji” (english characters) is spelled “boke” (pronounced bo-keh) and which means “fuzzy”. For good Bokeh, ideally points and lines would blur smoothly as they fell out of focus, in the manner, for example, of a smooth Gaussian blurring. When it comes to inspiration then there is no limitation on resources. Photography is one of the key sources of inspiration for some of our past work.

70 Free Useful Portable Applications You Should Know Editor’s note: This post has been updated. More apps are added and error links are fixed. Portable apps are the software requiring no installation unlike usual executable apps yet recall your history and configuration options unlike zipped apps. In this post, we’re showcasing the top 100 useful portable apps that you can carry in a pen drive or your phone’s storage or SD card. Portable apps for Windows platform lets you carry your favorite apps along with you on the go – with all the data and settings, ready to be launched at a click on any computer running Windows XP or above. Interactive My Plate Tool- Free Interactive Nutrition Tools For Parents-USDA My Plate Healthy Messages On this page:USDA My Plate Parents- Interactive USDA My Plate Balanced Meal Messages Use your mouse to scroll over parts of My Plate. USDA My Plate

Performance Comparison of Major Web Browsers The latest versions of the five major most web browsers (Mozilla Firefox 3.5, Google Chrome 3.0, Microsoft Internet Explorer 8.0, Opera 10.0, and Apple Safari 4.0) went head to head under six performance indicators: JavaScript speed, average CPU usage under stress, DOM selection, CSS rendering speed, page load time, and browser cache performance. Each web browser was tested three times under an unprimed cache (except for the browser cache performance), and their average value reported in the results. Click to enlarge: Download the Data If you’d like to download the raw data, you can grab them as a CSV below. Kirsch Kirschwasser, produced in Germany and bottled at 40% ABV. A kirschwasser (/ˈkɪərʃvɑːsər/ KEERSH-vahs-ər; German: [ˈkɪɐ̯ʃvasɐ], German for “cherry water”) or kirsch is a clear, colorless fruit brandy traditionally made from double distillation of morello cherries, a dark-colored cultivar of the sour cherry. However, it is now also made from other kinds of cherries.

The Top 100 Twitter Publishing Tools and Services inShare0 Source As I was writing the report on Facebook and Twitter traffic growth, I had noticed that the engagement time at Twitter.com had dropped by 31 percent year-over-year. September 2009: 18:07 September 2008: 26:12 Deep Time : A History of the Earth - Interactive Infographic Life on the planet started astonishingly early. The first living organisms, in the current model of evolution, are thought to be Prokaryotes1. The oldest known fossilised prokaryotes have been dated to approximately 3.5 billion years ago, only 1 billion years after the formation of the Earth's crust. Eukaryotes2 are more advanced organisms with complex cell structures, each of which contains a nucleus.

iPhoney Looking for a way to see how your web creations will look on iPhone? Look no further. iPhoney gives you a pixel-accurate web browsing environment—powered by Safari—that you can use when developing web sites for iPhone. It's the perfect 320 by 480-pixel canvas for your iPhone development. And it's free.