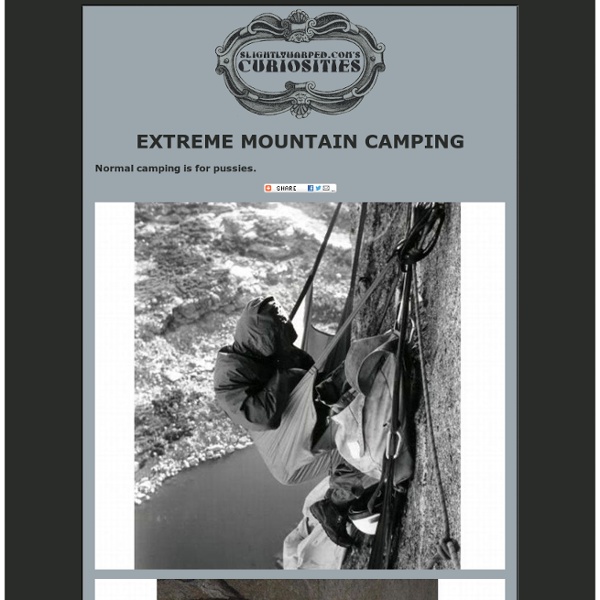 Normal camping is for pussies.

Mark Twain&s Top 9 Tips for Living a Kick-Ass Life “It’s no wonder that truth is stranger than fiction. Fiction has to make sense.” “Let us live so that when we come to die even the undertaker will be sorry.” “When your friends begin to flatter you on how young you look, it’s a sure sign you’re getting old.” You may know Mark Twain for some of his very popular books like Adventures of Huckleberry Finn and The Adventures of Tom Sawyer. He was a writer and also a humorist, satirist and lecturer. Twain is known for his many – and often funny – quotes. 1. “A man cannot be comfortable without his own approval.” If you don’t approve of yourself, of your behaviour and actions then you’ll probably walk around most of the day with a sort of uncomfortable feeling. This can, in a related way, be a big obstacle in personal growth. What you may be bumping into there are success barriers. Or if you make some headway in the direction you want to go you may start to sabotage for yourself. 2. “Age is an issue of mind over matter. 3. 4. 5. 6. And that’s OK.

Take a virtual ride down a mountainside on the world's scariest 'rollercoaster' By Daily Mail Reporter Updated: 09:51 GMT, 24 November 2011 For some people the mere thought of skiing down a mountain is off-putting enough. But this Austrian alpine-coaster offers what is perhaps the most frighteningly fast - and seemingly dangerous - downhill descent there is. The single-pipe ride, which is located in Mieders, usually provides tourists with a slow, open trek down the mountainside. But one hardy adventurer recorded video footage of himself hurtling down the steep incline without applying the brakes. The result is a terrifying downhill plunge in small, open-topped car that appears to teeter on the edge of flying off the rail as it rounds tight bends. Earlier this year, the world's steepest roller coaster opened in the shadow of Mount Fuji in Japan. Brave riders on the Takabisha plummet 141ft in a single vertical drop Fuji-Q Highland Amusement Park. More stately pace: The single-pipe ride usually provides tourists with a slow, open trek down the mountainside

Actors in Character - Now That is Acting! Feb 21, 2011 / Category : Movies / 18 Comments There's no denying the fact that most of us have pretended to be actors. Photographer Howard Schatz, from Vanity Fair, took this idea one step further, place actors in a series of roles and dramatic situations to reveal the essence of their characters. Left: You're a priest in a hardscrabble factory-town parish, listening to your brother's son confess that he has killed a man. Center: You're a gangsta rapper being informed by a haughty bouncer that you are not on the list. Left: You're a father teaching his daughter to ride a bike, watching as she takes a header on her first solo try. Left: You're a factory foreman with $200 riding on the game, watching your team's placekicker muff a 23-yarder with 0:01 remaining. Left: You're the office toady, having a dutiful laugh over your boss's latest racist jokeand all too aware that everyone else at work hates you. Left: You're a man whose daughter has been missing for two months.