The 100 best photographs ever taken without photoshop 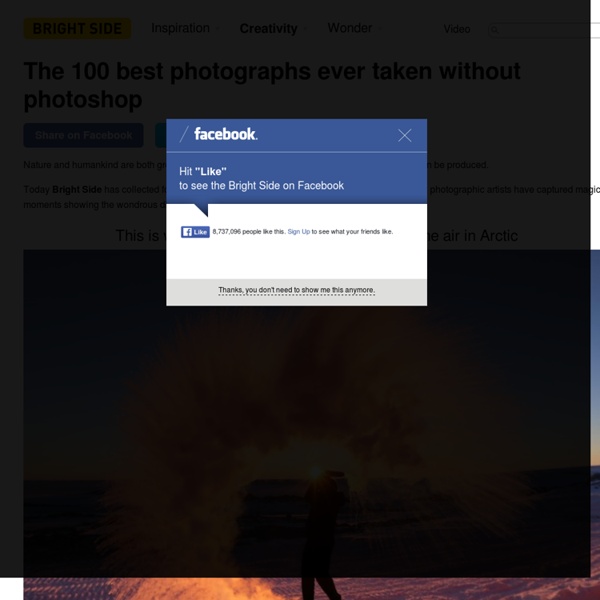 Nature and humankind are both great artists, and when they join forces, amazing masterpieces can be produced. Today Bright Side has collected for you works in which the combined efforts of mother nature and photographic artists have captured magic moments showing the wondrous diversity of modern life and the natural world. This is what happens if you throw hot tea into the air in Arctic imgur A galactic tennis ball © Abhijeet Kumar Modern dykes, windmills and highways in the Netherlands imgur A temple covered in ash from the Ontake volcanic eruption, Japan media.jrn Two worlds divided, New York, USA imgur The Supermoon in a radio telescope imgur Just an ordinary day’s building — catching a cloud © trynidada Celebrating the 100th anniversary of the birth of Kim Il-sung, North Korea’s founder ©Ilya Pitalev A blue universe in Japan © Hiroki Kondu / National Geographic Spider webs in Abernethy forest, Scotland © Mark Hamblin Now I can finally get a tan © Gray Malin Volcanic eruption in Iceland © Fred Johns AirPano

It is sometimes said that in the eternal confrontation between man and nature, there is no winner. However, once there is a crack in a building, or a broken car stays unattended for a certain amount of time, we’ve all seen how vegetation immediately starts to seize control of it. Nature reasserts its grip. Take a walk through the abandoned tunnels, ships, mansions and 20 other objects, which, though they were created by man, soon became part of the natural landscape. These are some thought-provoking images. Sometimes, you see a photograph which summons a whole storm of emotions inside. Often this is down to a perfectly chosen angle or a shot taken at just the right moment. Sometimes, it’s a shot of a stunning landscape or an awe-inspiring natural phenomenon. But in other cases, it can be something as simple as the chronicling of our everyday lives from all around the world. Here, we’ve gathered together 20 of the most brilliant photographs we’ve seen this year. Some are amusing, some exciting, and others simply wonderful.

Maps of the world that we saw during our childhood, especially those that we were shown to us in school, were hugely influential in shaping our understanding of what the planet looks like. But of us ever realise that what we think of as the ’standard’ map of the Earth looks very strange to millions of people from different countries — because, it turns out, many of them have their own, different versions. This is important because many of us subconsciously base our understanding of how the world works on the map we grew up with. We begin to believe that the countries which play a dominant role in the world are the ones placed in the centre of the map, and those which play subordinate roles are on the periphery. Here are seven fascinating maps used in different countries around the globe, which show just how different people’s perceptions can be depending on the culture they grew up in. The world map, as seen from...Russia

Ostensibly Ordinary: Pyongyang - Photography - M1key - Michal Huniewicz This is my second gallery from North Korea. The first one was the Road to North Korea, describing my way in. If you liked this gallery, you can follow me on Twitter or Facebook, much appreciated. Sources: 1, 2, 3, 4, 5, 6, 7, 8, 9.

In many countries, winter is truly a wonder to behold. It can make virtually any landscape unrecognisable. It’s for this reason that winter is a cherished subject for photographers. Despite their freezing fingers, those with an eye for capturing this season in all it’s pristine beauty continue to take amazing shots year after year. Road to North Korea - Photography - M1key - Michal Huniewicz No. 1* These are the photos from my trip to North Korea - quite possibly the most mysterious and weird country on the planet. This gallery will focus on getting into the country, and then there will be a few more following. The Koreans are one nation, but not unlike Germany, the country was divided between the USSR and the US following World War 2. The politics of the Cold War meant that North Korea (like East Germany) would become a Soviet playground and a communist state, while South Korea had the US telling it what to do, and it became a capitalist democracy. [1] If you liked this gallery, you can follow me on Twitter or Facebook, much appreciated.

A photo will stand out from the millions of others taken ever day often because it’s been taken at precisely the right moment. It could be the very second a fork of lightning flashes down from the night sky, a fish falling into the mouth of a bird, or the shadow of the clouds falling across the ground. If you’re in the right place at the right time, you could snap something which is a million times more impressive than even the best professional photographer. Cinematic Photographs of Tokyo at Night by Masashi Wakui All photos © Masashi Wakui Tokyo is an infinitely photogenic city. And there’s no shortage of photographers capturing its vibrant landscape. But local resident and photography aficionado Masashi Wakui has a unique, surreal style of capturing Tokyo by night and making it look like an animated still from Akira or a Ghibli film.