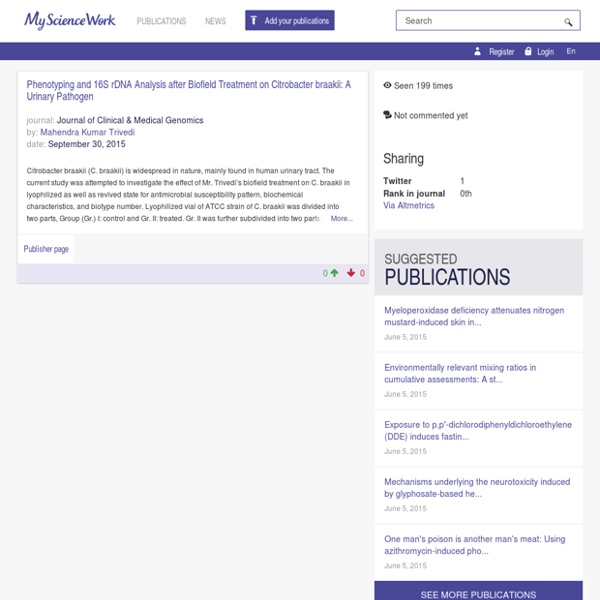 "Phenotyping and 16S rDNA Analysis after Biofield Treatment on Citrobac" by Mahendra Kumar Trivedi Description Citrobacter braakii (C. braakii) is widespread in nature, mainly found in human urinary tract. The current study was attempted to investigate the effect of Mr.

The Science Behind The Trivedi Effect® Atoms exist in all states of matter. Even the cells of microbes, plants, human beings and all other living / non-living things consist entirely of atoms in the form of complex molecules. Atoms, at the most elementary level, are made from electrons, protons, neutrons and several known and unknown subatomic particles. Physicists and chemists hypothesize several theories to explain the systematic and disciplinary existence of various species inside the atom, the nature of bonds between atoms in condensed states (such as solids and liquids), as well as for the way the particles are working inside the atom. There have been several attempts to develop a unified picture that links the macroscopic universe and the microscopic atomic and subatomic world.

Impact of Biofield Treatment on Characteristics of Magnesium Abstract Magnesium (Mg), present in every cell of all living organisms, is an essential nutrient and primarily responsible for catalytic reaction of over 300 enzymes. The aim of present study was to evaluate the effect of biofield treatment on atomic and physical properties of magnesium powder. Magnesium powder was divided into two parts denoted as control and treatment. Control part was remained as untreated and treatment part received biofield treatment. Both control and treated magnesium samples were characterized using X-ray diffraction (XRD), surface area and particle size analyzer.

Impact of Biofield Treatment on Enterobacter Aerogenes Abstract: Enterobacter aerogenes (E. aerogenes) has been reported as the versatile opportunistic pathogen associated with the hospital infections worldwide. The aim of the study was to determine the impact of Mr. Trivedi’s biofield energy treatment on multidrug resistant clinical lab isolates (LSs) of E. aerogenes.