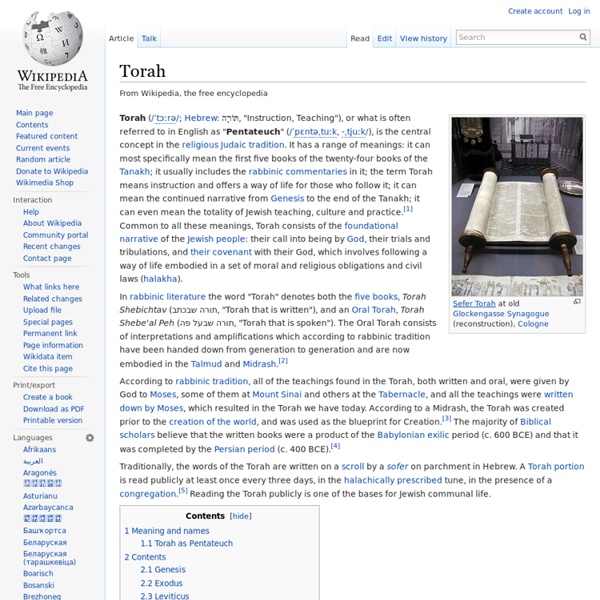 Torah (/ˈtɔːrə/; Hebrew: תּוֹרָה, "Instruction, Teaching"), or what is often referred to in English as "Pentateuch" (/ˈpɛntəˌtuːk, -ˌtjuːk/), is the central concept in the religious Judaic tradition. It has a range of meanings: it can most specifically mean the first five books of the twenty-four books of the Tanakh; it usually includes the rabbinic commentaries in it; the term Torah means instruction and offers a way of life for those who follow it; it can mean the continued narrative from Genesis to the end of the Tanakh; it can even mean the totality of Jewish teaching, culture and practice.[1] Common to all these meanings, Torah consists of the foundational narrative of the Jewish people: their call into being by God, their trials and tribulations, and their covenant with their God, which involves following a way of life embodied in a set of moral and religious obligations and civil laws (halakha). Meaning and names[edit] Torah as Pentateuch[edit] Contents[edit] Genesis[edit] Related:  belief • Religion and Skepticism

User:Lilitu In some kabbalistic texts, Lilith is a female demon, a succubus, who may have been Adam's first wife, before Eve. Because she would not accept subordination, she has become a symbol to many feminists, especially some Jewish women's groups. "Lilith" by John Collier, The Atkinson Gallery, Southport, England Lilith in World myths[edit] The original name in Sumerian was "Lilitu", and the transliteration from the Hebrew may be as "Lilith," "Lillith," or "Lilit". Hieronymus associated Lilith with the mythical Greek Lamia, a Libyan queen who mated with Zeus. Lilith in the Bible and other ancient texts[edit] Lilith's name only appears once in the Old Testament at Isaiah 34:14-15, where it is translated as "great owl" in the King James Version of the Bible, leading to Lilith often being portrayed in imagery as an owl (this interpretation has been disputed). Lilith as Adam's first wife[edit] Reference[edit] Hypertext King James Version of the Bible, Book of Genesis External links[edit]

Abijah Russian name[edit] The variant used in the Russian language is "А́вия" (Aviya),[1] with "А́бия"[1] or "Аби́я" (Abiya),[2] being older forms.[1] Included into various, often handwritten, church calendars throughout the 17th–19th centuries, it was omitted from the official Synodal Menologium at the end of the 19th century.[3] In 1924–1930, the name (as "Ави́я", a form of "Abiya"[2]) was included into various Soviet calendars,[3] which included the new and often artificially created names promoting the new Soviet realities and encouraging the break with the tradition of using the names in the Synodal Menologia.[4] In Russian it is only used as a female name.[1][2] Diminutives of this name include "А́ва" (Ava) and "Ви́я" (Viya).[1] Old Testament characters[edit] Women[edit] Men[edit] References[edit] Notes[edit] Sources[edit]

Blood libel False claim that Jews killed Christians to use blood in ceremonies Blood libel or ritual murder libel (also blood accusation)[1][2] is an antisemitic canard[3][4][5] accusing Jews of murdering Christian children in order to use their blood as part of religious rituals.[1][2][6] Historically, these claims—alongside those of well poisoning and host desecration—have been a major theme of the persecution of Jews in Europe.[4] Blood libels typically claim that Jews require human blood for the baking of matzos for Passover, although this element was allegedly absent in the earliest cases which claimed that then-contemporary Jews reenacted the crucifixion. The accusations often assert that the blood of the children of Christians is especially coveted, and, historically, blood libel claims have been made in order to account for the otherwise unexplained deaths of children. In some cases, the alleged victim of human sacrifice has become venerated as a Christian martyr. History[edit] See also[edit]

Nevi'im Nevi'im[pronunciation?] (Hebrew: נְבִיאִים Nəḇî'îm‎, "Prophets") is the second main division of the Hebrew Bible (the Tanakh), between the Torah (instruction) and Ketuvim (writings). It contains two sub-groups, the Former Prophets (Nevi'im Rishonim נביאים ראשונים, the narrative books of Joshua, Judges, Samuel and Kings) and the Latter Prophets (Nevi'im Aharonim נביאים אחרונים, the books of Isaiah, Jeremiah and Ezekiel and the Twelve Minor Prophets). Many of the writings of the Latter Prophets are thought by scholars to be older than the narratives of the Former Prophets which precede them in the canon, and were profoundly influential on the direction and development of Hebrew religion. The Latter Prophets have also had a wide influence on literature and on political and social activism in cultures outside of Judaism. Synopsis[edit] In Judaism, Samuel and Kings are each counted as one book. Former Prophets[edit] Joshua[edit] The book essentially consists of three parts: Judges[edit]

Seven Heavens Seven Heavens is a part of religious cosmology found in many major religions such as Islam, Judaism, Hinduism and Catholicism and in some minor religions such as Hermeticism and Gnosticism. The Throne of God is said to be above the seventh heaven in Abrahamic religions. Judaism[edit] According to the Talmud, the universe is made of seven heavens (Shamayim):[1][2] The Jewish Merkavah and Heichalot literature was devoted to discussing the details of these heavens, sometimes in connection with traditions relating to Enoch, such as the Third Book of Enoch.[3] Hinduism[edit] Hinduism also has the concept of seven heavens (Svarga). According to the Puranas and the Atharvaveda there are fourteen worlds. Islam[edit] The word "heaven" is used in the English translation of the Arabic word سماء (Samaa'a). The Qur'an frequently mentions the existence of seven (Samaawat), or heavens Seven-level underworlds[edit] See also[edit] Notes[edit] References[edit] Davidson, Gustav. External links[edit]

Second Temple Model of Herod's Temple (a renovation of the Second Temple) in the Israel Museum. It is unknown what the Second Temple looked like before this major renovation. The Second Temple was an important Jewish Holy Temple (Hebrew: בֵּית־הַמִּקְדָּשׁ הַשֵּׁנִי‎, Bet HaMikdash HaSheni; Arabic: بيت القدس‎: Beit al-Quds) which stood on the Temple Mount in Jerusalem during the Second Temple period, between 516 BCE and 70 CE. It replaced the First Temple which was destroyed in 586 BCE, when the Jews of the Kingdom of Judah went to exile, known as Babylonian Captivity. History[edit] Flavius Josephus records that Herod the Great completely rebuilt the Temple in 20-18 BCE, even going so far as to replace the foundation stones and to smooth off the surface of the Temple Mount. The Romans destroyed Jerusalem and its Temple in 70 CE under Titus, decisively ending the Great Jewish Revolt that had begun four years earlier. Rebuilding the Temple[edit] Rededication by the Maccabees[edit] Herod's Temple[edit] Mt.

Antichrist The Antichrist is a Christian concept based on interpretation of passages in the New Testament, in which the term "antichrist" occurs five times in 1 John and 2 John, once in plural form [1] and four times in the singular. [2] Etymology[edit] Christian views[edit] New Testament[edit] Whether the New Testament contains an individual Antichrist or not is disputed. The five uses of the term "antichrist" or "antichrists" in the Epistles of John do not clearly present a single latter-day individual Antichrist. Children, it is the last hour! Many deceivers have gone out into the world, those who do not confess that Jesus Christ has come in the flesh; any such person is the deceiver and the antichrist! Who is the liar but the one who denies that Jesus is the Christ? By this you know the Spirit of God: every spirit that confesses that Jesus Christ has come in the flesh is from God, and every spirit that does not confess Jesus is not from God. Early Church[edit] Post-Nicene Christianity[edit]

Ketuvim Ketuvim[pronunciation?] (in Biblical Hebrew: כְּתוּבִים Kəṯûḇîm, "writings") is the third and final section of the Tanakh (Hebrew Bible), after Torah (instruction) and Nevi'im (prophets). In English translations of the Hebrew Bible, this section is usually entitled "Writings" or "Hagiographa".[1] The Ketuvim are believed to have been written under the Ruach HaKodesh, but with one level less authority than that of prophecy.[2] Found among the Writings within the Hebrew scriptures, I and II Chronicles form one book, along with Ezra and Nehemiah which form a single unit entitled "Ezra–Nehemiah".[3] (In citations by chapter and verse numbers, however, the Hebrew equivalents of "Nehemiah", "I Chronicles" and "II Chronicles" are used, as the system of chapter division was imported from Christian usage.) Groups of books[edit] The poetic books[edit] The five scrolls (Hamesh Megillot)[edit] Other books[edit] Order of the books[edit] The Three Poetic Books (Sifrei Emet) Other Books Canonization[edit]

THE QLIPHOTHIC TREE OF TRANSFORMATION PART 1: PRESERVING THE NECRONOMICON TRADITION | Papers in the Attic I thought that it would be a good time to review one of the rarer subjects covered in the occult world, The Qliphotic Tree of Death (Transformation). Many of our articles here have given some information on the Qliphotic Tree in the past, but I thought it would be good to make this a separate chapter in the Necronomicon Tradition, as there is little information about the Qliphotic Tree is print. So let us begin this next Chapter of our discussion by defining the term Qlipoth. Interestingly, the term Qliphoth, kliffoth, or klippot, is derived from the Hebrew term qelippot, meaning “peels”, “shells” or matter. The qliphoth in Kabbalah are thought of as the opposites to the sephiroth (singular sephirah). The ten sephiroth are thought to be ten divine “enumerations” or “emanations” of God into the universe. The Kabbalah by Alexander S. “The first mention of the Tree of Life in the Scriptures is in Genesis 3:22 (Masoretic Text). “Kabalah (Heb.)

Saul The oldest accounts of Saul's life and reign are found in the Books of Samuel in the Hebrew Bible. A similar, yet different account is given in the Qur'an. The historicity of Saul's kingdom has been called into question by some historians.[1] Biblical account[edit] House of King Saul[edit] Saul also had a concubine named Rizpah, daughter of Aiah, who bore him two sons, Armoni and Mephibosheth. (2 Samuel 21:8) Saul offered Merab to David as a wife after his victory over Goliath, but David was not interested in the arrangement. (1 Samuel 18:17-19) Saul then gave his other daughter Michal in marriage to David, (1 Samuel 18:20-27) but when David became Saul's rival to the kingship, Saul gave Michal in marriage to Palti, son of Laish. (1 Samuel 25:44) Armoni and Mephibosheth (Saul's sons with his concubine, Rizpah) were given by David along with the five sons of Merab (Saul's daughter)[4] to the Gibeonites, who killed them. (2 Samuel 21:8-9) Michal was childless. (2 Samuel 6:23) Rejection[edit]