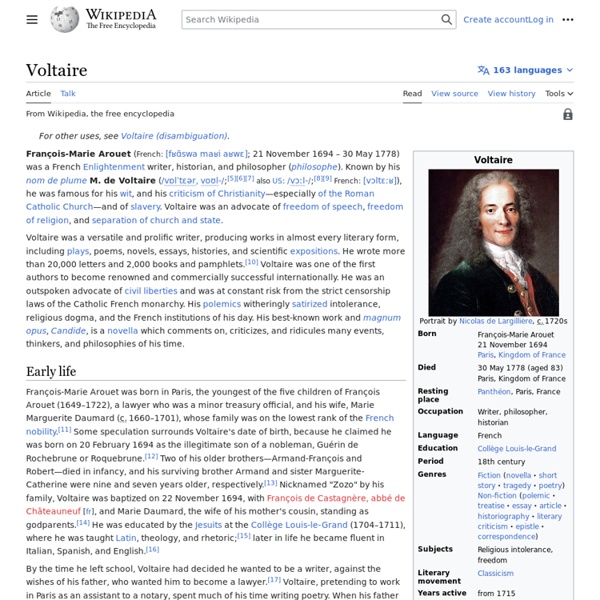 French writer, historian and philosopher François-Marie Arouet (French: [fʁɑ̃swa maʁi aʁwɛ]; 21 November 1694 – 30 May 1778), known by his nom de plume Voltaire (;[5][6][7] also ,[8][9] French: [vɔltɛːʁ]), was a French Enlightenment writer, historian, and philosopher famous for his wit, his criticism of Christianity—especially the Roman Catholic Church—as well as his advocacy of freedom of speech, freedom of religion, and separation of church and state. Biography François-Marie Arouet was born in Paris, the youngest of the five children of François Arouet (1649–1722), a lawyer who was a minor treasury official, and his wife, Marie Marguerite Daumard (c. 1660–1701), whose family was on the lowest rank of the French nobility. By the time he left school, Voltaire had decided he wanted to be a writer, against the wishes of his father, who wanted him to become a lawyer. Voltaire was imprisoned in the Bastille from 16 May 1717 to 15 April 1718 in a windowless cell with ten-foot-thick walls. Name Related:  -

Joseph Priestley English theologian, chemist, educator, and political theorist Joseph Priestley FRS (;[4] 24 March [O.S. 13 March] 1733 – 6 February 1804) was an 18th-century English Separatist theologian, natural philosopher, chemist, innovative grammarian, multi-subject educator, and liberal political theorist who published over 150 works. He has historically been credited with the discovery of oxygen,[5] having isolated it in its gaseous state, although Carl Wilhelm Scheele and Antoine Lavoisier also have strong claims to the discovery.[6] During his lifetime, Priestley's considerable scientific reputation rested on his invention of soda water, his writings on electricity, and his discovery of several "airs" (gases), the most famous being what Priestley dubbed "dephlogisticated air" (oxygen). However, Priestley's determination to defend phlogiston theory and to reject what would become the chemical revolution eventually left him isolated within the scientific community. Daventry Academy[edit] ...

Montesquieu French social commentator and political thinker Charles-Louis de Secondat, Baron de La Brède et de Montesquieu (;[2] French: [mɔ̃tɛskjø]; 18 January 1689 – 10 February 1755), generally referred to as simply Montesquieu, was a French judge, man of letters, and political philosopher. He is the principal source of the theory of separation of powers, which is implemented in many constitutions throughout the world. He is also known for doing more than any other author to secure the place of the word "despotism" in the political lexicon.[3] His anonymously-published The Spirit of Law in 1748, which was received well in both Great Britain and the American colonies, influenced the Founding Fathers in drafting the United States Constitution. Biography Montesquieu was born at the Château de la Brède in southwest France, 25 kilometres (16 mi) south of Bordeaux.[4] His father, Jacques de Secondat, was a soldier with a long noble ancestry. Lettres familières à divers amis d'Italie, 1767 Political views

Baruch Spinoza 17th century philosopher Baruch (de) Spinoza (;[14][15] Dutch: [baːˈrux spɪˈnoːzaː]; Portuguese: [ðɨ ʃpiˈnɔzɐ]; born Baruch Espinosa; later as an author and a correspondent Benedictus de Spinoza, anglicized to Benedict de Spinoza; 24 November 1632 – 21 February 1677[17][18][19][20]) was a Dutch philosopher of Portuguese Sephardi origin.[12][21][22] One of the early thinkers of the Enlightenment[23] and modern biblical criticism,[24] including modern conceptions of the self and the universe,[25] he came to be considered one of the great rationalists of 17th-century philosophy. Inspired by the groundbreaking ideas of René Descartes, Spinoza became a leading philosophical figure of the Dutch Golden Age. Spinoza's given name, which means "Blessed", varies among different languages. In Hebrew, his full name is written ברוך שפינוזה‎. In the Netherlands he used the Portuguese name Bento. Biography[edit] Family and community origins[edit] 17th-century Netherlands[edit] Early life[edit] Death[edit]

Frederick the Great King of Prussia, 1740–1786 Frederick II (German: Friedrich II.; 24 January 1712 – 17 August 1786) was a Prussian king and military leader who ruled the Kingdom of Prussia from 1740 until 1786, the longest reign of any Hohenzollern king at 46 years.[a] His most significant accomplishments during his reign included his reorganization of Prussian armies, his military successes in the Silesian wars and the Partitions of Poland, and his patronage of the arts and the Enlightenment. Frederick was the last Hohenzollern monarch titled King in Prussia and declared himself King of Prussia after annexing vital parts of the Polish-Lithuanian Commonwealth in 1772. Prussia greatly increased its territories and became a leading military power in Europe under his rule. Considering himself "the first servant of the state",[2] Frederick was a proponent of enlightened absolutism. Youth[edit] Frederick was brought up by Huguenot governesses and tutors and learned French and German simultaneously. Reign[edit]

Archimedes | Facts & Biography His life Archimedes probably spent some time in Egypt early in his career, but he resided for most of his life in Syracuse, the principal Greek city-state in Sicily, where he was on intimate terms with its king, Hieron II. Archimedes published his works in the form of correspondence with the principal mathematicians of his time, including the Alexandrian scholars Conon of Samos and Eratosthenes of Cyrene. He played an important role in the defense of Syracuse against the siege laid by the Romans in 213 bce by constructing war machines so effective that they long delayed the capture of the city. When Syracuse eventually fell to the Roman general Marcus Claudius Marcellus in the autumn of 212 or spring of 211 bce, Archimedes was killed in the sack of the city. Far more details survive about the life of Archimedes than about any other ancient scientist, but they are largely anecdotal, reflecting the impression that his mechanical genius made on the popular imagination. His works

Second Catilinarian conspiracy Composition of the conspiracy[edit] Promoting his policy of debt relief, Catiline initially also rallied many of the poor to his banner along with a large portion of Sulla’s veterans.[5] Debt had never been greater than in 63 BC since the previous decades of war had led to an era of economic downturn across the Italian countryside.[6] Numerous plebeian farmers lost their farms and were forced to move to the city, where they swelled the numbers of the urban poor.[7] Sulla's veterans were in bad economic straits as well. Desiring to regain their fortunes, they were prepared to march to war under the banner of the "next" Sulla. Thus, many of the plebs eagerly flocked to Catiline and supported him in the hope of the absolution of their debts. Course of the conspiracy[edit] Catiline sent Gaius Manlius, a centurion from Sulla’s old army, to manage the conspiracy in Etruria where he assembled an army. While Catiline was preparing the army, the conspirators continued with their plans. [edit]

Joseph Johnson Joseph Johnson may refer to: Entertainment[edit] Joseph McMillan Johnson (1912–1990), American film art directorSmokey Johnson (1936–2015), New Orleans jazz musicianN.O. Joe (Joseph Johnson, born 1975), musician, producer and songwriter Politics[edit] Religion[edit] Others[edit] See also[edit] Napoleon Imperial Standard of Napoleon I Napoléon Bonaparte (/nəˈpoʊliən, -ˈpoʊljən/;[2] French: [napɔleɔ̃ bɔnapaʁt], born Napoleone di Buonaparte; 15 August 1769 – 5 May 1821) was a French military and political leader who rose to prominence during the latter stages of the French Revolution and its associated wars. As Napoleon I, he was Emperor of the French from 1804 to 1814 and again in 1815. Napoleon was born in Corsica to a relatively modest family of noble Italian ancestry that had settled on the island in the 16th century. Napoleon took power in 1799 and installed himself as First Consul with few restrictions on his control of France. To enforce the Continental blockade, he launched a large-scale invasion of Russia in 1812 that proved to be a major military failure. Origins and education Napoleon was born on 15 August 1769 to Carlo Maria di Buonaparte and Maria Letizia Ramolino in his family's ancestral home, Casa Buonaparte, in the town of Ajaccio, the capital of the island of Corsica.

Archimedes Greek mathematician, physicist, engineer, inventor, and astronomer Archimedes of Syracuse (/ˌɑːrkɪˈmiːdiːz/;[2] Greek: Ἀρχιμήδης; c. 287 – c. 212 BC) was a Greek mathematician, physicist, engineer, inventor, and astronomer.[3] Although few details of his life are known, he is regarded as one of the leading scientists in classical antiquity. Generally considered the greatest mathematician of antiquity and one of the greatest of all time,[4][5][6][7][8][9] Archimedes anticipated modern calculus and analysis by applying concepts of infinitesimals and the method of exhaustion to derive and rigorously prove a range of geometrical theorems, including the area of a circle, the surface area and volume of a sphere, and the area under a parabola.[10] Other mathematical achievements include deriving an accurate approximation of pi, defining and investigating the spiral bearing his name, and creating a system using exponentiation for expressing very large numbers. Biography Discoveries and inventions

Millennialism Belief that a Golden Age or Paradise will occur prior to the final judgment Millennialism (from millennium, Latin for "a thousand years") or chiliasm (from the Greek equivalent), is a belief advanced by some religious denominations that a Golden Age or Paradise will occur on Earth prior to the final judgment and future eternal state of the "World to Come". Christianity and Judaism have both produced messianic movements which featured millennialist teachings—such as the notion that an earthly kingdom of God was at hand. These millenarian movements often led to considerable social unrest.[1] Similarities to millennialism appear in Zoroastrianism, which identified successive thousand-year periods, each of which will end in a cataclysm of heresy and destruction, until the final destruction of evil and of the spirit of evil by a triumphant king of peace at the end of the final millennial age. Judaism[edit] Christianity[edit] came to life and reigned with Christ a thousand years. Utopianism[edit]

Maurice de Saxe Count of Saxony Childhood[edit] Maurice was born at Goslar, an illegitimate son of Augustus II the Strong, King of Poland and Elector of Saxony, and the Countess Maria Aurora of Königsmarck. He was the first of eight extramarital children whom August acknowledged, although as many as 354 are claimed by sources, including Wilhelmine of Bayreuth, to have existed. In 1698, the Countess sent him to his father in Warsaw. August had been elected King of Poland in the previous year, but the unsettled condition of the country obliged Maurice to spend the greater part of his youth outside its borders. Military career[edit] Battle of Lawfeld, 2 July 1747 : Louis XV pointing out the village of Lawfeld to Maurice Upon his return to the camp of the Allies at the beginning of 1710, Maurice displayed a courage so impetuous that Prince Eugene admonished him to not confuse rashness with valour. He next served under Peter the Great against the Swedes. Engraving of Maurice of Saxe Writings[edit] Ancestry[edit]