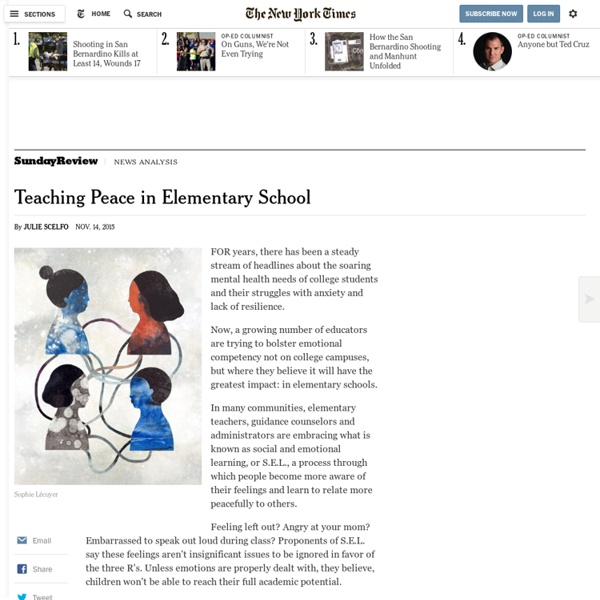 Photo FOR years, there has been a steady stream of headlines about the soaring mental health needs of college students and their struggles with anxiety and lack of resilience. Now, a growing number of educators are trying to bolster emotional competency not on college campuses, but where they believe it will have the greatest impact: in elementary schools. In many communities, elementary teachers, guidance counselors and administrators are embracing what is known as social and emotional learning, or S.E.L., a process through which people become more aware of their feelings and learn to relate more peacefully to others. Feeling left out? “It’s not just about how you feel, but how are you going to solve a problem, whether it’s an academic problem or a peer problem or a relationship problem with a parent,” said Mark T. S.E.L., sometimes called character education, embraces not just the golden rule but the idea that everyone experiences a range of positive and negative feelings. Dr. Related:  Essentials of Education Continued ~Part III~

Teaching Thanksgiving in a Socially Responsible Way School Thanksgiving activities often mean dressing children in “Indian” headdresses and paper feathers as they sing “My Country ’Tis of Thee” or “Mr. Turkey.” Some teachers might even ask their students to draw themselves as Native Americans from the past, complete with feather-adorned headbands and buckskin clothing. Native Americans have been speaking out and writing back against the colonialist narrative of Thanksgiving for as long as the American narrative has existed. Doris Seale (Santee/Cree) and Beverly Slapin (Dakota/Cree/Abenaki) edited A Broken Flute in 2005, which includes a chapter that deconstructs the myths perpetuated about the first Thanksgiving. Teaching about Thanksgiving in a socially responsible way means that educators accept the ethical obligation to provide students with accurate information and to reject traditions that sustain harmful stereotypes about indigenous peoples.

Manning: Native American Heritage Month: 6 Tips for Educators, Parents On October 30, 2015, President Obama proclaimed the month of November as Native American Heritage Month. Here are some tips and ideas for consideration, for educators and parents of both Native and non-Native students. 1. Firstly, talk with students about the significance of the month and presidential proclamation Review and discuss the presidential proclamation with students. 2. The overwhelming majority of representations of Native Americans, including many educational resources, depict Native Americans as people of the past — in tipis, buckskin, and feathers. 3. Historical record tends to favor male leaders and chiefs, however women have historically been central to tribal societies. Also, remember to highlight women of the past and women of the future. 4. There are presently over 567 federally recognized tribes in the United States with very diverse communities and distinct cultures. 5. 6. Sarah Sunshine Manning

Want To Make A School Better? Get Kids To Show Up : NPR Ed At 7:30 a.m. Monday through Friday, you'll find Mark Gaither standing on Gough Street in southeast Baltimore. He's outside Wolfe Street Academy, the neighborhood elementary school where he's the principal. Gaither has a huge umbrella in case it rains, and thick gloves for when it snows. He's here each morning to greet students and families as they come to school — which should make for at least 225 "good mornings." This daily greeting is one part of the school's strategy to fix chronic absence and turn around what was once a failing school. Absenteeism will be front and center today at the U.S. Chronic absence is defined as missing more than 10 percent of the school year — just two days a month. At Wolfe Street Academy, many of the families work at the nearby Port of Baltimore. Ten years ago, this school was in bad shape: Test scores were terrible, and the state was threatening to take over. He launched a kid-by-kid approach — heavily focused on data — to raise attendance.

Blogging: Writing in the Real World If you asked my students whether they do a research paper in my seventh grade English class, they would probably say “no”—not because they don't do research, but because they don't do research and write about it in the traditional manner. The same would probably be true if you asked them about informative, argumentative, or any other kind of writing. Why? Blogging is my students' writing platform, and they enjoy writing and connecting with others about their topic so much that it no longer feels like a writing assignment. The Common Core State Standards (CCSS) encourage students to incorporate technology into the writing process and call on teachers to have students write for a range of purposes, allowing them time for research, reflection, and revision. Getting to Know You A heart mapping activity prompts students to explore their personal interests as they prepare to blog. We also look at blogs as mentor texts. When you teach this way, it is hard to plan in advance. Beginning the Blog

Racial Primes and Black Misandry on Historically White Campuses: Toward Critical Race Accountability in Educational Administration | William A Smith, Tara J. Yosso, and Daniel Solorzano Indeed, to effectively challenge a negative campus racial climate, univer-sities must be deliberate in deconstructing the effects of racial priming, whichbegins well before students enroll in college. In an 11-month ethnographicstudy conducted in several multiethnic day care centers, Debra Van Ausdaleand Joe Feagin (2001) discovered that White children as young as 3 years of age are “engaged in a highly interactive, socially regulating process as theymonitor and shape their own behavior and that of other children and adults inregard to racial matters” (p. 33). The researchers further report that thesechildren “not only learn and use ideas about race and ethnicity but also embedin their everyday language and practice the understood identities of who isWhite, Black, Latino, and Asian. Smith et al. / RACIAL PRIMES AND BLACK MISANDRY561 use or unauthorized distribution. © 2007 University Council for Educational Administration.

Teacher Strikes and the Rise of Neoliberalism A Review of Against the Public: Teacher Strikes and the Decline of Liberalism, 1968-1981, by Jon Shelton In this award-winning dissertation, Jon Shelton recasts the story of postwar America by connecting the emergence of neoliberal conservatism to the public backlashes against increasingly militant teachers’ unions during the 1970s. It is a fitting choice. As both “a fundamental facet of everyday life” and the “the single-most expensive expenditure of local governments” (p. 1), public education offers fertile ground for probing key questions in American political, social, and cultural history. Chapter 1 examines the political and intellectual context of Pennsylvania’s landmark Public Employment Relations Act 195 (1970), “a far reaching experiment in public employee labor relations” (p. 72). In Chapter 3, Shelton uses a series of overlapping strikes in Chicago, Philadelphia, and St. Building on the pioneering works of Marjorie Murphy (Blackboard Unions: The AFT and the NEA, 1900-1980.

Dear Me: Things I Wish I’d Known When I Started Counseling By Barbara Gruener Part of our Counselor’s Corner series. Click to read other posts in the Counselor’s Corner. For as long as I can remember, I’ve been a writer. So today, my question is this: If you were to write a letter to a younger version of you, at the start of your career, what would it say? Dear Me {Version 3.0}, Congratulations on becoming a school counselor; what delight you must feel at the prospect of positively connecting with, nurturing, stretching, and shaping the hearts and minds of our future! As you start out, think about what you want former students to say about you at your retirement party and spend your days living up to that. Find a mentor to walk alongside you and be a sounding board as you make your way into the world as a climate changer. Celebrate who your students are—each one special, each one unique—every day. Get to know your colleagues and their backstories. Reach out to parents and community stakeholders. Be passionate and enthusiastic about your calling.

Psst! How to Curb Gossip in the Teacher’s Lounge By Andrew Hawk Having worked at four different schools as a teacher and a dozen more as a teaching assistant, I have been familiar with the teacher’s lounge for a long time. This private sanctuary offers teachers a place not just to eat, but also to recharge for the remainder of the day. Unfortunately, this room can also be home to less positive interactions. Venting is a healthy thing for people to do when they are frustrated. Unfair to Students and Colleagues In the course of a school year, teachers will often come across private information about students that may affect their classroom performance. Finger-pointing is a common form of gossip that occurs among teachers. The problem is that in the midst of the finger-pointing, relationships deteriorate and nothing seems to change. Here are some tips for curbing gossip at your school: Don’t Avoid the Teachers’ Lounge When I was in college, professors told teaching candidates to stay out of the teachers’ lounge. Like this: Like Loading...