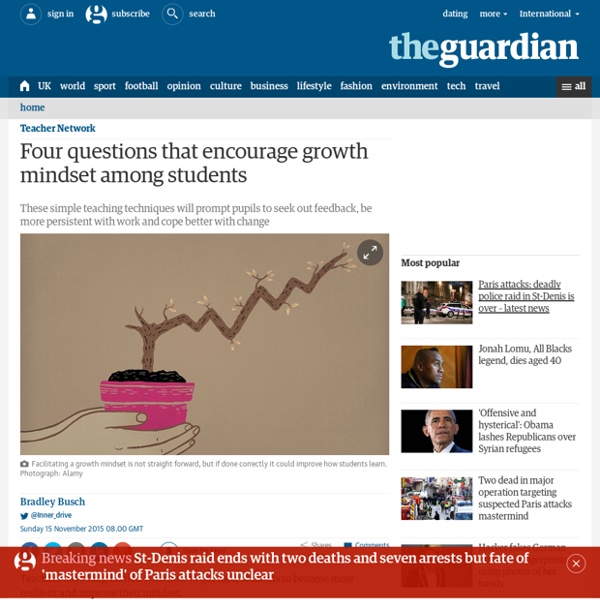 Teachers have long battled with how to get their students to become more resilient and improve their mindset. One popular theory, pioneered by Carol Dweck, professor of psychology at Stanford University, is the idea of growth mindset. Dweck explains that some students believe ability is malleable and can be improved (a growth mindset), while others think it is set in stone, probably decided at birth (a fixed mindset). Evidence suggests that those with a growth mindset seek out feedback on how to get better, persist with work for longer and cope better with change – all attitudes teachers want to develop in their young charges. How can teachers encourage a growth mindset? When working with young people, choosing which behaviours to praise can have a profound impact. As well as thinking of the feedback you offer your class, there are certain questions you can ask to get them thinking about their own mindset: Is the effort today worth the reward tomorrow? This can be a simple weekend project.

Nurturing Growth Mindsets: Six Tips From Carol Dweck - Rules for Engagement Washington Stanford researcher Carol Dweck clearly tapped into a powerful and compelling idea when she linked the concept of growth mindsets to academic success. As fans of Dweck's research can quickly explain, people with fixed mindsets see strengths and skills as inate traits, like eye color. You're either born with them, or you're not.

EdintheClouds: Carol Dweck Revisits the 'Growth Mindset' By Carol Dweck For many years, I secretly worked on my research. I say "secretly" because, once upon a time, researchers simply published their research in professional journals—and there it stayed. However, my colleagues and I learned things we thought people needed to know. We found that students' mindsets—how they perceive their abilities—played a key role in their motivation and achievement, and we found that if we changed students' mindsets, we could boost their achievement.

A Positivity Ratio to Tip You to Flourishing? Or “The Happiness Tipping Point” NOTE: The idea of Positivity Ratio of 3:1 as a magic gateway to flourishing was challenged in a 2013 American Psychologist article by Brown, Sokal and Friedman. Losada, who managed the non-linear mathematical equations, was not able to mount a mathematical rebuttal to this critical review. A response by Fredrickson in the same American Psychologist issue stepped away from the 3:1 ratio as a defining turning point. However when looking at the raw data (and not the complex mathematics), Losada’s qualitative conclusions still show that higher numbers of positive interactions are associated with higher performing business teams. And Fredrickson’s data (and many others) show that more experiences of positive emotions are associated with personal flourishing. – Eric Karpinski, December, 2013

Recognizing and Overcoming False Growth Mindset All educators care deeply about their students' motivation. They want them to love learning, and to be resourceful and persistent in the face of learning challenges. They don't want their students to lose heart when they get stuck, make mistakes, or receive disappointing grades. In this context, the growth mindset entered the scene. A growth mindset is the belief that you can develop your talents and abilities through hard work, good strategies, and help from others.

How Does the Brain Learn Best? Smart Studying Strategies In his new book, “How We Learn: The Surprising Truth about When, Where, and Why It Happens,” author Benedict Carey informs us that “most of our instincts about learning are misplaced, incomplete, or flat wrong” and “rooted more in superstition than in science.” That’s a disconcerting message, and hard to believe at first. But it’s also unexpectedly liberating, because Carey further explains that many things we think of as detractors from learning — like forgetting, distractions, interruptions or sleeping rather than hitting the books — aren’t necessarily bad after all. They can actually work in your favor, according to a body of research that offers surprising insights and simple, doable strategies for learning more effectively. Society has ingrained in us “a monkish conception of what learning is, of you sitting with your books in your cell,” Carey told MindShift. “How We Learn” presents a new view that takes some of the pressure off.

The Risks of Rewards ERIC Digest December 1994 ERIC Identifier: ED376990 Developing a Growth Mindset in Teachers and Staff An idea that is beginning to gain a lot of favour in educational circles at the moment is the notion of fixed versus growth mindsets, and how they might relate to students and learning. Based on the work of Stanford University psychologist, Carol Dweck, the idea of mindset is related to our understanding of where ability comes from. It has recently been seized upon by educators as a tool to explore our knowledge of student achievement, and ways that such achievement might be improved.

The Science: The Growth Mindset - Mindset Works®: Student Motivation through a Growth Mindset, by Carol Dweck, Ph.D. Why the Growth Mindset? When students and educators have a growth mindset, they understand that intelligence can be developed. Students focus on improvement instead of worrying about how smart they are. They work hard to learn more and get smarter. Based on years of research by Stanford University’s Dr. Growth Mindset: Clearing up Some Common Confusions By Eduardo Briceño A growth mindset is the understanding that personal qualities and abilities can change. It leads people to take on challenges, persevere in the face of setbacks, and become more effective learners. As more and more people learn about the growth mindset, which was first discovered by Stanford Professor Carol Dweck, we sometimes observe some confusions about it. Recently some critiques have emerged. Of course we invite critical analysis and feedback, as it helps all of us learn and improve, but some of the recent commentary seems to point to misunderstandings of growth mindset research and practice.

What Believing in the Possibilities Can Do For Learning and Teaching By Thom Markham In medicine, the placebo effect is well known, but still mysterious. Through some unknown connection between mind and body, placebos produce changes in brain states, immune systems, blood pressure and hormone levels. Although most of us think of a placebo as a sugar pill, in fact it’s any intervention in which beliefs produce measurable changes in physiology, and thus performance. Here’s a typical example: When adults enter a flight simulator and take on the role of Air Force pilots flying a plane, their eyesight improves 40 percent more than adults who just “pretend” to fly a plane in a broken simulator.

A UPenn psychologist says 'grit' is key to success in life — here's how to become a grittier person People love personality tests, and I’m no exception, so I was thrilled to find a copy of the “grit scale” in Angela Duckworth’s new book, “Grit.” Your agreement or disagreement with 10 statements, including “I often set a goal but later choose to pursue a different one” and “I have overcome setbacks to conquer an important challenge,” produces a total grit score, which reveals how much passion and perseverance you typically display. (You can take a 12-item version of the scale here.) Your grit score is important because, according to Duckworth, a professor of psychology at the University of Pennsylvania, it strongly influences how far you’ll go in life.

5 Tips for a Happy Life from Winnie the Pooh “Did you ever stop to think, and forget to start again?” “Well,” said Pooh, “what I like best — ” and then he had to stop and think. Because although eating honey was a very good thing to do, there was a moment just before you began to eat it which was better than when you were, but he didn’t know what it was called.” Winnie the Pooh is a kind bear. He cares greatly about his friends.