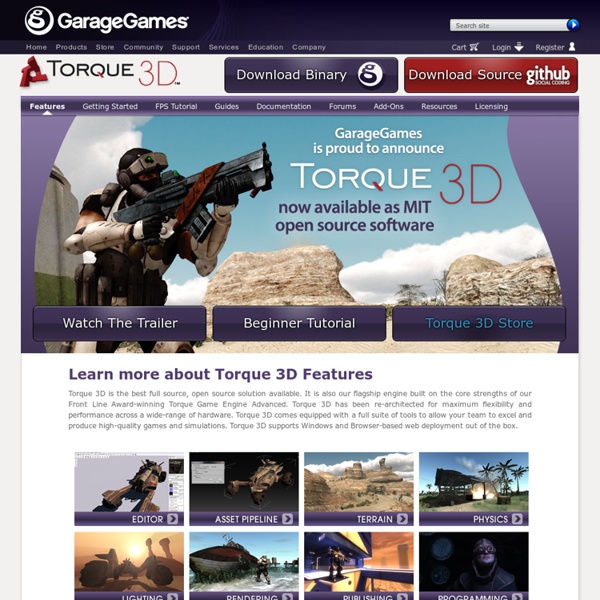 6.1.14 (Élias) released [Sympa mailing list server] Valve rend gratuit son SDK Source Valve rend gratuit son SDK Source Valve, qui a rendu gratuit Team Fortress 2, il y a peu de temps, a aussi rendu gratos le SDK du moteur SOURCE. Cela signifie que n'importe qui, peut maintenant développer de nouveaux jeux ou mods basés sur ce moteur. Pour obtenir ce SDK, vous devez quand même être client de Valve, donc acheter un jeu comme TF2 ou Half Life 2 sur Steam. Le SDK est ensuite téléchargeable directement via Steam. Plus d'infos sur le modding de jeux ici. [Source] Vous avez aimé cet article ? Flow, Player Journey and Employee Satisfaction - Andrzej's Blog What follows is an exploration of what happens when you start to map player journeys in games onto Flow theory and then try to bring that into the workplace. Just for fun! It was inspired by Mr Scott Golas after seeing last weeks post on relatedness. What is Flow and what is the Player Journey? Mihayi Csikszentmihalyi suggested the concept after seeing that under certain conditions people’s experiences became optimal. He identified some key factors that could lead to such a phenomenon. Clear goals and progressConstant and Immediate feedbackBalance between the perceived challenge and the perceived level of skill needed In 1997 he provided the world with the following visual representation of his theory. When talking about games, the tendency is to simplify this idea, concentrating instead on the concept of flow as a channel between boredom and anxiety or frustration. As we can see here, if a challenge exceeds the abilities of the current skill level, it can lead to frustration. I Hope so!!

PlayMaker - Visual Scripting for Unity3D ColorPipe.org | Une communauté d'académiques et d'industriels de la post-production réunis autour des problématiques de gestion de la couleur The Origins of Flow | Motivate. Play. As a reader of MP, there's a decent chance that you're already familiar with the concept of "flow" championed by positive psychologist Mihaly Csikszentmihalyi (pronounced like this, not this). If you aren't up to speed on it, fear not; I'll go into the details in just a moment. The notion is immensely popular among game designers and theorists, whether they want to leverage games' power to put us into a flow state to pursue social good, are using psychophysiological tools to quantify flow and keep players in it, or simply using it as the blueprint for good game design. But as much as the games community wants to take flow as its own, there's more to the story. I finally sat down and read Csikszentmihalyi's principal book on the topic, and the truth of the matter is that "flow" is much more than a gaming concept. The key realization, and the one Csikszentmihalyi is famous for, is that there's a sweet spot where challenge and skill are well-matched that he dubbed the "flow channel".

Interactive Fiction ClubFloyd was founded on September 2, 2007. The idea behind it is that each week a group of people meet online to cooperatively play a game of interactive fiction. Meetings occur on the ifMUD, and an account is required to participate, as Guest accounts cannot join channels, which are necessary for discussing the game during play. Once you're logged in at the appointed time, enter the command "TOYSHOP" to join us, and we'll help you out from there. Transcripts are kept for every session, though the site gets updated sporadically.Have (lots of) patience, grasshoppers! Also contained within the list below are a smattering of NightFloyd transcripts. I have never received a single note from an author asking me to pull a transcript. Here are the transcripts of our past game-play sessions (some are rather lengthy and may take time to load, depending on your Internet connection). You can also click (and/or consider bookmarking) this link to jump to the most recent transcript(s) in the list.

Diaspora - Freeware Battlestar Galactica Game Refining the flow diagram | Motivate. Play. Last month, I posted on the origins of Csikszentmihalyi's concept of flow, but the diagram I focused on there (and that tends to pervade discussion of flow among game designers) is actually a bit dated. Preparing for a reading group on engagement here at IU, I came across this very readable chapter from the Handbook of Positive Psychology, in it was introduced to a much more nuanced version of the Flow Diagram. If you're familiar with the classic flow diagram, you might notice it has some deficiencies. Most notably, the experience of being in a high-skill, high-challenge state is markedly different that a low-skill, low-challenge state, even though both fall within the so-called "flow channel". As research on flow has progressed, it has become clear that the traditional model needs expansions, and the result is the diagram you see above. I won't go through all the regions in detail here, as the diagram should be clear to interpret by now.

Interactive Fiction Top 50 of all time (2011 edition) People were asked to send in a list of between 1 and 20 of their favourite IF games of all time (in no particular order). The number of points a game got was the number of lists on which it appeared. 35 participants cast a total of 437 votes on 183 different games; only the 48 games with 3 or more points are listed below. More information can be found here and here. News & updates (RSS) Details Games and Awards 1st Place: Spider and Web, by Andrew Plotkin2nd Place: Lost Pig, by Admiral Jota2nd Place: Photopia, by Adam Cadre4th Place: Anchorhead, by Michael Gentry5th Place: A Mind Forever Voyaging, by Steve Meretzky6th Place: De Baron, by Victor Gijsbers6th Place: Blue Lacuna, by Aaron A. This is version 6 of this page, edited by Victor Gijsbers on 1 October 2011 at 04:25 PM

Fun is Boring In the two weeks before writing this piece, I've seen easily a dozen scattered, derivative definitions of fun. Five page "manifestos" and weird Rubik's Cube personal philosophies. No respite at DigiPen the other day. Covering for another prof, I thought I'd poison the youth with design theory. "Oh, sweet," says one edgy-looking student. "Me and a buddy have been talking about making a unified theory of fun. "Neat," I say. I click to the first slide, a cropped image of the cover. "Uhh, Raph?" "Ian Bogost's Persuasive Games?" "I stared at the first page for awhile." "Good enough." Fun is a lazy word. Let's pick on fun, specifically. Fun is a process. Testing early and often doesn't just work out bugs. That fun process sometimes gets a few tries. Hayashida said, "What you have to do is make an investigation at every new stage and say, 'Okay, which of these elements is working well for us, and which of them do we need to think about minimizing, or removing entirely?'"