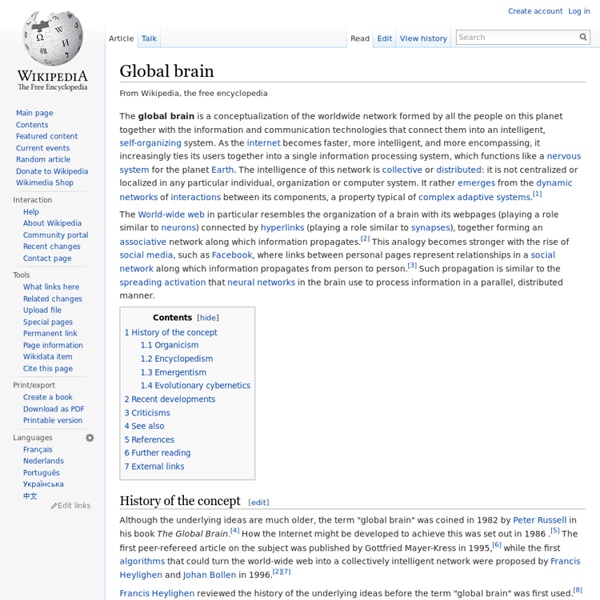 The Global Brain Institute The GBI uses scientific methods to better understand the global evolution towards ever-stronger connectivity between people, software and machines. By developing concrete models of this development, we can anticipate both its promises and its perils. That would help us to steer a course towards the best possible outcome for humanity. Objectives (for more details, check our strategic objectives and activities) Assumptions We see people, machines and software systems as agents that communicate via a complex network of communication links. Challenges that cannot be fully resolved by a single agent are propagated to other agents, along the links in the network. The propagation of challenges across the global network is a complex process of self-organization.

How to Burst the "Filter Bubble" that Protects Us from Opposing Views The term “filter bubble” entered the public domain back in 2011when the internet activist Eli Pariser coined it to refer to the way recommendation engines shield people from certain aspects of the real world. Pariser used the example of two people who googled the term “BP”. One received links to investment news about BP while the other received links to the Deepwater Horizon oil spill, presumably as a result of some recommendation algorithm. This is an insidious problem. This is the filter bubble—being surrounded only by people you like and content that you agree with. And the danger is that it can polarise populations creating potentially harmful divisions in society. Today, Eduardo Graells-Garrido at the Universitat Pompeu Fabra in Barcelona as well as Mounia Lalmas and Daniel Quercia, both at Yahoo Labs, say they’ve hit on a way to burst the filter bubble. They found over 40,000 Twitter users who had expressed an opinion using the hashtags such as #pro-life and #pro-choice.

US Military Scientists Solve the Fundamental Problem of Viral Marketing Viral messages begin life by infecting a few individuals and then start to spread across a network. The most infectious end up contaminating more or less everybody. Just how and why this happens is the subject of much study and debate. Network scientists know that key factors are the rate at which people become infected, the “connectedness” of the network and how the seed group of individuals, who first become infected, are linked to the rest. It is this seed group that fascinates everybody from marketers wanting to sell Viagra to epidemiologists wanting to study the spread of HIV. So a way of finding seed groups in a given social network would surely be a useful trick, not to mention a valuable one. These guys have found a way to identify a seed group that, when infected, can spread a message across an entire network. Their method is relatively straightforward. This process finishes when there is nobody left in the network who has more friends than the threshold. Expect to hear more!

New research to uncover nuances of networks Feb. 20, 2013 9:01 a.m. When a species disappears from a region, the rest of the ecosystem may flourish or collapse, depending on the role that species played. When a storm rolls across the coast, the power grid might reconfigure itself quickly or leave cities dark for days. Each of these systems is a kind of network, with thousands of members and relationships linking them. With current network theory, scientists can predict a few simple trends, such as which web pages are likely to get more hits over time. A new four-year, $2.9 million grant from the Defense Advanced Research Projects Agency is supporting SFI research that will, the researchers hope, propel their understanding of networks to the next level. Nodes and links in real networks are cloaked in details, he says. “We’re at a very early stage of understanding how structure is related to dynamics,” Moore says. They have already made progress.

Data Visualization Software | Tulip The DIMES project | Join the journey to map the Internet, download the DIMES agent today Math algorithm tracks crime, rumours, epidemics to source (Phys.org) -- A team of EPFL scientists has developed an algorithm that can identify the source of an epidemic or information circulating within a network, a method that could also be used to help with criminal investigations. Investigators are well aware of how difficult it is to trace an unlawful act to its source. The job was arguably easier with old, Mafia-style criminal organizations, as their hierarchical structures more or less resembled predictable family trees. In the Internet age, however, the networks used by organized criminals have changed. "Using our method, we can find the source of all kinds of things circulating in a network just by 'listening' to a limited number of members of that network," explains Pinto. Out in the real world, the algorithm can be employed to find the primary source of an infectious disease, such as cholera. The validity of this method thus has been proven a posteriori. Explore further: Pseudo-mathematics and financial charlatanism

Small world experiment The "six degrees of separation" model The small-world experiment comprised several experiments conducted by Stanley Milgram and other researchers examining the average path length for social networks of people in the United States. The research was groundbreaking in that it suggested that human society is a small-world-type network characterized by short path-lengths. Historical context of the small-world problem[edit] Guglielmo Marconi's conjectures based on his radio work in the early 20th century, which were articulated in his 1909 Nobel Prize address,[1] may have inspired[citation needed] Hungarian author Frigyes Karinthy to write a challenge to find another person to whom he could not be connected through at most five people.[2] This is perhaps the earliest reference to the concept of six degrees of separation, and the search for an answer to the small world problem. Milgram sought to devise an experiment that could answer the small world problem. The experiment[edit] Results[edit]