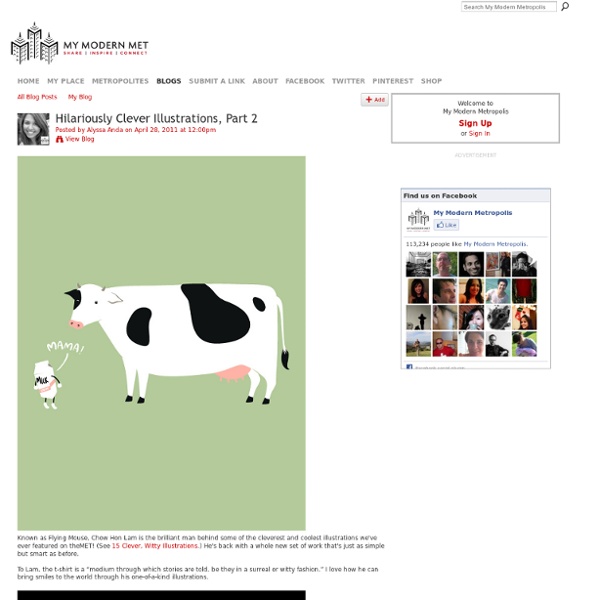 Known as Flying Mouse, Chow Hon Lam is the brilliant man behind some of the cleverest and coolest illustrations we've ever featured on theMET! (See 15 Clever, Witty Illustrations.) He's back with a whole new set of work that's just as simple but smart as before. To Lam, the t-shirt is a “medium through which stories are told, be they in a surreal or witty fashion.” I love how he can bring smiles to the world through his one-of-a-kind illustrations. Chow Hon Lam's website Views: 78244 Tags: Chow Hon Lam, Flying Mouse, art, illustration Related:  :)

30 Most Passive Aggressive Things To Ever Happen. Published on February 26th, 2014 Some people make being passive aggressive look like an art form. Sometime this messages can be really amusing check them out. Share this post with your Friends Share you thoughts on this one TetraBox Light by Ed Chew Liquid to Light Designer Ed Chew takes a green step in the right direction with the TetraBox lamp, a light object made from discarded drink packets that would have otherwise ended up in landfills already packed to the brim. The design is achieved by unfolding the packets and refolding them into hexagonal and pentagonal sections that are then pieced together to form a geodesic sphere or any other desired shape. Designer: Ed Chew

Mesmerizing table looks like ocean depths | I Lobo You | Boca do Lobo's inspirational world | Exclusive Design | Interiors | Lifestyle | Art | Architecture | Fashion Duffy London designed the table that is right now in the mouths of the world. It’s a mesmerizing table that looks like ocean depths as the designer took those as inspiration. Duffy called this artistic table “Abyss table”. To create this visual effect, the table is made of multiple layers of stacked glass and wooden slices. The design creates a geological cross-section of the sea, completing the table as a 3-dimensional model of a geological map. How the idea came to life: ‘I was looking into sheets of thick glass at my glass manufacturer’s factory, and noticed how the material darkened as they added more layers – the same way the sea does as it deepens.’ The furniture piece acts as both a conversation piece as much as it does a functional one.

Perls before Swine Sometimes you spend an hour writing a script to display cat pictures. This is one of those times. Although, interestingly perl sorts the files by size. By popular (one) request, here's my cat being stupid: 20 People Having A Worse Day Than You It has been a cold and wet start to the year and you maybe feeling a little down in the dumps. We have pulled together a few examples of people having much worse day’s than you to cheer you up a little. (The spider one in unbelievable!). This guy misjudged the height of the gate house. This is the last thing anybody needs first thing on a frosty morning! Probably not the spot he would choose to land. Never annoy a hippo. Imagine seeing this heading toward your windshield! Well it serves him right. While peering into this bin, he got himself a little stuck. Well you will stand right next to a huge puddle. The captain of this ship was left a little red faced. Now there is incentive to get up that ladder quick! I am lost for words… Watch out for the ditch. Cycling is dangerous! “Is that gun for me?” A bit of a cold trip to work that day. Always get someone to hold the ladder. It was a little we that day. Always put the lid on your paint before setting off on a journey. Now that is just rude!

Insanely Detailed Artwork Created in 10 Months! Imagine taking your 0.5 mechanical pencil and drawing on a large piece of white paper for 10 hours a day, seven days a week, over a course of 10 full months. Think you'd give up after a few hours or maybe even a few days? Well, it's safe to say that most people would. Aptly titled Solitude, the personal project stands an astounding 5 ft high and 8 ft across. "It took courage to start it as I had never done anything that size before," he tells us. Inspired by the large scale work of pop surreal artist Todd Schorr, Fenton knew he could tackle this project. Solitude was born out of an idea to put together a large scale drawing of different religious references like a "Ganesh-like character, a grinning Buddha, or a faint crucifix adorning a rooftop in the far distance." "This might seem strange," he explains, "as I am not a religious person. "My unhealthy fear of death, and fear of the unknown is a constant battle for me," he continues. Joe Fenton's website and Behance

5 Heroic Attempts to Do Good (That Backfired Horribly) As we've pointed out before, the road to hell is paved with good intentions, and the street lamps along that road are illuminated by feeble attempts at self-improvement. The cold, harsh reality is that sometimes doing the right thing doesn't necessarily pay off. For example ... #5. Chad Baker/Jason Reed/Ryan McVay/Photodisc/Getty A group of Christian Scientists found the ideal plot of land for their church. Christian Science DixonIt's an idea so heartwarming that the blueprints were actually drafted by puppies and kittens. The church members avoided a possible local backlash, respected the sanctity of the old tree, and at the same time created an environmentally friendly building that warms naturally in the winter without any costly heating. The Backfire: Here's what the building looks like from the sky, via Google Earth: Google Earth"No, it's uh ... a 'J' ... for 'Jesus' ... yeah." Proving once and for all that, if there is a God, he's definitely a Cracked reader. #4. #3. Photos.com

Keira Rathbone's Typewriter Art Take a look at Keira Rathbone's typewriter art - yep, she bangs out the images on a little orange typewriter she has been using since 2003. Wild. All images via Keira's Facebook page. Beautiful Chaos: Watercolor Paintings by Lora Zombie Lora Zombie calls her bright, color splattered watercolors “grunge art” but I’m fairly sure you could label it anything from “magnetic” to “uplifting” and be right on. Her speech bubble heavy works, mix diverse linear characters with perfectly placed splashes of paint, giving the pieces a happy mix of perfection and chaos. If you cruise by her website, lorazombie.com or DeviantArt, you’ll find a plethora of other work with new pieces from her latest show at Mart Gallery, St. Petersburg, Russia. See the bottom of this post for an intimate look at Lora creating her piece “Love Shock.” If you like this art, see our post on watercolors by Conrad Roset. Below, Lora Zombie creates Love Shock. Love Shock. The artist herself. Via: abduzeedo.com Known in some circles as the most amazing man in the universe, he once saved an entire family of muskrats from a sinking, fire engulfed steamboat while recovering from two broken arms relating to a botched no-chute wingsuit landing in North Korea.

Kitten vs Two Scary Things ► Our NEW Android friendly app - brings you our latest exclusives PLUS the funniest videos and pictures from the internet DAILY - in one place. ► Bargain Mug Of The Week from The Poke Shop DIRTY LAUNDRY This is so true, where to put your dirty laundry. Come on people, enough is enough. Welcome to the start of the week, Monday. Splendid couple – slept with both of them. Maurice Bowra I said to my wife, “Was you faking it last night?” Ricky Grover

Clever Illustrations: Copywriter vs. Art Director The Machine Ready for a set of clever illustrations? Like that funny series Paris vs. With that in mind, check out these new illustrations that show the eternal dispute between copywriters and art directors. The Brush The Moleskin What My Mom Thinks I Do The Colors Reading Time The File The App The Social Network The Reason for Our Anger The Tattoo Leaving the Agency