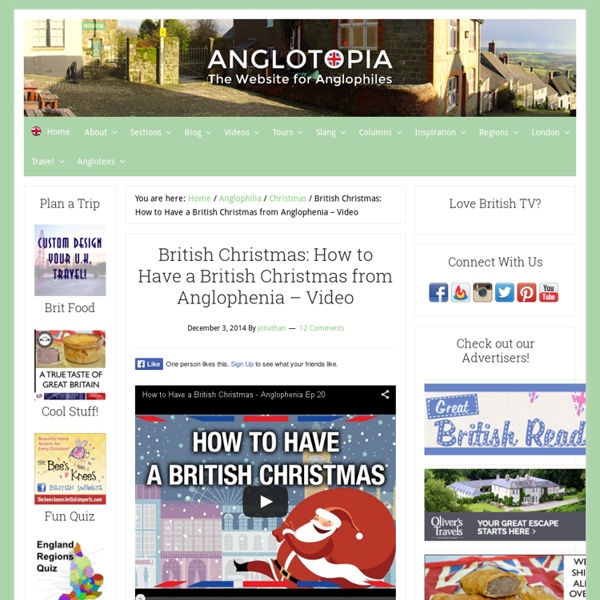 Related:  Around the world • Holidays

The EFL SMARTblog: Merry Christmas Mr Bean Teacher's note; The activities in the worksheet at the bottom of this post are based on the full episode available on DVD or on cannot be embedded here). This post contains some exercises based on the embeddable youtube clips. The answers are in the worksheet. DVD availablehere Mr Bean celebrates the traditional British Christmas: the baubles, the crackers, the nativity scene, the carols, the presents, the turkey and the mistletoe... they are all here.

Swedish Lucia Craig Morey, Lucia Why not teach your students to explain the Swedish tradition of Saint Lucia Day to foreigners they might be meeting in the future. Here is a short YouTube video explaining the basics in English. Link:Swedish Lucia for Dummies For some Lucia vocabulary and longer texts, visit Teach by Calendar Education to the Core: Holidays/Christmas Around the World Unit and Mini-Books Hi there! Just finished my Holidays/Christmas around the World Unit! Here is a little peek! If you are interested in this priced unit, click on any of the pictures or the link to my store to find out more.

Halloween Horror Story The Life and Death of a Pumpkin won the Best Short Film and Best Concept at the 2006 Chicago Horror Film Festival. It was directed by Aaron Yonda, who is probably best known for his part in the Chad Vader series. Note that some of the language in the story is quite grotesque. Christmas in Other Countries Christians all over the world celebrate the birth of Christ on December 25 . It is a joyous holiday where families get together, give each other presents, decorate houses, sing traditional songs and go to mass . The word Christmas comes from the old English “Christes Maesse” , which means Christ’s mass . Although Christians believe that Jesus was born in the small town of Bethlehem, we don’t know the exact date of birth because stories about Jesus Christ were written down much later. By the 4th century Christians were divided into two churches: the eastern church was in Constantinople, today’s Istanbul, and the western church was based in Rome. Each church celebrated Christmas on different days.

Best of Christmas 6-9 Background What’s Christmas Really About A mix of movie clips (Year 6-9)The History Of Christmas – Part 1, Over an hour long, old video about everything you ever need to know about the history of X-mas and Part 2 The History of Santa Claus Warm-up Santa’s Elves Dogs and Cats with Human Hands Making Toys2015 Johnson Family Dubstep Christmas Light Show (11:04) Beware of the music, not everybody’s cup of tea