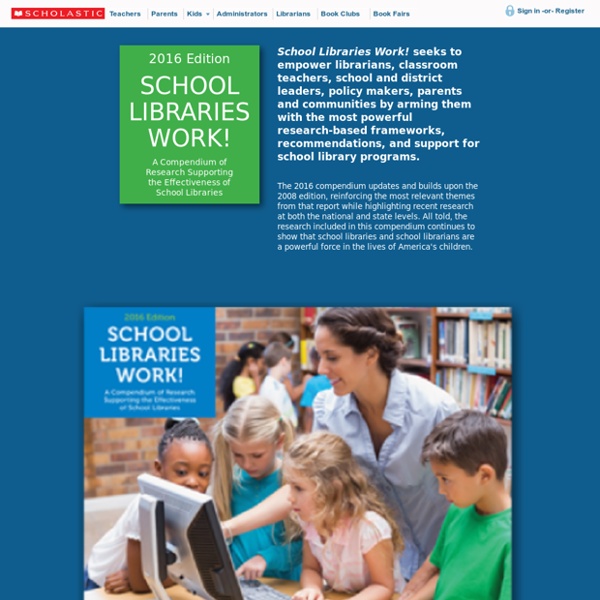 Study: Good School Libraries Affect Test Scores Columbia, SC (WLTX) - A study released Tuesday by the South Carolina Association of School Librarians shows that the more emphasis is put on school libraries--and the learning that takes place there--the better scores students receive on standardized tests. University of South Carolina Professor Dr. Karen Gavigan outlined the studies five areas of importance at a press conference Tuesday morning. "The presence of librarians and library support staff, instructional collaboration between librarians and teachers, traditional and digital collections, library expenditures, and access to computers," she explained. The study found that the schools which had these five components had better performance on the Palmetto Assessment of State Standards. One of third-grader Tavetria Amponsah's favorite things to do is to go to the library and read. School Librarian Debbie Cooper says the learning that takes place there is guided by collaboration between her and the teachers, but driven by the students.

Fighting fake news by teaching neuroscience & social psychology (2020) Guest blog: Dr Graham Gardner, Librarian, Abingdon School Introduction From claims over the size of the crowd at Donald Trump’s inauguration to automated “bots” retweeting disinformation generated in the “fake news” factories of Macedonia, the spread of disinformation, misinformation and outright falsehoods had become integral to contemporary life. While “alternative facts” are in the ascendant, our collective capacity to shoot them down is sadly lacking. In the US, landmark studies in 2016 and 2019 suggest that the vast majority of citizens can’t separate “fake news” from “real”, or distinguish between straight journalism, advertising and political ads. Resistance to information literacy education The rationale for an intense focus on “information literacy” couldn’t be clearer. Source: Many students unfortunately, might beg to differ. They didn’t dispute the problem of fake news. It was a dilemma. What to do? From research to practise The solutions:

The Results Are In: Libraries Matter. — Room to Read Insider At Room to Read we are passionate about testing our assumptions. We do not want to take for granted that what we’re doing is valuable and effective, we want to be able to prove it and improve it. When it comes to our school libraries, it can be easily supposed that our libraries are enhancing children’s reading habits, but we wanted to test this assumption and find out more. Does having a library help make a child more likely to read for pleasure at school? And what about at home? Measuring the impact of thousands of libraries across multiple countries is quite a formidable undertaking, but with support from the Bill and Melinda Gates Foundation, we commissioned an independent, external research team to examine our libraries in Laos, Nepal, India, Sri Lanka, Zambia, and South Africa. Across all six countries, the evaluator visited more than 2,400 schools and interviewed more than 20,000 children. The study revealed more nuanced insights as well.

The Challenge That's Bigger Than Fake News (2017) Since the November 2016 presidential election, coverage of “fake news” has been everywhere. It’s hard to turn on the TV without hearing the term. Google and Facebook have pitched plans for fighting the menace.1 State legislators have even introduced bills to mandate K–12 instruction on the topic.2 Fake news is certainly a problem. Sadly, however, it’s not our biggest. Fact-checking organizations like Snopes and PolitiFact can help us detect canards invented by enterprising Macedonian teenagers,3 but the Internet is filled with content that defies labels like “fake” or “real.” For every social issue, there are websites that blast half-true headlines, manipulate data, and advance partisan agendas. The Internet dominates young people’s lives. Unfortunately, our research at the Stanford History Education Group demonstrates they don’t.* Between January 2015 and June 2016, we administered 56 tasks to students across 12 states. Assessments of Civic Online Reasoning Who’s Behind the Information?

The importance of school libraries in the Google Age Kay Oddone In Australia, access to the internet is almost ubiquitous. In 2014–15, 85% of the Australian population aged 15 years and over were internet users, with 99% of people aged 15–17 using the internet (ABS 2016). Regular newspaper articles spread the gloomy news about the demise of the teacher librarian; articles such as 'Teacher librarians on borrowed time' in The Age (Preiss 2014) speak of funding pressures in Australian schools — but this is not just a local phenomenon. Fortunately, in Australia almost all schools still have a library — and thanks to the Building the Education Revolution funding which prioritised school libraries in primary schools (Gillard 2009), many are quite new. The situation is dire, but the battle is not over yet. There are multiple reasons why schools must retain the teacher librarian role; and why, despite easy access to Google, this role is more important than ever. Scholastic's publication 'School Libraries Work!' How can a school exist without one?

NewsWise evaluation report 2018-19 This report evaluates the impact of the first year of NewsWise – a free, cross-curricular news literacy programme for 9- to 11-year-olds across the UK, developed by the Guardian Foundation, the National Literacy Trust and the PSHE Association, and funded by Google. NewsWise aims to empower children from disadvantaged communities with the skills and knowledge to engage with and enjoy news, to feel confident to ask questions and to challenge misinformation, and to have their own values and opinions. Between April 2018 to April 2019: 2,476 pupils in 42 UK primary schools took part in face-to-face NewsWise workshops, giving children the chance to learn about news, improve their news literacy skills and prepare their own reports540 teachers received face-to-face training, helping schools support and embed news literacy across the curriculum3,520 resources and 703 units of work were downloaded by schools from the NewsWise website Find out more about NewsWise.

Fake news and critical literacy resources | National Literacy Trust This series of fake news and critical literacy resources have been created in response to the findings and recommendations from the Commission on Fake News and the Teaching of Critical Literacy Skills in Schools. These resources are designed to help primary and secondary teachers, parents and school librarians equip children with the critical literacy skills they need to survive and thrive in today's digital world. The resources include: Primary Primary teaching resource which includes practical lesson ideas, critical questions and a directory of useful organisations and further resourcesPrimary discussion cards to help students think more critically about the texts they read in lessonsPrimary poster for displaying in the classroom Secondary Parents Top tips guide to help start conversations about fake news with children