How to Commit to a Goal 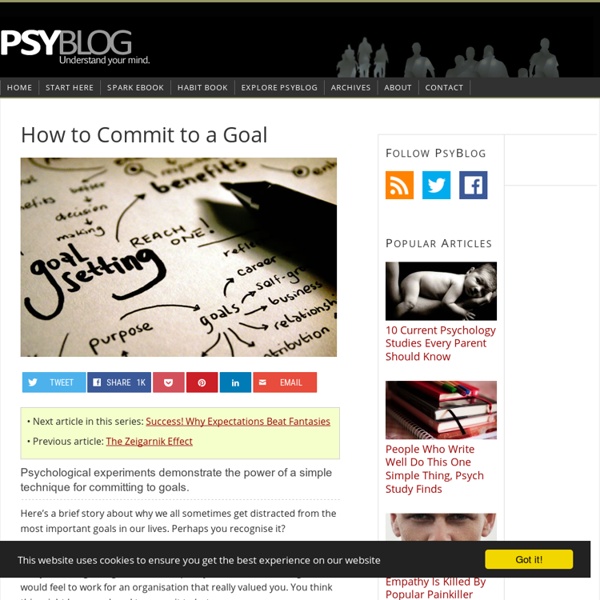 Psychological experiments demonstrate the power of a simple technique for committing to goals. Here’s a brief story about why we all sometimes get distracted from the most important goals in our lives. Perhaps you recognise it? You are thinking about changing your job because your boss is a pain and you’re stagnating. Work is busy at the moment, the money is OK and your home-life is also packed. Apart from anything else you’ve been thinking about learning a musical instrument. A few months pass. Unfortunately everyday life intervenes again and you do little more than search online for the price of electric pianos. After six months you come back full circle to changing your job, still without having made a real start towards any of these goals. Written like this, with six months compressed into a few paragraphs, it’s obvious the problem is a lack of goal commitment; although in reality, with everyday life to cope with, the pattern can be more difficult to spot. Reality check Hearts and minds Related:  Goal Setting

The 15-Minute Routine Anthony Trollope Used to Write 40+ Books Beginning with his first novel in 1847, Anthony Trollope wrote at an incredible pace. Over the next 38 years, he published 47 novels, 18 works of non-fiction, 12 short stories, 2 plays, and an assortment of articles and letters. Trollope achieved his incredible productivity by writing in 15-minute intervals for three hours per day. His strategy is explained in Mason Currey’s book, Daily Rituals (audiobook): “It had at this time become my custom,—and is still my custom, though of late I have become a little lenient of myself—to write with my watch before me, and to require of myself 250 words every quarter of an hour…This division of time allowed me to produce over ten pages of an ordinary novel volume a day, and if kept up through ten months, would have given as its results three novels of three volumes each in the year…” —Anthony Trollope Trollope’s approach may seem simple on the surface, but there is more going on here than it may appear at first glance. The Problem With Big Projects

ChangeCycle.com The Change Cycle™ Model Change has always been a necessary aspect of life and work, and our world is changing more rapidly than ever. It is likely that you will have to cope with a variety of changes in the near future. Your success and fulfillment - your emotional, mental, spiritual and physical well-being - depend on how well you adapt to change. People react, respond and adjust to change in a sequence of six predictable stages. Stage 1 – Loss to Safety In Stage 1 you admit to yourself that regardless of whether or not you perceive the change to be good or 'bad" there will be a sense of loss of what "was." Stage 2 – Doubt to Reality In this stage, you doubt the facts, doubt your doubts and struggle to find information about the change that you believe is valid. Stage 3 – Discomfort to Motivation You will recognize Stage 3 by the discomfort it brings. Stage 4 – Discovery to Perspective Stage 4 represents the "light at the end of the tunnel."

How to Change Your Beliefs and Stick to Your Goals for Good In one of my very first articles, I discussed a concept called identity-based habits. The basic idea is that the beliefs you have about yourself can drive your long-term behavior. Maybe you can trick yourself into going to the gym or eating healthy once or twice, but if you don’t shift your underlying identity, then it’s hard to stick with long-term changes. Most people start by focusing on performance and appearance-based goals like “I want to lose 20 pounds” or “I want to write a best-selling book.” But these are surface level changes. The root of behavior change and building better habits is your identity. This brings us to an interesting question. How to Change Your Beliefs The only way I know to shift the beliefs that you have about yourself and to build a stronger identity is to cast a vote for that identity with many, tiny actions. Think of it this way… Let’s say you want to become the type of person who never misses a workout. Of course, it works the opposite way as well. Read Next

Your Music, Your Personality Just as a glimpse inside a bedroom or office provides clues about someone's character, so too can a peek at his music collection. The question "What kind of music do you like?" is so revealing, it is the number one topic of conversation among young adults who are getting to know each other, according to psychologists Jason Rentfrow of the University of Cambridge in the U.K., and Sam Gosling at the University of Texas at Austin. Knowing whether a person prefers John Coltrane to Mariah Carey, or Puccini to Prince allows for remarkably accurate personality predictions, their research has found. What do your tunes say about you? Get Into Their Groove Strangers can accurately assess another person's level of creativity, open-mindedness and extroversion after listening to his or her top 10 favorite songs. Smart Sounds Fans of jazz, classical and other "complex" music typically have above-average IQ scores. Easy Listeners Drama Queens Parental Advisory Boom Town Brain Invasion Peak Performance

The 2 Types of Growth: Which One of These Growth Curves Are You Following? We often assume that life works in a linear fashion. People will say, “You get out of life what you put into it.” The basic idea is that for each unit of effort you put into a given task, you get some unit of return. There is just one problem. Instead, most areas of life follow two different types of growth. Which one of these growth curves are you following? Type 1: Logarithmic Growth The first type of growth is logarithmic. Logarithmic growth increases quickly in the beginning, but the gains decrease and become more difficult as time goes on. There are many examples of logarithmic growth in daily life. Fitness and Strength Training: The “beginner gains” come quickly at first, but then it becomes more difficult to get stronger each week.Literacy: Children and young students make massive leaps as they learn how to read. There are thousands of other examples. Type 2: Exponential Growth The second type of growth is exponential. The Challenges of Each Growth Curve How to Accelerate Your Progress

Mistakes Introverts Make We are all so very wonderful and yet--I'm sorry, but it must be said--we are not perfect. This blog has focused mostly on staking out turf in our culture for introverts , but now it's time to consider some things related to our introversion that might be interfering with our relationships and accomplishments. Many or most of us have probably made some of these mistakes at one time or another. I certainly have. Sure, some people need more social interaction than others, but we all need some. Yes, we hate the phone, and it's OK to ask that people respect and honor this. OK, if someone obstinately refuses any other form of communication and insists on frequent time-sucking phone calls, then you get some leeway to make your point. As much as we prefer deep conversation, plunging straight into your worldview over the onion dip at a party can be off-putting to others. Ah, the dreaded babble. If you suddenly realize you've careened into a long monologue, take a breath and look around.

5 Major Goal-Setting Myths That Keep You Stuck Steve Mura was a Triple-A baseball pitcher. He was starting one night in an away game, but he almost lost before leaving the dugout. Why? Courtesy of iStock/SIphotography “I can never win on this mound,” he told his pitching coach and shook his head. When it comes to making progress towards what matters most in life, there are at least five major myths we need to avoid like quicksand. Over the years, I’ve seen these rob countless people of happiness, success, and significance—me included. Myth No. 1: Your Past Determines Your Future Almost 40 percent of people in their twenties achieve their New Year’s resolutions each year, but not even 15 percent of those over 50 do—even though they probably have far more resources to do so. My guess is that they’ve also got more failures under their belt and don’t believe they can win. Maybe it was a failure in business or marriage, and now you’re doubtful about succeeding again. Mura’s coach knew better. That starts by challenging the myth.

10 Frisson-Inducing Songs (And the Definition of Frisson) Email Frisson is a word that comes from French meaning “a sudden, passing sensation of excitement; a shudder of emotion;” It can often be felt when listening to particularly moving songs, or emotionally fraught moments in movies. Also real life, but it’s hard to link to real life. Of course, frisson is hard to explain, but easy to demonstrate. 1. An ethereal-sounding post-rock band from Iceland, Sigur Ros exemplify why people are rightfully enthralled and terrified by Iceland. 2. Jeff Buckley recorded this Leonard Cohen cover in 1994. 3. Steven Sharp Nelson is a cello performer who has recorded a number of popular covers of songs using solely or principally cellos. 4. “What are you tryin’ to tell me here, little man? 5. This piece, composed in 1910, is scored to resemble an organ in sound by dividing the orchestra into three separate sections. 6. Fake history: One time, Gustav Holst wondered what the planets would sound like if they were music. 7. 8. 9. 10. Bonus Video: Miracle (2004)

How to Set and Achieve Your Goals Using Evernote We all have goals we want to achieve. The problem is many of us don’t have a system for tracking our progress. Today, I’m going to presents a simple, powerful, and effective system for setting and achieving goals – using Evernote. I originally learned this goal-setting system from Michael Hyatt on his popular course “Five Days to Your Best Year Ever”, but have since adapted it to suit my own personal preferences. Let’s look at each step. Step 1. Create a new tag and call it “2016 Goals.” Create a new note and call it “00. 2016 Goals” and tag it as “2016 Goals.” 1. 2. 3. 4. 5. Rearrange your goals into an order that makes sense to you. Step 2. Enter the actual goal as the title of your note and tag it “2016 Goals.” Step 2 is comprised of three parts: Key MotivationsSub-GoalsResources Let’s look at each part in detail. 1. Why is this goal important to you? Example: Goal: Lose 14 pounds. 1. “I want to feel attractive.” 2. “I want to have more self-confidence.” 3. 4. “I want find a partner.” 5. 2. 3.