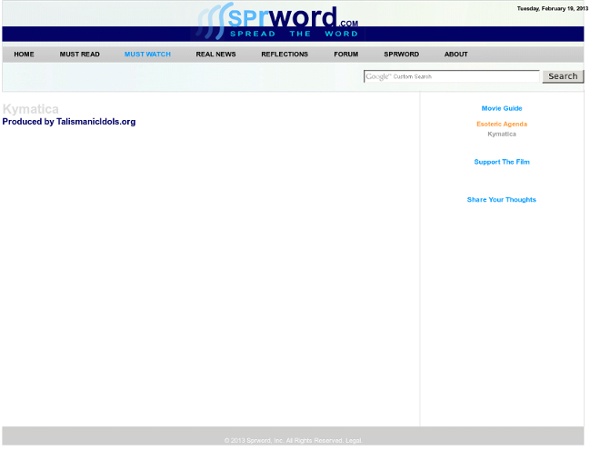 The Collective Evolution III: The Shift (2014 The Collective Evolution III is a powerful documentary that explores a revolutionary shift affecting every aspect of our planet. As the shift hits the fan, people are becoming more aware of the control structures that prevent us from experiencing our full potential. CE3 uses a different level of consciousness and scientific facts to bring clarity about the shift while dispelling myths about our true nature. It offers practical steps that we can implement right now to transition out of survival mode and into our more natural state of peace and co-operation. CE3 includes fascinating interviews with revolutionary speakers and people who are already opting out of the current socioeconomic system. The film examines hidden technologies and exciting alternatives for a bright limitless future.

The Future Of Food The Disturbing Truth Behind Genetic Engineering There is a revolution happening in the farm fields and on the dinner tables of America -- a revolution that is transforming the very nature of the food we eat. THE FUTURE OF FOOD offers an in-depth investigation into the disturbing truth behind the unlabeled, patented, genetically engineered foods that have quietly filled U.S. grocery store shelves for the past decade. From the prairies of Saskatchewan, Canada to the fields of Oaxaca, Mexico, this film gives a voice to farmers whose lives and livelihoods have been negatively impacted by this new technology. The health implications, government policies and push towards globalization are all part of the reason why many people are alarmed by the introduction of genetically altered crops into our food supply. The Future Of FoodThe Disturbing Truth Behind Genetic Engineering

Crossroads: Labor Pains of a New Worldview *Crossroads: Labor Pains of a New Worldview* is a documentary exploring the depths of the current human condition and the emergence of a worldview that is recreating our world from the inside out. Weaving together insights and findings from biology, psychology, network science, systems science, business, culture and media, the film reveals the inner workings of the human experience in the 21st century, urging viewers to step out of the box and challenge their own assumptions about who we really are, and why we do what we do. *Crossroads* places evolutionary context to today’s escalating social unrest, natural disasters, and economic failures. It illuminates the footsteps of an integrated worldview, penetrating its way through the power of social networks to the forefront of our personal and collective awareness. A refreshing reality check for all viewers and a clarion call for those who carry the seeds of the emerging worldview. Crossroads Official Site:

The Spiritual Secrets of Sound Subscribe and get Galactic News Daily Updates: by Jennifer Sodini “If you want to learn the secrets of the universe, think of energy, frequency, and vibration.” – Nikola Tesla If you think of universal reality as a cosmic satellite radio transmission, we are all frequencies that are being picked up from the same transmitter. Our frequencies in our daily life manifest in what you “frequently see”. “The knower of the mystery of sound knows the mystery of the whole universe.” – Hazrat Inayat Khan The spiritual significance of sound, frequency, and vibration has been understood by many mystery schools, Tibetan Monks, and Sufi mystics, and has been further analyzed through cymatics, the study of the visual effects of sound on matter. READ – The Science of Raising Your Vibration So with all of this being said, when we view life as this gigantic radio receiver, and we understand we have the ability to dial in to any frequency we wish… which frequency do we wish to tune in to? About the Author

Architects of Control – Mass Control & The Future of Mankind Produced by Michael Tsarion and Blue Fire Film, Architects of Control: Program One, explores humankind’s future and the posthuman world. Will the “perfect” human be a dumbed down, regimented inhabitant of a cyber purgatory created by unseen elites? Will the children of tomorrow be smiling depressives of a technocratic dystopia? Watch the full documentary now (playlist - 2 hours, 07 minutes) Inner Worlds, Outer Worlds Part one of the film Inner Worlds, Outer Worlds. Akasha is the unmanifested, the “nothing” or emptiness which fills the vacuum of space. As Einstein realized, empty space is not really empty. Saints, sages and yogis who have looked within themselves have also realized that within the emptiness is unfathomable power, a web of information or energy which connects all things. This matrix or web has been called the Logos, the Higgs Field, the Primordial OM and a thousand other names throughout history. In part one of Inner Worlds, we explore the one vibratory source that extends through all things, through the science of cymatics, the concept of the Logos, and the Vedic concept of Nada Brahma (the universe is sound or vibration). The Pythagorian philosopher Plato hinted enigmatically that there was a golden key that unified all of the mysteries of the universe. The primordial spiral is the manifested world, while Akasha is the unmanifested, or emptiness itself. Image Credit

Zeitgeist: The Movie The Movie is a 2007 documentary film by Peter Joseph. It asserts a number of conspiracy theory-based ideas, including the Christ myth theory, alternative theories for the parties responsible for the September 11th attacks and that bankers manipulate the international monetary system and the media in order to consolidate power. The film was officially released online on June 18, 2007 on zeitgeistmovie.com. It has been criticized for reported factual inaccuracies, and the quality of its arguments. A sequel, Zeitgeist: Addendum, focuses further on the monetary system and advocates a resource-based social system influenced by the ideas of Jacque Fresco and The Venus Project. Following Zeitgeist: Addendum, Peter Joseph created an organization called The Zeitgeist Movement to promote the ideas of Fresco’s Venus Project. The third film was released globally on January 15, 2011 called Zeitgeist: Moving Forward. its topics focused on human behavior, technology, and rationality.

fluid tech The topics of inventions and the principles of the structural elements Pipes, machines, vehicles The inventions are grouped under three headings. The first deals with liquid movement in/through solid, immobile bodies. This group deals primarily with the movement of fluids in pipe-systems. The second group describes the relationships between fluid in motion and moving solid bodies. The third and final group concerns itself with the movement of solid bodies through fluid. Pipe-inventions On the basis of the known phenomena of flux in pipes, the general physical foundations of flux-structure will be explained. Diverse structural elements will be discussed, from the intake into the pipe from a container, the shape of pipes, pipe-bends, constriction of pipes, expansion of pipes etc. to the design of jets. With linear flux in pipes, the friction with the pipe walls has a negative influence on the velocity of the liquid. Instead, fluid must generally be driven in a ´potential-twist-flow´.