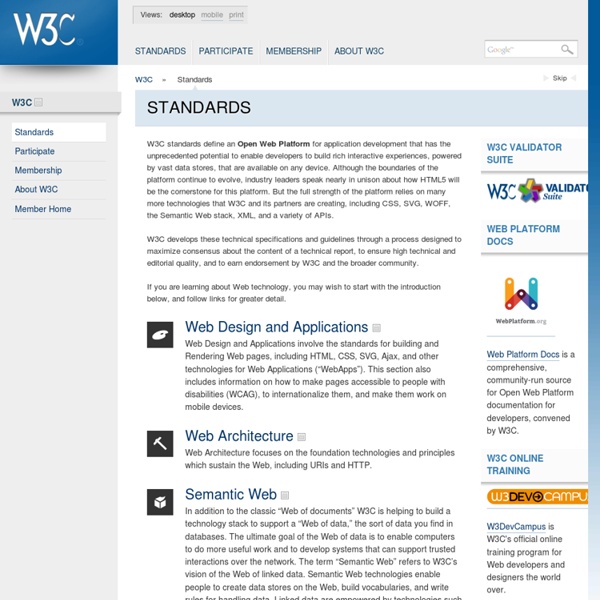 W3C standards define an Open Web Platform for application development that has the unprecedented potential to enable developers to build rich interactive experiences, powered by vast data stores, that are available on any device. Although the boundaries of the platform continue to evolve, industry leaders speak nearly in unison about how HTML5 will be the cornerstone for this platform. But the full strength of the platform relies on many more technologies that W3C and its partners are creating, including CSS, SVG, WOFF, the Semantic Web stack, XML, and a variety of APIs. W3C develops these technical specifications and guidelines through a process designed to maximize consensus about the content of a technical report, to ensure high technical and editorial quality, and to earn endorsement by W3C and the broader community. If you are learning about Web technology, you may wish to start with the introduction below, and follow links for greater detail.

National Science Foundation (NSF) Events - Building Watson: An Overview of the DeepQA Project Event Building Watson: An Overview of the DeepQA Project CISE Distinguished Lecture Series March 6, 2012 2:00 PM to March 6, 2012 3:00 PM NSF Room 110 Dr. David Ferrucci, IBM Computer systems that can directly and accurately answer peoples' questions over a broad domain of human knowledge have been envisioned by scientists and writers since the advent of computers themselves. An exciting proof-point in this challenge was developing a computer system that could successfully compete against top human players at the Jeopardy! Dr. This event is part of Previous Distinguished Lecture. Meeting TypeLecture Contacts Dawn Patterson, (703) 292-8910, dpatters@nsf.gov NSF Related Organizations Directorate for Computer & Information Science & Engineering Public AttachmentsFyer for Dr.

HTML Tutorial untitled RDF - Semantic Web Standards Overview RDF is a standard model for data interchange on the Web. RDF has features that facilitate data merging even if the underlying schemas differ, and it specifically supports the evolution of schemas over time without requiring all the data consumers to be changed. RDF extends the linking structure of the Web to use URIs to name the relationship between things as well as the two ends of the link (this is usually referred to as a “triple”). This linking structure forms a directed, labeled graph, where the edges represent the named link between two resources, represented by the graph nodes. Recommended Reading The RDF 1.1 specification consists of a suite of W3C Recommendations and Working Group Notes, published in 2014. A number of textbooks have been published on RDF and on Semantic Web in general. Discussions on a possible next version of RDF W3C has recently set up a new RDF Working Group, whose charter is to make a minor revision of RDF. Last modified and/or added All relevant tools