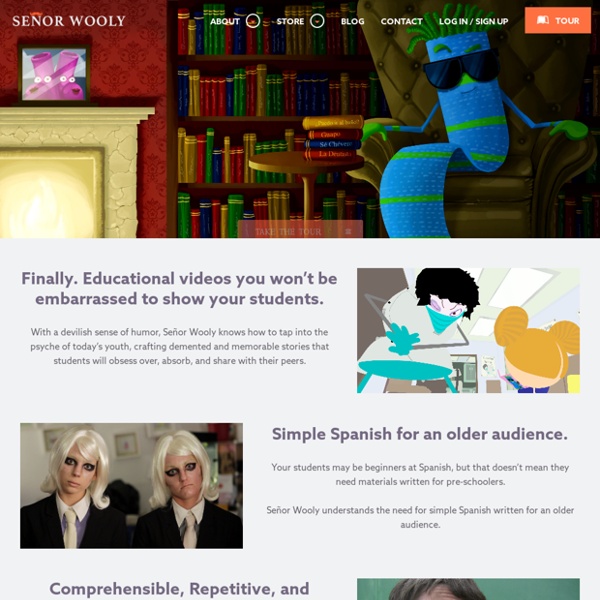 Storyboard That: The World's Best Free Online Storyboard Creator Señor Wooly Log In To log back in, start by finding your school. Don't see it? Tell your teacher to contact us, and we'll get it fixed right away. Don't see your teacher? Spanish Children's Stories - The Spanish Experiment Well-known children's stories translated into Spanish and spoken by a native Spanish speaker. Great for kids... and adults too! Read along in Spanish or English.

Countries. Nationalities Countries – crosswords countries – crosswords Countries – large numbers countries – card game Countries and Nationalities – games for speaking about oneself and the others – game designed by EngliSHip who are you – fake identities – beginners – teacher’s notes 1- page 1 in 7 Word Cloud Story Activities - Srta Spanish Are you in search of a new way to use a reading in class? Sometimes it feels like our activities are getting stale and you just need a new way to approach things, or maybe you just need a new a low-energy idea for delivering some input to your students. Whatever the case, this is a nice easy option to throw into your rotation of reading activities! languages online A few additional features on this website make use of cookies. Learn more Got it - Let's go! All units in this section are designed and written by Francisco Villatoro.If you spot a mistake or have any comments, please send me an e-mail

R.I.P. Ghost Hunter I have really sad news. I tried my damnest to find the Ghost Hunter from the BBC Archives. After my visit to their offices in London, I had direct contacts with several BB/CBBC Staff who tried to help me, until they found the one in charge, who couldn’t. Some extracts from the letters are cited here: “The programme was produced for the BBC by Zenith North, who are no longer trading… …Sorry not be able to help any further. What students say about acquiring vocab through reading I love asking for student feedback. So after our classes read El Escape Cubano or El Capibara Con Botas I asked for student feedback using google forms. Both of these books include many cognates, but I also wanted students to hear the correct pronunciation of the words, so we listened to the audiobooks. The main comment was that students could hear the proper pronunciation but also the tone of the reader also helped their comprehension. I’ll be interested in seeing how this affects if more students will use the audiobooks during our FVR time this year. See full student responses here.

Mexican Grandmother creates a YouTube channel to teach homemade recipes. It already has 265 thousand subscribers - The Mazatlán Post “From my ranch to your kitchen,” is Mrs. Angela’s humble program. It shows us that the culinary legacy of older adults can also be shared through social networks. We live criticizing the ‘influencers’, those people who most of the time seem to have a kind of life when it really isn’t, constantly dislike us. There are also the ‘YouTubers’, those girls who show a world of fantasy and quite artificial or unauthentic, be careful for those who love all this, but there are those who opt for something more real. And the reception has been much better than expected, has only one month on YouTube and already has 265 thousand subscribers with thousands of visits.