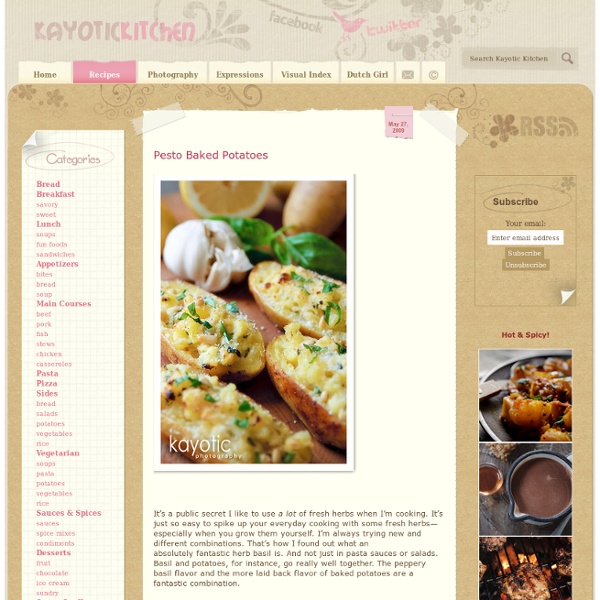 It’s a public secret I like to use a lot of fresh herbs when I’m cooking. It’s just so easy to spike up your everyday cooking with some fresh herbs—especially when you grow them yourself. I’m always trying new and different combinations. That’s how I found out what an absolutely fantastic herb basil is. And not just in pasta sauces or salads. Basil and potatoes, for instance, go really well together. Ingredients: 3 potatoes (8 oz each) 1 large shallot 2 garlic cloves 1/2 cup cream (I’ve used low fat) 1/2 cup vegetable broth fresh basil pine nuts pepper salt oil Directions: I’m using 1 large potato per person. Give them a really, really good scrub. Lightly brush the potatoes with olive oil. And sprinkle a generous amount of salt on top. I’ve put some baking paper on a baking sheet and placed the potatoes on top with the oiled side down. Bake them at 400F (200C) for about an hour. After I sat down, drank coffee and read sleazy tabloids for about half an hour, it was time to get back to work. Related:  Hauptgang

Hasselback Potatoes These Hasselback potatoes looks beautiful, don't' they? Here, I also added several cloves of garlic to these Swedish version of baked potatoes to enhance the flavor. It turned out great, they were very delicious, crispy on the outside and tender on the inside.. Hasselback Potatoes (Printable Recipe) Ingredients 6 Medium Size Potatoes 2 - 3 Cloves Garlic, thinly sliced 2 Tbsp Olive Oil 30 g Butter Maldon Sea Salt Freshly Ground Black Pepper Method Preheat the oven to 220˚C (425˚F). Arrange the potatoes in a baking tray and insert the garlic in between the slits. Bake the potatoes for about 40 minutes or until the potatoes turn crispy and the flesh is soft.

Honey Lime Chicken (inspired by Sunset Magazine) Leave it to Sunset Magazine to come up with a variety of delicious marinades to suit any purpose and serve them up in one cool issue (August 2010). Recently I made the two "Perfect for Seafood" marinades - Lemongrass, Chile and Coconut Milk Shrimp and Chile Ginger Shrimp. Both were fantastic, so this time I decided to try the honey lime marinade from the "Perfect for Chicken" section and I was very pleased with the outcome.It doesn't get any easier than this - 5 simple ingredients (not including the salt and pepper), marinade overnight, and throw on the grill. Then sit back and enjoy the lime-infused, honey-crusted chicken. Serves 4-6 Marinade: 1/4 cup extra virgin olive oil 1/4 cup freshly squeezed lime juice (2 limes), plus the zest of both limes 2 Tablespoons honey 1/2 teaspoon cayenne pepper 1 teaspoon kosher salt 1 teaspoon freshly cracked black pepper 2 pounds of chicken (I used boneless skin-on breasts, but use whatever suits you)

Oven Roasted Potatoes | My Adventures In The Country When I heard this month’s Kitchen Bootcamp Challenge was potatoes, I was pumped. Originally, I had great plans for the sweet potatoes still in my basement from last fall, but after researching and chatting with the hubby, I decided to go with Yukon Gold potatoes instead. My husband isn’t a huge fan of sweet potatoes and I wanted to make something he would enjoy too, so that’s how I settled on this oven roasted potato recipe. Yukon Golds are our favorite potato to grow in the garden and they absolutely melt in your mouth when freshly dug from the garden. I did some more searching through The Professional Chef and on the web and actually settled on a recipe from epicurious.com. Don’t get me wrong, there was nothing wrong with the flavor, just a personal preference as far as how potato-coated my hands were when I was done. Notes:The above link to The Professional Chef is an amazon affiliate link. You Might Also Like:

Chicken Cordon Bleu Rollups Thin slices of chicken, ham, and cheese are rolled up, covered in bread crumbs, and baked until crisp, then topped with a homemade parmesan pepper sauce. We call them Chicken Cordon Bleu Rollups and they are absolutely delicious! This is going to sound like an advertisement for Perdue Chicken, but it’s not, I promise. The way this Chicken Cordon Bleu Rollups recipe originated all started with a little mistake I made at the grocery store. I didn’t have anything planned to do with thin cuts of chicken so it took some thinking to figure out what to make. Traditional chicken cordon bleu has been one of my favorite meals, so I wasn’t quite sure how these non-traditional rollups would work out. *I started with a package of 6 chicken slices which was a little over a pound of meat. PS: Happy Valentine’s Day! Prep Time: 15mn Cook Time: 25mn Total Time: 40mn

Spicy Fried Shrimp Recipe Directions Make the sauce: Mix the mayonnaise, chili sauce, honey, 1/4 teaspoon salt and 1 tablespoon water in a large bowl; set aside. Prepare the shrimp: Heat about 2 inches of vegetable oil in a heavy-bottomed pot or Dutch oven over medium heat until a deep-fry thermometer registers 350 degrees. Working in batches, dredge the shrimp in the flour mixture, shaking off any excess, dip in the beaten eggs, then return to the flour mixture, turning to form a thick crust. Toss the shrimp with the prepared sauce. Photograph by Stephanie Foley idaho sunrise (baked eggs and bacon in potato bowls) » Gimme Some Oven Idaho Sunrise (Baked Eggs & Bacon In Potato Bowls) Ok, what is up with eggs?!!? They seem to be in everything lately! From topping pizzas, to burgers (shout out to Blanc, for KC locals!), to garnishing soups…apparently the incredible, edible egg is now tres chic. Intriguing, but I’m all for it! One creative idea for baking eggs that seemed new and notable (at least to me) is this great recipe I stumbled across online. Definitely a fun twist on the typical eggs, bacon and hash browns. Ingredients 1 large baked potato (russett or sweet) 1 Tbsp. butter 2 eggs 2 strips bacon, cooked and crumbled 2 Tbsp. shredded cheddar or gouda cheese 1 Tbsp. fresh parsley, chopped salt and freshly ground black pepper Method Lay the baked potato on its side, and use a knife to carefully cut off the top third of the potato. Place 1/2 tablespoon of butter in the middle of each bowl. Bake at 350 degrees F for 20-25 minutes, or until the egg whites are set. Ali’s Tip: