Indonesia is burning. So why is the world looking away? 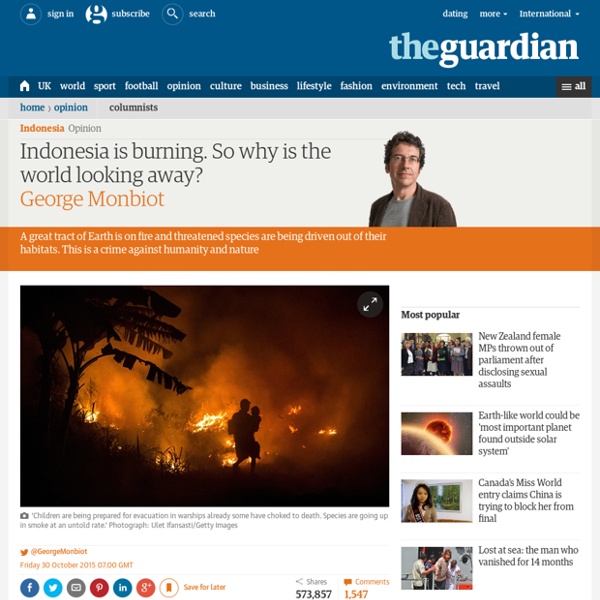 I’ve often wondered how the media would respond when eco-apocalypse struck. I pictured the news programmes producing brief, sensational reports, while failing to explain why it was happening or how it might be stopped. Then they would ask their financial correspondents how the disaster affected share prices, before turning to the sport. As you can probably tell, I don’t have an ocean of faith in the industry for which I work. What I did not expect was that they would ignore it. A great tract of Earth is on fire. And the media? What I’m discussing is a barbecue on a different scale. But that doesn’t really capture it. One of the burning provinces is West Papua, a nation that has been illegally occupied by Indonesia since 1963. Nor do the greenhouse gas emissions capture the impact on the people of these lands. It’s not just the trees that are burning. Why is this happening? The president, Joko Widodo, is – or wants to be – a democrat.

Erik Meijaard: Indonesia's Fire Crisis — The Biggest Environmental Crime of the 21st Century Large parts of Indonesia have now been in a state of emergency for over a month. Why has there not been a nationally declared total fire ban advertised 24/7 on all television channels? Why has there not been a clear message: you burn — you go to jail? Why the Philippines is Being Battered By Yet Another Fearsome Typhoon Updated Monday at 11 a.m. ET For storms like hurricanes and typhoons, as in real estate, it's all about location, location, location. Unfortunately for the Philippines—which is being battered by Typhoon Koppu—the island nation is in a prime spot to get hit with an average of 20 typhoons a year. Koppu made landfall early Sunday morning local time as a strong category 3 with winds nearing 124 miles (200 kilometers) per hour. The storm, known as Lando in the Philippines, toppled trees and buildings, killing a 14-year-old boy and a 62-year-old woman.

5 Innocent Animals Suffering at the Hands of the Palm Oil Industry When pondering the harmful effects the palm oil industry has on the planet, it’s easy to initially think only about the damage done to the land and environment. However, at best, the wildlife that previously called those lands their home are left without their original habitats essential for their survival. And the worst-case scenario — death — unfortunately happens to them all too often. Because the palm oil tree grows only in tropical equatorial regions around the globe, rainforests in these regions (particularly in Southeast Asian countries such as Malaysia and Indonesia) are being rapidly deforested to make way for palm oil tree plantations. Of course, all living creatures that reside in this diverse ecosystem are negatively impacted by the loss of their habitats, but several threatened or endangered species are facing extinction due to this industry. 1.

Shutting the flood gates Shutting the flood gates 19 October 2015 In 1953, more than 300 people died in the UK alone when heavy storms swept a high spring tide over sea defences and across coastal towns in north-east England and Scotland. Today floods still make headlines but our ability to limit their effects has come a long way. Adele Walker explains why. One in six properties in England is at risk of flooding - maybe yours is one of them. Deforestation, Human Rights Abuse, Animal Extinction and the One Industry That Unites Them All Palm oil is a vegetable oil taken from the palm fruit grown on oil palm trees. These trees are native to Western Africa. Because of the demand for palm oil, which is used in a variety of food products, it is now grown throughout Africa and also in Asia, North America, and South America. There is, however, a devastating cost to feeding the demands for palm oil that comes in the from of climate change, animal cruelty, deforestation, and human rights violations. According to the WWF, “300 football fields of rainforest is cleared each hour to make way for palm oil production.”

CGF3M-Physical Geography The Family who Inspired “The Impossible” Click on the link to read the news story about the family who inspired the movie you will finish today, “The Impossible”. I would love to hear your thoughts and comments. What did you think about the movie? Did it give you a better idea of the devastation involved in a tsumani? Do you think it was accurate? untitled WHEN they spoke in the past of the growing irrelevance of international borders, this is not what the leaders of India and Pakistan had in mind. They meant the march of globalisation. But their countries have always been linked by far more primordial forces. The epicentre of the huge earthquake that struck them on the morning of October 8th was near Muzaffarabad, the capital of Pakistani-administered Kashmir. But it was also felt across the Indian-held part of the disputed territory, as well as in Afghanistan to the north and as far south as India's capital, Delhi. It was in Kashmir and northern Pakistan, however, that it wrought devastation.

Lost Lake in Oregon Mysteriously Disappearing Down a Hole Something very strange is going on in Oregon, and it's been happening as long as anyone can recall. Every year in the spring, a lake in central Oregon's Willamette National Forest mysteriously drains down a huge hole. Justin Renshaw/imgur.com In the wintertime, nearby streams drain into the lake and cause it to fill with water. While that's certainly not anything unusual, the lake goes under a rather bizarre transformation come spring.

India: 200,000 refugees in Assam's devastating floods More than 40% of the region is at risk and severe floods occur every few years, eroding riverbanks and dumping large amounts of sand on farmland, often rendering lands infertile. Heavy flooding has affected more than a million people in the north-eastern Indian state of Assam, with 45 dead and more than 200,000 in relief camps. And yet there is still very little coverage of the disaster in the international media - perhaps not surprising when you consider even most Indians aren't paying attention. But they should - and so should you. The fact a region that is flooded regularly should be so unprepared for the latest downpour is scandalous, as is the shortsighted or uncaring government response.

10 Surprising Facts About Yellowstone Yellowstone, the world’s first—and still most famous—national park, was established in 1872, the year the Brooklyn Bridge was being built and President Ulysses S. Grant completed his first term in the White House (then called the Executive Mansion). That same year Jules Verne was finishing up Around the World in 80 Days and Thomas Edison perfected the duplex telegraph. But nothing changed the world like Yellowstone.

Lesson Ideas for Teachers Pre & Post Visit Material... We have worked very closely with practicing teachers to develop a range of activities suitable for you to use in the classroom, the school hall or even the playground. All activities aim to help you extend your pupils experience at Dynamic Earth creating something that has a greater longevity, looking at topics from different perspectives or simply increasing the depth of learning back at school. All activities are linked intrinsically with the Curriculum for Excellence, with many being cross curricular and encouraging mixed stage learning. Teacher resources In support of this topic we have produced some teacher resources for use with your class.