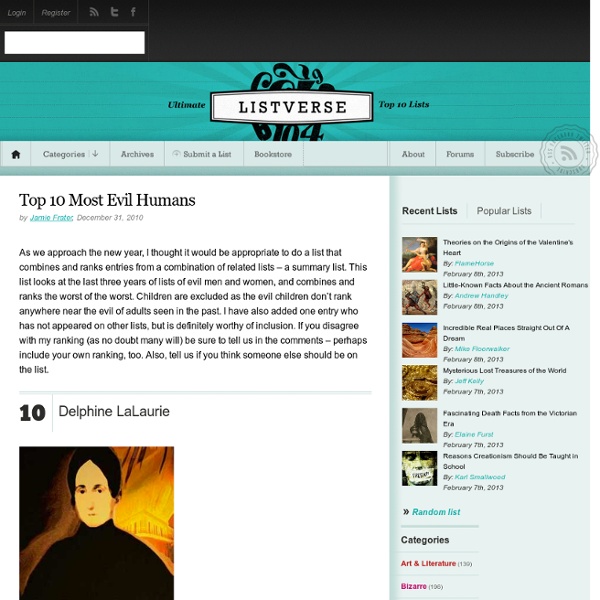 Crime As we approach the new year, I thought it would be appropriate to do a list that combines and ranks entries from a combination of related lists – a summary list. This list looks at the last three years of lists of evil men and women, and combines and ranks the worst of the worst. Children are excluded as the evil children don’t rank anywhere near the evil of adults seen in the past. LaLaurie was a sadistic socialite who lived in New Orleans. Known as The “Bitch of Buchenwald” because of her sadistic cruelty towards prisoners, Ilse Koch was married to another evil Nazi, who served in the SS, Karl Otto Koch, but outshone him in the depraved, inhumane disregard for life which was her trademark. Ishii was a microbiologist and the lieutenant general of Unit 731, a biological warfare unit of the Imperial Japanese Army during the Second Sino-Japanese War. Jiang Qing was the wife of Mao Tse-tung, the Communist dictator of China. Jamie Frater Jamie is the founder of Listverse. Related:  3) DS2: RnF

Get Up, Stand Up . Revolutionary Music . We Shall Overcome By Ed Ward You'd think, because different political movements have different specific goals and details, that a universal song of struggle would be impossible, and, for the most part, you'd be right. But nothing comes closer than "We Shall Overcome." Today, most people think it's a traditional Negro spiritual, but that isn't the case. "I'll Overcome Some Day" was initially published in 1901, in the first collection of original African-American sacred music, and quickly adopted, as were Tindley's other hymns, by black congregations across the United States. It was almost inevitable that a song like this would be taken up by the civil rights movement in the United States, since the impetus for the movement came from a number of different sources, including two where the song was sung often.

Top 10 Civilizations That Mysteriously Disappeared Throughout our history, most civilizations have either met a slow demise or were wiped out by natural disasters or invasion. But there are a few societies whose disappearance has scholars truly stumped: 10. The Olmec One of the first Mesoamerican societies, the Olmec inhabited the tropical lowlands of south-central Mexico. Where did they go? Around 400 BC the eastern half of the Olmec’s lands was depopulated- possibly due to environmental changes. 9. The Nabateans were a Semitic culture that inhabited parts of Jordan, Canaan and Arabia from around the sixth century BC. During the fourth century AD, the Nabateans abandoned Petra and no one really knows why. 8. The Aksumite Empire began in the first century AD in what is now Ethiopia and is believed to be the home of the Queen of Sheba. According to local legend, a Jewish Queen named Yodit defeated the Aksumite Empire and burned its churches and literature. 7.The Mycenaeans 6. 5.The Cucuteni-Trypillian Culture 4. 3.The Minoans 2.The Anasazi 1.

More Classic Pop Icons In A Different Light (PICS 05 Oct These images were gathered from all over the internets but it has come to our attention that a few of them can be purchased as shirts from various sites. If you’re looking to find some terrific t-shirts (beyond just what you may see here as well) visit Threadless , Shirt Woot! , Tee Fury and Glennz Tees . Check out Part 1 in this series here , Part 2 here , Part 3 here and Part 4 here . 1999 Seattle WTO protests Organizations and planning[edit] Planning for the demonstrations began months in advance and included local, national, and international organizations. Among the most notable participants were national and international NGOs (especially those concerned with labor issues, the environment, and consumer protection), labor unions (including the AFL-CIO), student groups, religiously-based groups (Jubilee 2000), and anarchists (some of whom formed a black bloc).[2] The coalition was loose, with some opponent groups focused on opposition to WTO policies (especially those related to free trade), with others motivated by pro-labor, anti-capitalist, or environmental agendas. However, others were more interested in taking direct action including both civil disobedience and acts of vandalism and property destruction to disrupt the meeting. Corporations targeted[edit] Lead-up months[edit] "N30"[edit] Seattle police on Union Street, during the protests. December 1st[edit] Media response[edit] See also[edit]

Easter Eggs - Eeggs.com Stories of residential school survivors The young girl, whose mother had died in childbirth, was being cared for by her aunt and uncle. “But I came into the wrong hands when I was six,” Flanders told attendees at the Truth and Reconciliation Commission this week. As TRC commissioners Marie Wilson and Chief Wilton Littlechild listened, Flanders described the sense of sheer isolation and loneliness that she felt as a boarding student at St. For 10 years, she missed out on typical childhood experiences, like knowing what it was like to celebrate a birthday, or going home to see her family for Christmas. “I felt so alone,” she said, through tears. As Flanders shared her story, her sons sat on either side of her, reaching over at times to place a comforting hand on her shoulder. “Now I can say to myself that I’m not alone,” she told audience members, many of them shedding tears themselves. In their testimonies to the commission, some speakers have described memories of sexual or physical abuse.

Gothic Industrial Culture * April 14, 2014 * Avoiding Bourbon Posting this early for all of you on VF. Second strip with Guest Appearance by VoltaireNYC * April 12, 2014 * VF Video Poetry Contest Finalists! Thanks to everyone that entered! * April 11, 2014 * VF Store Sale - 30% OFF Entire Site! This weekend only - get 30% OFF Everything at the VF StoreClick Here go to shopping! Cybertron Video Here's the video from last month's Cybertron vs Stimulate event here in NYC: Video Features Nachtmahr and Ludovico Technique Next Cybertron is TOMORROW! Cybertron Info Here * April 10, 2014 * VF Asylum Hair Dye: Pick the color names Thanks to everyone that submitted color name suggestions for our upcoming hair dye line! Poll links below, Cast your vote on each poll! * April 08, 2014 * VF models sets * April 07, 2014 * VF Video Poetry Contest We had some requests for an extension on the VF Video Poetry Contest, so you guys get 2 extra days. That's New Orleans For You Thanks to VoltaireNYC for letting me have him in my comic! * April 06, 2014 *